Marriage Is a Private Affair

Cultural, gender, religious and racial peculiarities can either impede or enhance effective human communication and understanding. According to Chinua Achebe, “Marriage is a Private Affair”. We may ask what is marriage? It may be defined in many ways Prof. Makoine in his guideline sheet defines it interactively as “wedlock/ relationship in which two people have pledged themselves to each other as husband and wife with or without legal sanction. ”

According to the same definition a private affair is “exclusive/ belonging to a particular person or group event or happening.

Don't use plagiarized sources.
Get Your Custom Essay on Marriage Is a Private Affair Just from $13,9/Page

Marriage is fundamental ,it’s a private affair, the author tries to show that marriage means different things in the different cultures also marriage and private are interchangeable it mean two or more people get into contract, whereas in some culture it also a unity establish between two or more people. Marriage is an exclusive event that happen between two people. According to the writer, he does not exclude the family out of the process of marriage but he concludes that whatever decision we make it is considered to be private affair which has to be between people that sign the contract.

The two people involved take responsibility for the outcome of their decision. So as the saying goes, “marriage is for better for worse” What are other original and contemporary definitions of marriage? The original concept as religiously depicted both in Islam and Christianity is that marriage is a bond between a man and a woman, where both become one. There is an exchange of dowry for security and goodwill. The Webster’s New Pocket dictionary defines marriage as the “married life”, and marry as “join as husband and wife, 2. take as spouse and 3. nite”.

The implications of such definitions is that there is a dichotomy in meanings culturally, racially and religiously. The concept of privacy of marriage can be read in many ways: it could mean private between two people irrespective of their family’s feelings. It could also be its my business whether I want to marry a male or a female, I don’t need anyone’s support or permission. I have the freedom to choose. In” “Chinua Achebe’s” drama the freedom to choose is still available to “Nnaemeka” but the choice he makes is painful to him and the family.

The impending pain is envisaged by “Nnaemeka”and this makes him say, “It would not be wise to break the news to him by writing. A letter will bring it upon him with a shock, I am quite sure about that. ” In this case “Chinua Achebe” portrays the privacy of marriage to a particular tribe and the difficulty when people have to break that privacy and go outside their tribes to choose a spouse. The reaction of “Nnaemeka”’s father to the situation is indeed dramatic, he could not imagine his son marrying someone whose family he did not know.

This is vividly displayed in the following conversation in the story, “ Whose daughter is she, anyway? “She is Nene Atang. ” “What! ” All the mildness was gone. “ Neneataga, what does that mean? ” The father felt this was beyond acceptance and his pain was palpable. In this case they are of the same religion even though “Nnaemeka”’s father may not accept this. He disparages the future wife’s religion by saying, “Teacher did you say? If you consider that a qualification for a good wife I should like to point out to you, “Emeka”, that no christian woman should teach.

The privacy of the of culture and language was broken and the old man’s heart was broken too as he felt the loss of his son. He goes on to try to dissuade his son to no avail and the writer admits that, “his father eventually gave hm up as lost. ” Emeka exercised his freedom but at the cost of loosing his community and family’s support and inclusion. The act itself was considered sacrilegious as an old man said weeks later, “It has never been heard,” people do not marry across language lines. Privacy was broken! However the issue of love transcends culture, religion and language barriers.

Instead of Emeka to change his mind he hoped his father would heal. The story says, “Nnaemeka for his own part, was deeply affected by his father’s grief. But he kept hoping that it would pass away” (“marriage is private affair”, page …). He was adamant though about marrying the woman of his dreams despite the strong opposition. He goes on to say, “Nene Atang from Calabar. She is the only woman I can marry,” (page… ). The reality though is in the end we weigh what is truly important as Nnaemeka’s father found out. The story brings us to the point of his awakening,“His mind immediately returned to the children.

How could he shut his door against them? ” He realizes that as a father his daughter- in – law had reached out to him with an arm he couldn’t resist, the arm of compassion to your own blood. The writer concludes by saying, “That night he hardly slept, from remorse – and a vague fear that he might die without making it up to them. ” (page …) the father was stubborn and being xenophobic, he was gloomy and cut relationship off with his grandchildren since he was not dynamic in nature and could not accept changing times.

Marriage Is a Private Affair. (2017, Jan 05). Retrieved from https://studymoose.com/marriage-is-a-private-affair-essay 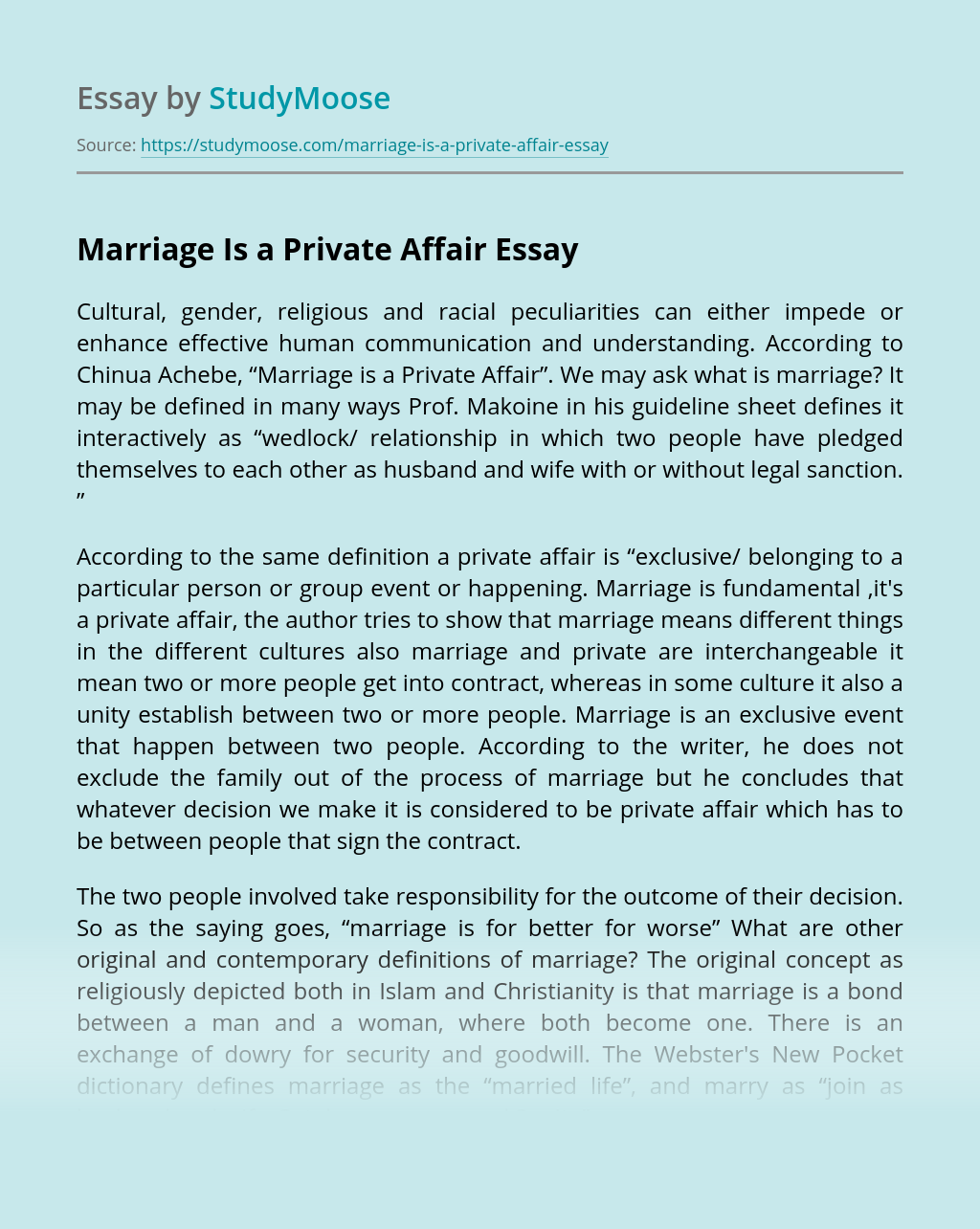 "You Touched Me" D.H. Lawrence

Due to the variance of education background, social environment and personality derived from human nature, every individual has his/her distinct standard of living, social sense and emotion. People who have different minds and living objectives interact with each other in every human community, and the morality has been historically obeyed by general public as the...

Chaucer's "The Miller's Tale" as a Parody of Courtly Love

A lady is a creature to be treated like an angel of God. She is beautiful, respectable, and chaste. The sanctity of a lady is not just worth defending, it is worth passing away for. Her glove on plate mail is a harmonious battle cry, an inspiration both powerful and divine. Always painfully correct and...

Get Essay
A Wedding I Have Attended

Last year, I went to Taiping to attend my cousin’s wedding. She, unlike most of my family members, is a Christian. So, this was the first time I have been to a Christian wedding. Her wedding was held in the Chinese Methodist Church. The wedding had two receptions in two different places, one in Taiping...

“The Boat” written by Alistair MacLeod tells a story about a father’s life and how he lived as a fisherman. The narrator is an adult man who looks back on his life of when his father was still living because even though he got a university education, he now wants the life his father had. He expresses how his father always wanted him to become something bigger and better then...

Analysis of Fire and Ice by Robert Forst

This article tries to analyze the unique features in structure, words, phonology, syntax and rhetoric in the poem of 40-Love by British poet Roger McGough in order to have a deeper understanding of the content and form of a poem. Keywords: McGough, 40-Love, Love, Style 1. Introduction It is well known that in a variety...