Toyota Motors is preparing to launch the new Toyota Prius Hybrid. The Prius will be using the Hybrid Synergy Drive (HSD) with features combining highly efficient petrol engine and an electric motor. The electric vehicle (EV) allows the Prius to run purely for low noise and zero fuel consumption (Toyota Company, 2012). Due to the ever increasing presence of green revolution, Toyota Motors wants to take advantage of the potential increase in demand for hybrid vehicles (Boschert, 2007). Having been voted the World’s No 1 Hybrid in 2010 (Toyota, 2013), Toyota Motors have made an executive decision to continue producing the Prius, giving the world its first mass-produced hybrid car.

As a result, even before launching this new product it is important for Toyota Motors to prepare strategic marketing place so that the Toyota Prius can impact the marketplace.

Let us take a look at the Prius with respect to its exterior, interior, performance, safety and price (Toyota Company, 2013).

Exterior: The Prius has a distinct design shaped by using a comprehensive approach to aerodynamic theory and performance, contributing to its powerful performance and outstanding fuel efficiency.

Interior: The interior of the Prius expresses the spirit of innovation which is warm and inviting. The Prius is fully equipped with soft lines which flow around the occupants as passengers and drivers alike relax comfortably.

Performance: The Prius is a combination of highly efficient engine with a fully equipped electric motor. The HSD provides a smooth, responsive performance which includes low fuel consumption and low exhaust emission.

Safety: The Prius ensures peace of mind. This means that it is fully equipped with active and passive safety measures that integrate the use of advanced technologies; helping to ensure the highest level of safety.

Price: The Prius is currently priced at RM 139,915 with insurance for consumers in Peninsular Malaysia. As technology for the Prius increase, Toyota will surely lower its market price so as to make it more affordable for consumers.

According to a survey done by J. D. Power published in 2012, almost 23% of respondents have indicated that the next car they would buy or lease would most likely be a hybrid car such as the Prius (Tuttle, 2013). Toyota being the top manufacturing hybrid car company has certainly managed to push beyond its original niche status and become a best seller across the globe.

The Prius continues to face intense competition from other automakers. One of Toyota’s main competitors is Ford. Ford has recently launched the C-Max. The C-Max has been impressive recording higher sales than the Prius V (Turtle, 2013). In January 2013, Bloomberg reports that Ford hybrid sales have increased five-fold. Ford has sold 6000 hybrids in January 2013 as compared to only 1200 in January 2012 (Trudell, 2013). Erich Merkle, Ford’s sales analyst has even reported that “we are looking toward 2013 as being a record sales year for our hybrid vehicles.” Also, Ford’s market share has increased from 7% in 2012 to 16% in 2013.

We will be using the PESTLE analysis as a tool to clearly identify and analyze the key drivers of change in the business environment (Johnson, Scholes and Whittington, 2008. As stated by Orfano, this PESTLE tool allows the assessing of the current environment and potential changes (Orfano, 2011). We shall look at these 6 factors based on the research done by Sin and co (Sin, 2012).

Political Factors: The Prius has a positive political impact because by manufacturing these hybrid cars, a country reduces the dependence on petrol. This is true for countries that do not produce oil.

Economic Factors: Consumers will begin to select the Prius because of the fuel savings over time benefits. Also, the cost of insurance and road tax for the Prius is relatively lower that a normal gasoline car.

Social Factors: Since change in the climate is a serious issue, Toyota should produce a vehicle which will not bring pollution to the environment. Although the Prius is significantly higher in value than conventional cars, with technology increasing in the near future it is very likely that the price of the Prius will decline accordingly as the Prius’ technology become more familiar.

Technological Factors: Hachman suggests the technology used in Plug-In Hybrid Electric Vehicles is the idea of using the batter powered car. The recharging time is one and a half hours for 240V AC or three hours for 120V AC. The plug-in will switch to hybrid mode, providing an estimated 49 miles per gallon (Hachman, 2011). In order to increase mileage, the Prius is built from a body of lightweight materials such as carbon fiber, aluminum, magnesium and titanium.

Legal Factors: According to the United States department of energy lead programs office (LPO), it encourages advance clean energy technologies. This is to contribute meaningfully to the objectives of including job creation, reducing dependency on foreign oil, improving environmental legacy and enhancing American competitiveness in the global economy of the 21st century (U.S. Department of Energy, 2005).

Environmental Factors: The Prius unlike other cars does not produce gases such as carbon dioxide, carbon monoxide, sulphur oxides, oxides of nitrogen, hydrocarbon and lead which can cause many health problems. Not only does the Prius, provide a public benefit but at the same times it does not compromise on its safety, quality and functionality.

It is importance to identify Toyota’s organizational strengths and weakness together with its opportunities and threats. The ultimate goal is to identify Toyota’s core competencies – things that Toyota has or does relatively well as compared with competitors (Schermerhorn, 2011).

|Strengths |Weaknesses | |Best fuel efficiency of any midsize car |Fuel economy varies and optimization requires careful driving | |Spacious interior |Premium price compared to similar non-hybrid cars | |Good performance compared to non-hybrid vehicles |Other cars are available in the same price range with significantly | |Comfortable |higher performance | |Quiet at all speeds |Requires more energy to build than comparable non-hybrid cars | |Smoother transmission than most other cars | | |Appeal of latest technology | | |Minimal impact on environment | | |Excellent scoring on crash test | | |Opportunities |Threats | |It is likely that petroleum will cost more in the future as supplies|High mileage clean diesel based cars are becoming more available and| |diminish which may increase demand |will grab market share | |Awareness of environmental concerns is growing |Other hybrids such as the Ford C-Max will soon enter the market | |Sales are likely to spread new markets in developing countries over |Toyota’s recent negative press and widespread recalls are likely to | |time |scare some potential buyers. |

Increase awareness of Toyota Prius by 50% in the next 3 years targeting new markets in developing countries.

Creative Strategy: The Toyota Prius offers features that no other car offers. This in itself is its unique selling point and should be emphasized in market promotions. As a start to achieve the increase in awareness, promotion should concentrate on the education aspect.

Communication Mix: As for communicating the Prius, two factors should be considered a) the type of product (high involvement) and the stage in the product life cycle (introduction). With regards to high involvement, personal selling is important because it provides more conviction of purchase. Personal selling will be carried out by the local car dealers who need to have sufficient knowledge on the Prius. Personal selling will also include targeting corporate companies or fleet buying segment. As for the stage in the product life cycle, sales promotion is most effective trigger for a purchase. Sales promotions are useful at the beginning of the product life cycle to increase acceptance or provoke a test drive.

Media Strategy: The internet plays an important role. A direct mail will be sent to potential buyers and enable buyers to purchase the Prius online which would include a downloadable e-brochure. All advertisements will bear the Prius web address to make it easy for buyers to find it. Besides that, print adverts will be placed in quality newspapers especially those newspapers with weekend car editions such as The Star, New Straits Times, The Sun etc. Also, since the television is a good medium to target a wider audience it should be a priority. The TV stations would include TV3, NTV7 etc. Not forgetting outdoor billboards positioned at specific junctions. This could be complemented with a TV and print advertising where it is visible for potential buyers to see.

Pre-Launch: This is crucial to get potential buyers excited about the new and upcoming Prius. Focusing on the pre-launch could potential determine how well the Prius sells. Consequently, an aura of excitement should be built from social media, direct mail, advertising, television adverts etc. This would also create awareness for the product that has a long purchase cycle and a long decision time.

So as to maximize the return on the marketing plan, there needs to be controls in place to monitors the plans progress (Anderson, 2013).

Customer Feedback: To monitor the marketing plan, Toyota needs to monitor customer feedback through polls and surveys. Toyota can reach our buyers indirectly through hosting online polls on the Internet. Consequently, surveys can be done with marketing groups or via individual interviews by phone or in person.

Target Market Sales: The Toyota Prius sales can be measured by the units sold. This is also done through market survey or at the point of sale. For example, if the target market is male ages 40 to 50, then market sales reports would monitor sales made to that group. On the other hand, if sales are down, then further market research would need to identify sales made to that group.

Budgeting: This would include printing expense, travel expenses for trade shows, cost of market research studies and internal personnel costs. These costs would need to be closely monitored to minimize spending and maximize profitability. 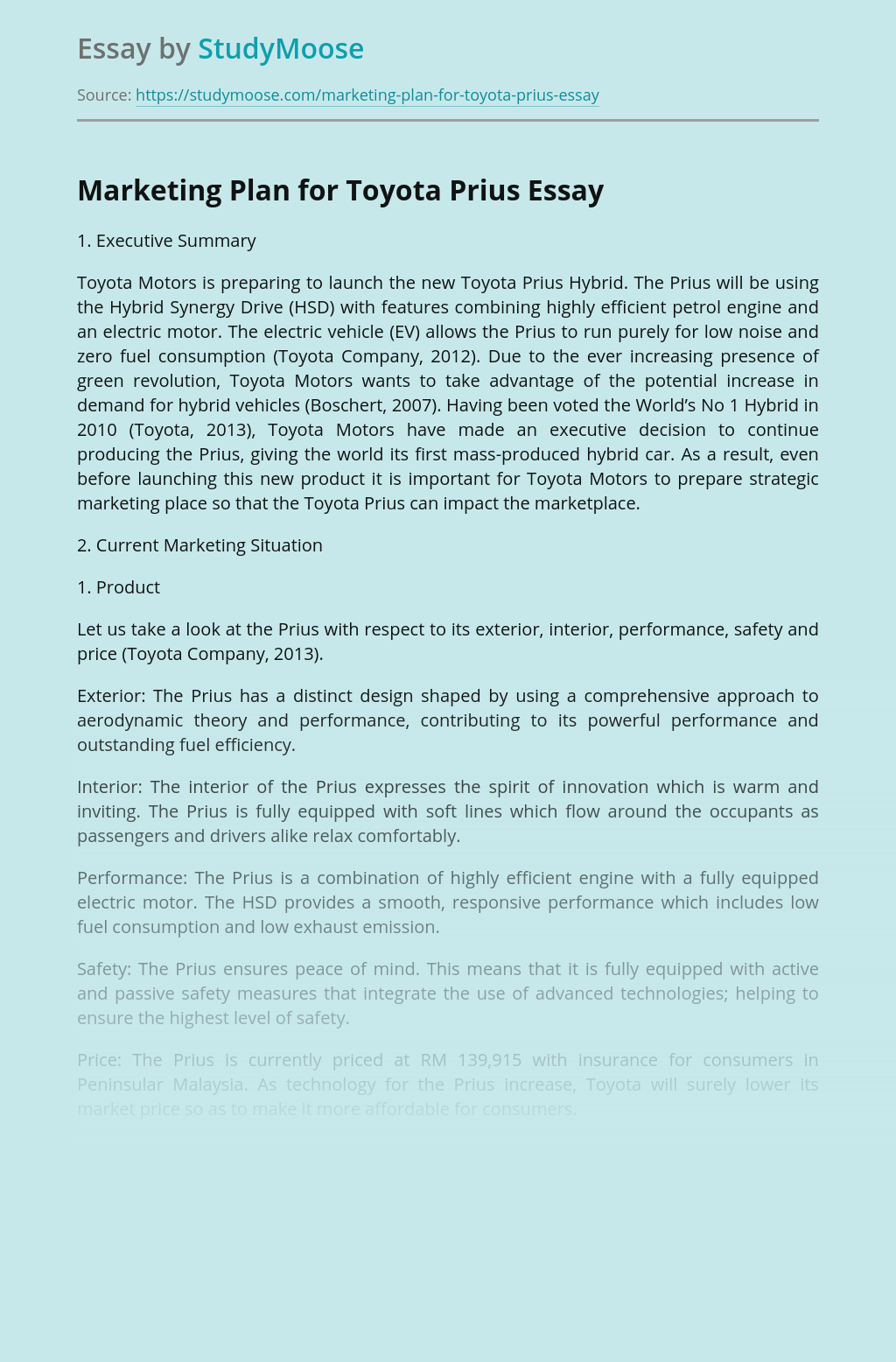