Consider this framework for Toyota Company as the objective of my analysis. Toyota’s competitive strategy is to be reliable manufacturer of different models of quality cars.

Don't use plagiarized sources. Get your custom essay on
“ Supply chain drivers on example of Toyota Company ”
Get custom paper
NEW! smart matching with writer

This strategy dictates that ideal supply chain for Toyota will concentrate in responsiveness but also should be efficient. Its supply chain consists of decentralized, but interlinked units that engage in local experimentation and actively pursue learning and resource transfer across units. Toyota effectively uses four supply chain drivers to show best performance. Later while analyzing each driver you will be able to see it.

One of the key goals of Toyota is to reduce inventory at the line side of the plant and throughout the supply chain. It does it with the help of crossdocking (which support all of Toyota’s plants) in order to increase delivery frequency and reduce inventory.

Toyota reduces in-process inventory through Just in Time set of techniques. The process is driven by a series of signals, or Kanban that tell production processes to make the next part. Kanban are usually simple visual signals such as the presence or absence of a part on a shelf. JIT causes dramatic improvements in a manufacturing organization’s return on investment, quality, and efficiency.

For example involves picking up from one supplier and delivering to the cross dock, such as delivering kits to a plant. Toyota may divide four pallets into 12 to 14 smaller orders in order to minimize inventory at the plant, which can absorb some fluctuation in demand. This means more frequent pick-ups of small lot levels done hour by hour. Toyota’s management initiatives involve increasing delivery frequency, reducing inventory, and accommodating the five-day car (from order to delivery). It is also being more proactive in order to absorb changes or uncertainty on a daily basis. At the same time, reducing costs.

The above listed companies are the major suppliers of inventory for Toyota Company.

Toyota had avoided many of long-distance transportation problems, simply by creating different manufacturing divisions in every major market (for example for North America, France, etc, it builds plants producing cars according local demand, and placing it closely to high-developed infrastructure and suppliers). In Japan, it uses rail and truck modes of transportation. Because of the fact that country is not very big, it does not take much time (and is not too costly) to transfer products between different stages, and at the same time speed of product transportation is relatively high. Outsource transportation for end products by third-parties (dealers) somehow decrease transportation function. Local infrastructure is extremely developed and it is easy to create route along which product can be delivered. Due to these peculiarities, company uses middle balance between efficiency and responsiveness.

Here we discuss the role of Toyota’s facilities play in the supply chain and critical facility-related decisions that Toyota’s managers made.

· A total of 12 Toyota plants are located in and around Toyota City and other areas of Aichi Prefecture. Toyota has established three other domestic manufacturing companies outside of Aichi – in Kyushu, in Hokkaido and in Tohoku. (See exhibit #1).

· In addition, DUO sales outlets, which sell Volkswagen vehicles, have been operating since April 1992.

There are also virtual locations (web-sites), such as www.toyota.co.jp, etc.

Each Toyota facility working towards ISO 14001 certification, or already certified, continues to set measurable environmental targets to be achieved. (ISO 14001 is a process of continual improvement that does not stop at initial certification. The facilities’ targets typically involve setting time goals for prevention of pollution).

The reasons on the choices of facilities` location made by Toyota were mainly the well-established infrastructure along with the quality of auto-parts manufacturers established in the region, the geographic situation, the proximity to other Toyota facilities, and the easy access to most markets for the every new car to be produced at the plant.

For manufacturing facilities company had implemented Toyota Production System (TPS)-the framework and the interaction of these facilities with the suppliers and customers. The main goal of the TPS is to eliminate waste. There are 4 kinds of waste found in the TPS:

Toyota was able to greatly reduce cost and inventory using the TPS, enabling it to become one of the three largest companies in the world. Due to this stellar success of the production philosophy many of these methods have been copied by other manufacturing companies.

Considering Japanese manufacturing facilities Toyota is more efficient than responsive, by using its famous TPS. But you can see that for other facilities company is more responsive and moreover it develops loyalty to current customers, hence extent awareness to potential ones.

For example, the majority of Toyota service centers and stores facilities have a number of features including but not limited to:

Aside from, in Japan these facilities are presented as very effective and spreaded network.

Globally, Toyota makes facilities decisions to be more responsive to their customers. Company has an end goal of opening manufacturing facilities in every major market that it enters. Although there are other benefits to opening local facilities, such as protection from currency fluctuation and trade barriers, the increase in responsiveness plays a large role in Toyota’s decision to locate in their local markets. Web sites, counting as virtual facilities, through which customers can locate the closest dealer, compare prices and models of cars, receive technical advice and support, and even make an order, add value to responsiveness, and at the same time help company to increase facilities` capacity, because of involving more audience and take off overload on its physical location (reduce costs).

Toyota uses the following IT infrastructure:

· Intranet, which can be accessed through worldwide networks, such as Sprint, UUNet, Tymnet, CompuServe.

Toyota is trying to get its products and operations as Internet-enabled as possible. Toyota is one of the first automakers to use the Internet aggressively to connect with its divisions, dealerships and through whole supply chain. Toyota is also the first company to pursue an online replacement-parts aftermarket exchange. Nowadays Toyota has wide-ranging web initiatives. They stretch from providing automobiles with wireless access to live traffic and safety reports to connecting Toyota dealers in a virtually paperless communications network.

Toyota is working closely with i2 Company to launch what the automaker is calling the Monarch Project, which is aimed at improving operations in Toyota’s $1 billion parts-replenishment business. A major part of the initiative will be Dealer Daily, a web-based portal that will connect Toyota’s 1,300 dealers with its factories around the clock, improving parts ordering, sales and vehicle repair operations. For example, dealers will be able to download sales and other company information directly from the Web using a virtual private network and leased lines. This will prevent Toyota from having to send two pounds of paper-based updates to dealers each week, slashing about $3 million in annual printing and distribution costs.

In the long term, Toyota wants to have complete visibility in its supply chain. Suppliers will be able to look at Toyota’s parts inventories and automatically replenish them, instead of waiting for Toyota to make a request (pull information system, data is quickly transmitted through all stages to accurately react on demand).

The new i2 system will also allow dealers to instantly locate the exact car model a customer has ordered – whether it’s in a warehouse, on a truck or in a factory – and deliver it as soon as possible. Though it’s not quite the build-to-order model Dell Computer uses to sell its PCs, Toyota’s approach should greatly reduce the cycle time for customers to get their cars

Toyota relies on visual controls in place of using TMS or WMS for decision support. It uses a Kanban card, which is a visual cue for the need to replenish small lot sizes. But it is developing in-house systems that support enhancing Kanban to Web-based E-Kanban.

Automaker has tide connections between all stages of supply chain with the help of own intranet (EDI, which helps to exchange information with suppliers, staff very effectively); web-sites, which are localized for every specific market (for example www.toyota.com for North America, www.toyota.co.jp for Japan, etc) and allow to customers to be not physically presented at facility, but to reach information, or even choose car model he/she likes; and ERP systems (SAP and i2 software) which allow interaction between all stages and make information visible to everyone who has enough rights to use it. This determines the role of information in company`s supply chain. At that stage Toyota is much more responsive to customer than efficient.

There are several obstacles, which can make difficult to create ideal balance between efficiency and responsiveness for Toyota Company:

Increasing Variety of Products: customers may demand custom-made product (in our case- cars): sport/casual car, different colors, various options (ABC, conditioner, audio/video, signaling), diesel/benzene (or even hybrid: hydrogen-benzene car). All these can increase uncertainty, hence cost for company and low down of responsiveness.

Globalization: difficulties with coordination of business units, competition from GM, Ford, and Honda.

Difficulty Executing New Strategies: current strategy is perfect, but then after influence of different factors company will face with the need of change, it should not only understand, but know how to execute something especially new. 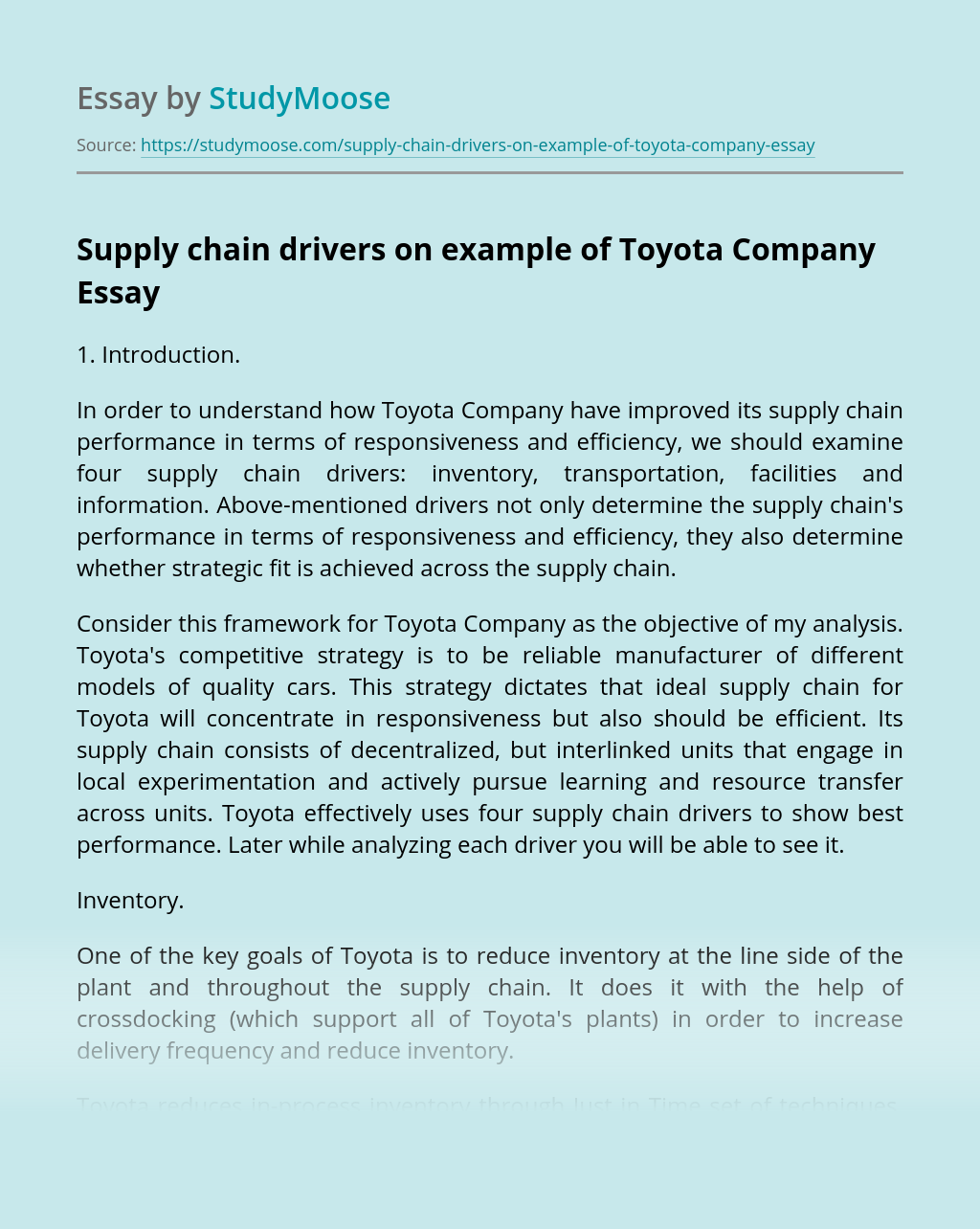