Who Isn't Familiar With Mahatma Gandhi?

Who isn’t familiar with Mahatma Gandhi? Everybody knows him. He is called father of nation. Subhash Chandra Bose first called him Bapu, father of nation.Ganfhi was born on 2nd October, 1869 in Porbandar, Gujrat. His full name was Mohandas Karamchand Gandhi. Karamchand Gandhi was his father, who was Dewan of Rajkot court. His mother was Putli bai, she was a very religious woman. He was very influenced from her mother. From childhood he wanted to be a moral person like Harishchandra, who sacrificed all his kingdom and family for righteousness and Shravan Kumar, who was a great son, who served his blind parents.

Don't use plagiarized sources. Get your custom essay on
“ Who Isn’t Familiar With Mahatma Gandhi? ”
Get custom paper
NEW! smart matching with writer

He got married at the age of 13 with Kasturba. In 1888, he left India to go London for higher studies and become a barrister. He studied law there and came back to India in 1891. In 1993, he went to South Africa for a merchant firm as they needed lawyer. He lived there for 21 years and fought against discrimination on the basis of race and skin colour with Indians.

Here he started a methodology of Satyagraha. He established Tolstoy Ashram there. One of his disciples was Nelson Mandela, who fought for rights and against discrimination with coloured people. His values were Satya, Ahimsa and tolerance. He asked to give up all kind of violence and go with Satyagraha.

Gandhi came back to India in 1915. He joined Indian National Congress. To understand India, he started to travel across India. In 1917, Champaran Satyagraha was the first civil disobedience movement launched by Mahatma Gandhi.

Gandhi sought political co-operation with Muslims, so he started Khilafat Movement. With his book Hind Swaraj, Gandhi declared that British rule was established in India with the co-operation of Indians and had survived only because of this co-operation. If Indians refused to co-operate, British rule would collapse and swaraj would come. Hence he started non co- opration movement without any violence. He also started swadeshi movement and boycott foreign made goods. He did Dandi March, to break law of making salt imposed by britishers. He went to round table conferences. Here he had some disagreement with B R Ambedkar, another leader of untouchables and a prominent scholar. Coming back from second round table conference, he started another satyagraha in Yerwada jail in Pune. He demanded to take back the law which provided untouchables a separate electorate. He went on fast unto death. Ambedkar had to bow against his persistence. They both signed a pact called Poona Pact. He started quit India movement and gave slogan ‘Do or Die’. He was arrested and put in Aga Khan Palace for two years. Muslim league was asking for separate autonomous regions for minorities or partition of country. Gandhi was against any such partiton along religious lines. Both, Congress and Muslim League didn’t listened him which led to partition of india after independence. This led to broke out communal riots in whole country between Hindus- Muslims. Gandhi visited to riots affected areas and urged to stop all this massacre and to be tolerant with each other. But all this didn’t go long enough. On 30th January, 1948 when Gandhi was going for his prayers, a Hindu fanatic, Nathuram Godse, killed Gandhi. Whole world was remembering his significance and role towards peace. A leader, thinker of his times, who went jail for several times, a total time of some 6 years of his life. What a irony it was, the great priest of non-violence had been the victim of violence.

Who Isn't Familiar With Mahatma Gandhi?. (2019, Nov 21). Retrieved from https://studymoose.com/mahatma-gandhiwho-isn-t-familiar-with-mahatma-gandhi-everybody-example-essay 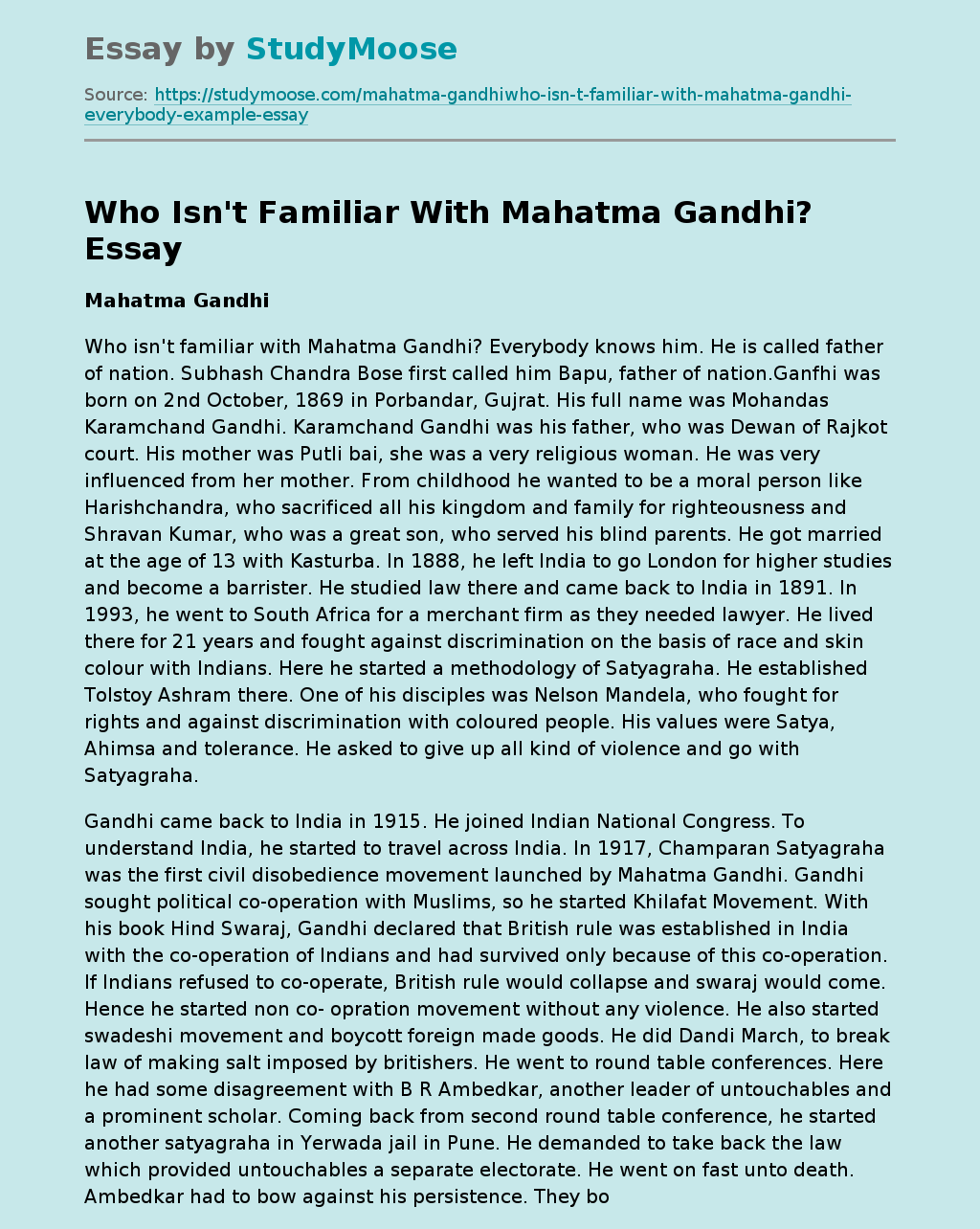