Mahatma Gandhi was one of the most important person and charismatic leader in the history of India as he was he only one who is considered as the founder of our nation.

Don't use plagiarized sources. Get your custom essay on
“ Charismatic leadership style of mahatma gandhi ”
Get custom paper
NEW! smart matching with writer

He was the self made leader, he was not having any career in his life, no fame was gained by him, he was also not so rich an average looking man but still he was the father of the country. Mahatma Gandhi gave right ways and positive thoughts to many people in the nation, he make them teach what he actually practice in his real life, he was called as the great symbol of truth by the public of our nation. It was due to rule of British in India which made him to fight against them and for this he needed to guide the Indian citizens to fight against them this made him to become the absolute leader and to use evil practices against the British. It was the period during which he was in South Africa working on some legal work their which he was subjected to abuse , but then he realizes how the Indians in their home land were badly treated and beaten by the British which was subjected to cruel abuse.

To fight against the British people Gandhi took many ways which he called as practices in all over India which were non violence, truth and bravery. This whole practices were named by Indians as Satyagraha and which was having a big meaning among the Indians.

The practice of Satyagraha was done all over Indian was used against corruption, non- violence, civil defense. Mahatma Gandhi thought that doing such practices will only help them to have proper control over social and political rulings. It was because of his charisma that he many Indian were devoted towards Mahatma Gandhi and due to which they were following practice of Satyagraha without any fear. Through the practice of Satyagraha Gandhi Ji followed the fight for independence from British which was considered as a big fight in whole world during that period of time. During his fight for independence Gandhi Ji advice his Indian to use the non- violence fight against the British which generally consists boycotting the practices of British and not accepting the use of British products in India. It was his intelligence, leadership qualities and charm nature which helped many Indians to fight against the British by the use non- violence practice. Since Mahatma Gandhi was very devoted towards his home land and towards its country people that he was ready to die for them anytime that is why he was the main point of attraction among the hearts of Indian people and that’s why people of India were also ready to die for Gandhi Ji anytime anywhere.

President of South Africa stated bout Gandhi Ji “You produce a Lawyer and we produce a Leader out of you”. This first evident that makes him great leader was in South Africa when was thrown out of first class compartment on the basis that he was an Indian and Indians were treated as lower class people in South Africa and this is just because of color of Indian people. This intolerant behavior towards Indians opened his eyes and showed how his country people are treated. This thinking intended him to fight against racism for equal rights of Indian people. This further led him to a great fighter in India and he was also a great leader in the hearts of Indian people. According to Bass (1985) transformational leaders generally consists of distinctive attractive behavior that includes sacrificing personal gains for the advantage of the group setting common example for followers and demonstrating high model standards. Leadership style of Gandhi Ji clearly shows the presence of transformational leadership. As an example his followers were intended by him, have trust in him, love him, were loyal to him and revert him. Transformational leaders also charm to higher values like equality, freedom, right decision and peace. Gandhi Ji was mainly known for these leadership styles and fought for his entire life following these values and taken stand for these values. Gandhi ji leadership styles throughout his life encouraged his followers to follow this practice of non-violence fight and also to fight in unity. During their fight for freedom thousands of his followers were sent to jail and were also beaten badly and treated brutally. Example: Many of his followers were gathered for the Salt March which was followed by a non- violence practice but then also British officers beat them badly with sticks. Then also they did not follow the path of violence because they had a great respect of Gandhi Ji and his practices of non- violence, equality and unity. 1. According to Ferrin and Dirks transformational leadership is strongly associated with trust in the leader. According to Bass, transformational leaders consists the following behaviors:

This nature arouses active and powerful follower emotions and identification with the leader. Gandhi was successful in motivating and influencing lots of people as a result he was the person of his words, and continuously practices what he preached. He was a task model for lots of common people and won their respect and trust through his practice. He expressed hg model conducts, non-violence, cooperation (voluntary imporvinshment), commitment and endurance so as to achieve India’s independence.

This behavior will increase follower awareness of issues and forces followers to look at issues from a new view point. Gandhi Ji was perpetually supportive of his believers and inspired them to think broadly as well as frankly, raise queries and solve issues. He was willing to simply accept wrong doing and mistakes and wasn’t ashamed to discard a method that didn’t worked as plan. For example: Gandhi Ji asked for the shut off his non- violence campaign just because sum of his subordinates were using violence methods to fight against British in that case instead of going against them he asked for the closure of the campaign.

This includes giving support, training and inspiration to followers. Gandhi Ji was very supportive to his followers as an example he with patience listen to the problems and considerations of the poor with regard to their ability to keep our support because of British policies. Gandhi Ji was also
very supportive of different leaders like national leader and Vallabhbhai Patel. He nurtures them inspired them to share concepts and even authorized them to create choices, never creating them feel addicted to him.

This type of leadership includes human action and appealing vision and making use of symbols to focus subordinates effort. Gandhi Ji stood by his personal values and systematically delivered his vision of independence by openly exchanging his vision and using symbols like the Salt Satyagraha Movement, he guided his believers with the way right meaning that successfully impressed them to stay idealistic and increase their effort.

Referent power is also called as:

When a leader is respect, admired and influentially followed by others. As we have already discussed in transformational leadership Gandhi Ji was respected by his followers and having a two way relationship between him and his followers. An important leader is given respect only when two way communications is followed and Gandhi Ji believed in this way of communication that’s why he was a great leader. Gandhi ji constantly proved to be a role model and is behavior consistent with the moral principles he predicate.

Qualities of Mahatma Gandhi as a Referent Leader

Honest and considerate to others
Unselfish intentions
Role model
Used the process of internalization to influence his followers Many of the followers of Gandhi Ji were influenced by stimulating their values of self respect, justice and freedom to fight against British. At certain points personal identification was also considered. For example Jawaharlal Nehru was initially influenced by Gandhi Ji as he used to western wear clothes and looking at the style and dressing sense of Gandhi Ji he also started wearing Khadi clothes. Similarly many followers of Gandhi ji boycotted the western style wearing and opted for khadi dressing like Gandhi Ji. According to (2010) power is the capacity to attract the nature and attitude of people in the direction desired. With an exclusive charming and attractive practices followed by Gandhi Ji empowered him with high referent power. He was able to maintain his power by expressing care towards the needs of the public by showing trust and treating people equally. Due to his high level of personal sincerity and persistent values allowed him to maintain his referent power.

Since Gandhi Ji was a good lawyers as he has completed hi law from South Africa and was aware of all the rules and regulations of the government. Due to his expert knowledge also the member of Indian national congress and later join the British Indian community in the Transvaal where he fought against restriction on Indian trade he always follows the rules and regulations in correct direction and his entire practices were legal there were no illegal practices followed by him. Due to his non-violence and expert power his followers were also influenced by his practices and used to follow his path.

3. Job Involvement
Gandhi Ji always encouraged for ethical practices during his lifetime which are:

Truth and love
Self Discipline
Abolition of untouchability
Dependency(Weaving his own clothes)
Gandhi Ji always had a high influence on people because of the above mentioned characteristics of his leadership. Gandhi Ji mainly shows interest for others rather than focusing on self interest also called altruistic behavior. In order to influence his followers in the direction of non- violence he did fast for several days. During that period he not even thought about his health and food, he suffered a lot till he gets the desired result of his fast. Gandhi Ji become as a leader of masses from the leader of community when Gandhi ji was in South Africa he fought in suit and tie but when he came to India he adopted the situation realizing in India and wore clothes of a peasant, weaved his own clothes and lived in a small house. He was always under control of situations and having effective negotiation skills while dealing with British authorities.

Gandhi shows the transformation of a standard man into a legendary leader. It shows how conditions will inspire someone to fight against injustice and difference. Gandhi’s style of leadership proves that to attain a required and decent end, suggests that must be equally sensible. Gandhi had a vision that was accepted by his followers. His personal practices led to India to be free from Britishers. His involvement and interest towards the poor people of society is memorable and peerless. His teaching of non violence is extremely abundant relevant even in today’s world. For the contribution and sacrifices he created for the India’s independence, upliftment of poor people, contribution towards woman encouragement and unity among completely different religions, he has been given the title of ‘Mahatma’ by his nation and is named as ‘Bapu’ that’s Father of the nation. 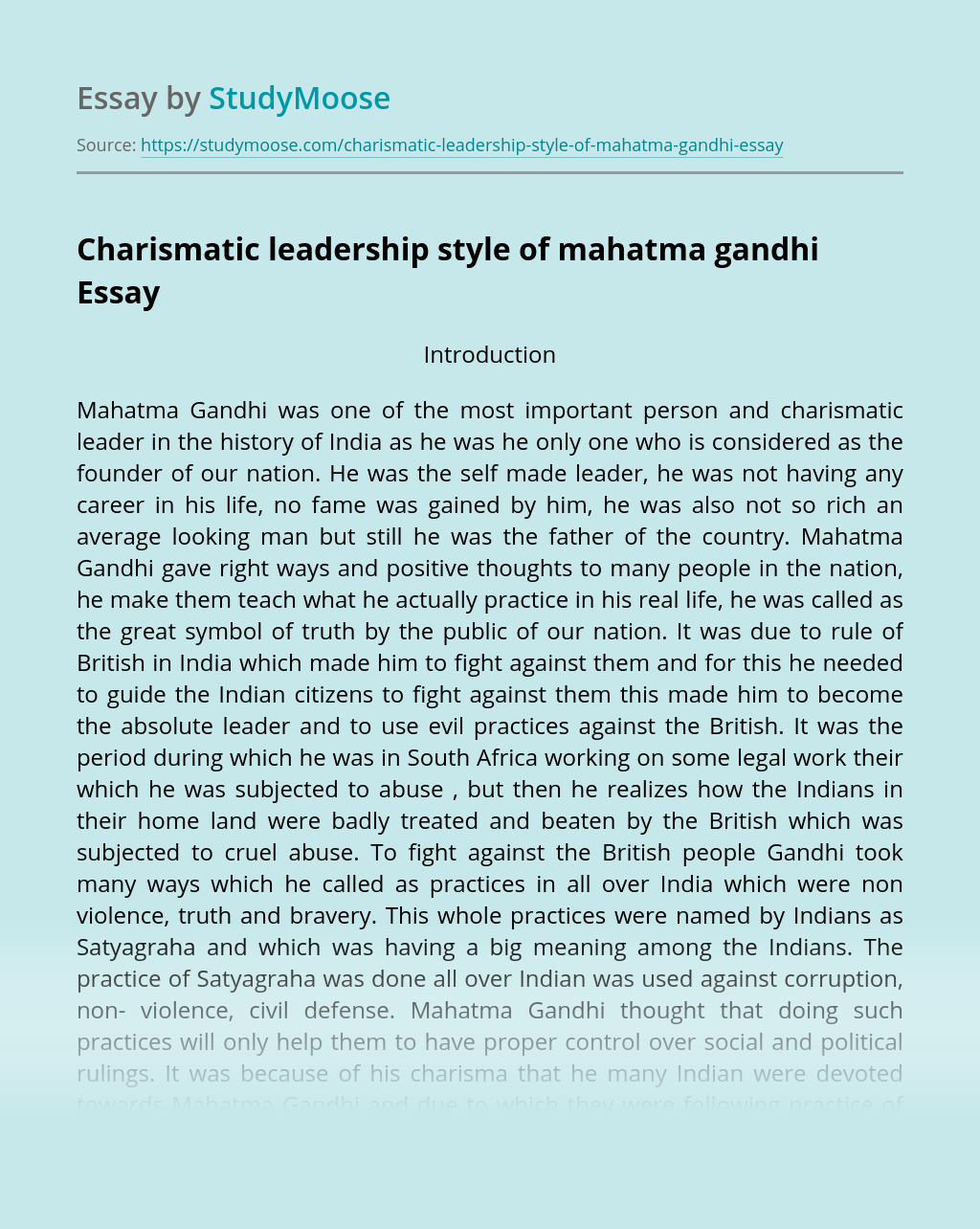