The tragedy of Macbeth, by William Shakespeare is considered a tragedy due to the downfall of the main character. His downfall causes many deaths throughout the play and causes dramatic events to take place which in the end leads to his death. Many major events take place in this characters life to lead up to his downfall and death. The downfall of Macbeth is due to his greed for power, witches’ self-fulfilling prophesies, and the pressure from Lady Macbeth.

The greed for power is a major role in the downfall of Macbeth.

Macbeth started out a brave warrior that would have given his life up for the king. The king honored that by making him Thane of Caldor which started him on this downfall to greed of power. This greed for power caused him to want more and more control, which eventually led to do anything even murder in order to rise to the highest position. Even after he became king it wasn’t enough, he had to make sure he held that position by killing everyone who posed a threat to his reign.

Over time people start to see these terrible things that were going on, which caused the death of Lady Macbeth because the burden of this knowledge was too much for her to bare. In the end Macbeth’s people turned against him ending in the death of Macbeth.

The witches played a major role in the plot and thinking of Macbeth. The witches and there self-fulfilling prophesies played with the mind of Macbeth planting the thought in his head that would lead to his downfall.

By planting these prophecies in his head the witches tormented him by making him think that it was fate that he be king and rule over everyone, when in reality they just implanted the thought into his head. “All hail, Macbeth! hail to thee, thane of Glamis! All hail, Macbeth, hail to thee, thane of Cawdor! All hail, Macbeth, thou shalt be king hereafter” (1.3.50-53). This quote shows us one of the ways the witches play with Macbeths mind by implanting the thought into his head. This causes him to take the actions needed in order to become king. Through there crafty speech is how they helped lead Macbeth to his death.

“My nemesis – my downfall, if you will – was relationships, and trying to fulfill them.” (Jennifer O’Neill). This quote shows us that Macbeth’s relationship with lady Macbeth was part of his downfall because of his want to fulfill what she wanted. His want to fulfill her desires of him drove him to kill King Duncan. “We fail? but screw your courage to the sticking-place, and we’ll not fail.” (1.7.59-61). This quote shows us that Lady Macbeth not only encouraged him to kill King Duncan but she is actually the reason Macbeth goes through with the murder. “make thick my blood; Stop up the access and passage to remorse” (1.5.43-44).

This quote shows that Lady Macbeth asks the spirits to harden her heart so she does not feel remorse for what she is going to do. Lady Macbeth also convinces Macbeth to try and calm his conscious from what he has done by saying “My hands are of your colour; but I shame To wear a heart so white.” (2.2.61-62). Showing that she was a part of the murder but she feels no remorse for it.

In conclusion the tragic fall of Macbeth is due to many factors. This is considered a tragic play because throughout Macbeth’s downfall many people are killed in order for him to become king which ultimately leads to his death. That’s why Lady Macbeth, the witches, and his greed for power all led to the downfall. Another reason he fell is because of his ambition that burned inside of him to be great. Those are the main factors for his fall. 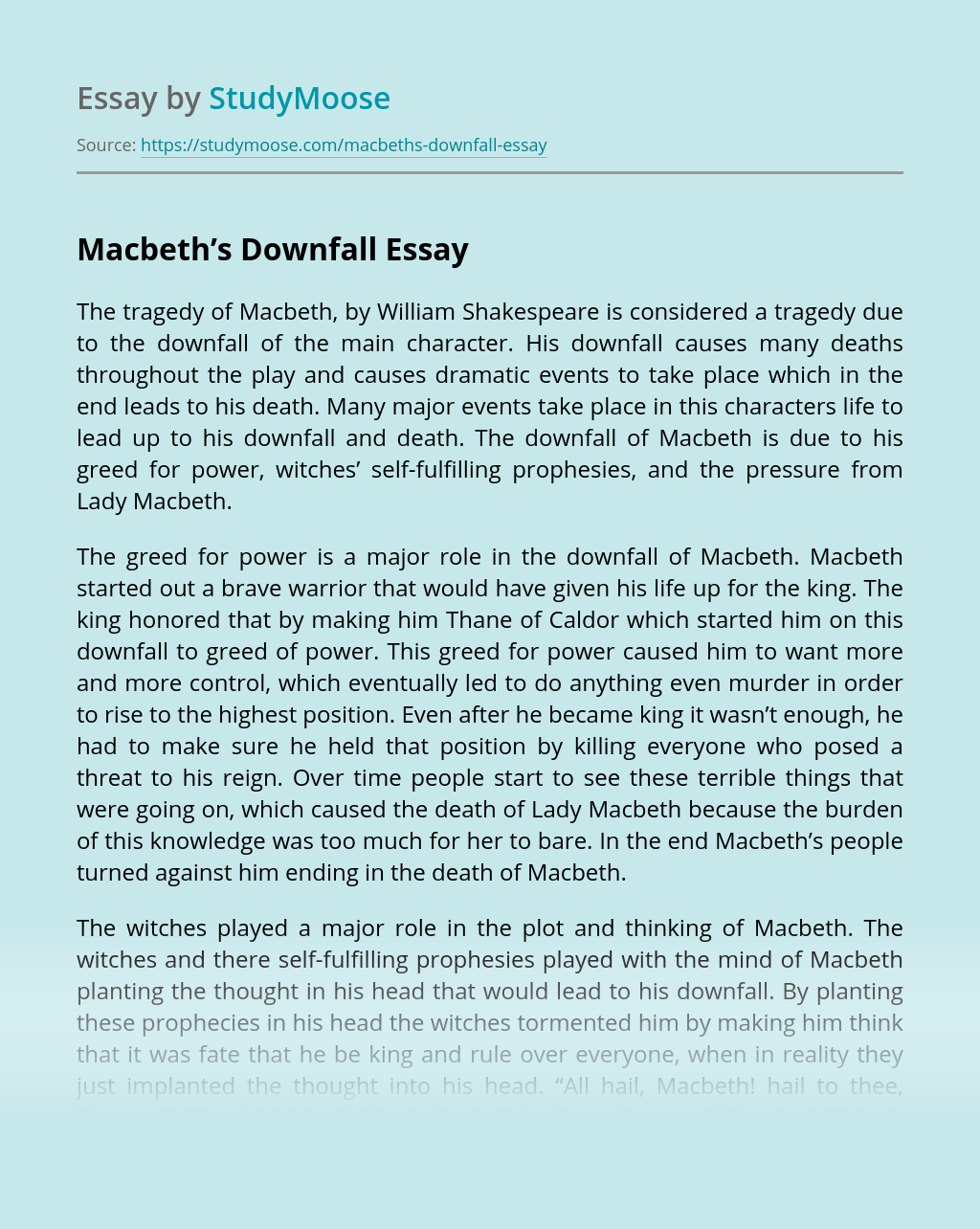