In this soliloquy from Act 1, Scene 7 of William Shakespeare’s tragedy Macbeth, Macbeth is debating alone whether he should follow his “intent” (11) and murder the newfound King Duncan by weighing up the potential consequences and his underlying motives. Having just taken Duncan under his hospitality,

Macbeth feels burdened by his conscience which is deterring with what his wife wants him to do. Utilizing forceful alliteration, hyperbolic language, and various instances of alliteration, Shakespeare cleverly conveys Macbeth’s anguished and indecisive tone as he contemplates the substantial issue, the last time his moral compass and sense of reason are apparent.

Don't use plagiarized sources. Get your custom essay on
“ Macbeth’s Motivation To Kill King Duncan ”
Get custom paper
NEW! smart matching with writer

At the beginning of the passage, Macbeth starts out by listing all of Duncan’s noble attributes; Macbeth has already perceived that Duncan is a “meek” leader (1) and “so clear in his great office,” or free of corruption (2). By highlighting all of these virtues that the good-hearted king is displaying, Macbeth reveals to himself just how unreasonable his assassination would be. Logically, Macbeth concludes that Duncan’s “trumpet-tongued” legacy will outlive the “deep damnation” of his death (3-4).

The two cases of alliteration emphasize the distress Macbeth emotionally experiences about Duncan. The religious imagery of angels playing trumpets for Duncan is as if to say only the king would have God’s approval, and he already comprehends that the “deep damnation” will lead to more sinful behavior. Macbeth also describes the effect he believes such an outrageous murder will have on the people: “pity, like a naked new-born babe/ shall blow the horrid deed in every eye” (5, 8).

Connecting pity to a newborn infant, the simile dramatizes the innocence of the people to the heinous crime. Not only will they grieve for Duncan, but their grief will be so strong that “tears shall drown out the wind” (9). The idea of the wind being drowned out rather than drowning out something else is hyperbolic and does well to illustrate the overwrought emotion Macbeth feels even before doing the deed. Another model of religious imagery highlights the gravity of the subject on Macbeth. The newborn mentioned before is described as “striding the blast, or heaven’s cherubim” while they are “horsed upon the sightless couriers of the air” (6-7).

This imagery draws reference from the biblical Doomsday, where cherubim who are traditionally portrayed as naked infants are seen flying around blowing trumpets as judgment is passed on. Macbeth’s discourse here stems from being raised by these traditional teachings and undoubtedly he feel pressured to not end up on the wrong side of the judgment. Near the end of his soliloquy, Macbeth admits he does not have any real motivation: “I have no spur to prick the sides of my intent, but only vaulting ambition” (9-11). After deeply scouring for his incentive for seeing the King Duncan deposed, he identifies ambition which suddenly seems less sufficient a justification for committing a crime of this magnitude. At this point, it seems like Macbeth’s mind is resolute in preserving his loyalty to the king. 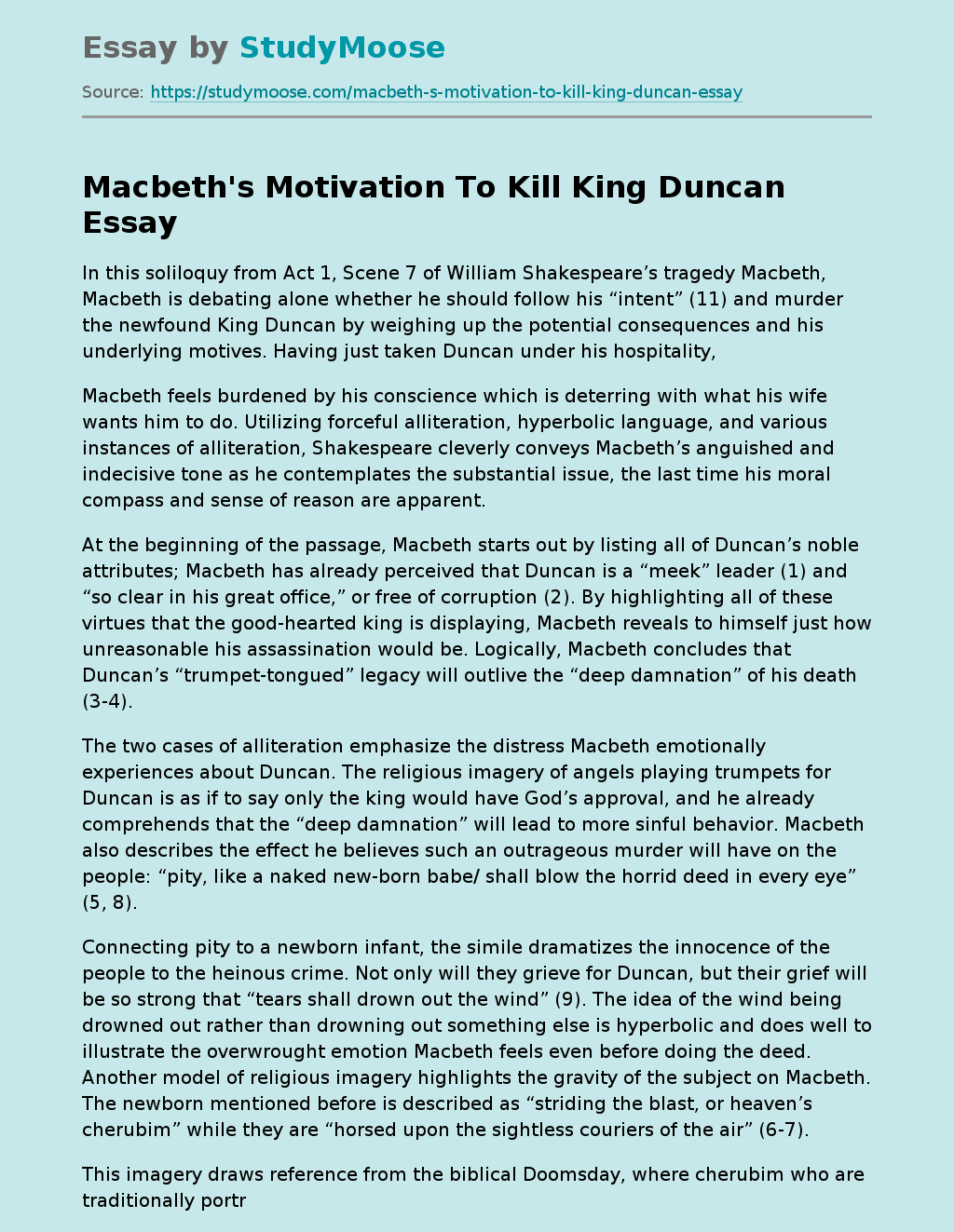