Representations of ambition within Macbeth

Within Macbeth, there are numerous representations of human values and conflicts, including duty vs. desire, the effects of a guilty conscience on the human journey and the differences between genders, and the superiority of men within the play, and the modern era. The value foregrounded throughout this text is the representations of ambition within the play Macbeth, and we will be focusing on the protagonist of the story, ironically named Macbeth.

The effect of ambition can be a double-edged sword.

Don't use plagiarized sources. Get your custom essay on
“ Macbeth Ambition ”
Get custom paper
NEW! smart matching with writer

Ambition can provide a person with desire, so that they can accomplish goals, and give them a kick-start towards them. On the other hand, however, ambition can transition into what’s known as vaulting ambition, which can be defined as pursuing your ambitions without taking into consideration the consequences that comes with it, and hypothetically ‘vaulting’ over the boundaries set. The protagonist within the play, Macbeth, exemplifies the act of ‘vaulting ambition’, and it is mentioned once within the play.

‘The Prince of Cumberland! That is a step on which I must fall down, or else o’erleap, for in my way it lies. Stars, hide your fires, let not light see my black and deep desires. The eye wink at the hand; yet let that be which the eye fears, when it is done, to see.’

Macbeth’s inner desires are reignited after the battle, when he arranges to meet with the three witches on the heath. The witches proclaim and prophesize that Macbeth will not only hold his position as Thane of Glamis, but also be crowned Thane of Cawdor, and eventually, the King of Scotland, though they do not say how.

If Macbeth decides to seek his ambitions, that have now been reminded to him by the witches’ foresights, it would mean that he would have to eradicate the King of Scotland, through the act of regicide. This is what Macbeth was discoursing through his significant soliloquy; that the obstacles he must destroy must not be seen by the eye.

He does indeed know that this act is ‘black’, meaning the act is malicious, and outright wrong, though it must be done if his accomplishments are to be met.

Once he murders the King Duncan, he knows that he must prolong his undeserved spot as King, as the repercussions will be that of the actions that he have committed. This is due to the Chain of Being, which he has distinctly broken. Once this hypothetical chain is broken, which by the way, represents the natural order, the universe will be plundered into chaos, and ‘righting the wrong’ will retain the natural order. Throughout the ending of the play, when Duncan’s sons plot to overthrow Macbeth, he accepts his fate, and the apparitions stated by the three witches during their second meeting with Macbeth come to fruition. He knows of his imminent downfall, and within his final moments of life, he accepts defeat.

‘I will not yield to kiss the ground before young Malcolm’s feet, and to be baited with the rabble’s curse. Though Birnam Wood be come to Dunsinane, and thou opposed, being of no woman born, yet I will try the last. Before my body I throw my warlike shield. Lay on, Macduff; and damned be him that first cries, ‘Hold, enough!’

This scene marks the promised demise of Macbeth, and good once again conquering evil. His ambitions overall lead to his demise, and if he had either followed his orders from the King, who is a higher being on the ‘Chain of Being’, or gained the royal, majestic position through an accepted process, then his death would not have been sentenced and sealed.

Macbeth’s reactions to the prophecies given to him can be compared to the composure at which Banquo reacted to the prophecies handed to him. The three witches stated that Banquo’s future male lineage will be Kings, and left it at that. Banquo never went that step further, he decided that that would be good enough, and in the end, it was the more noble decision, and his death was through an act of atrocity by Macbeth, who saw Banquo as a threat who had to be eliminated. His death was not in vein, as it allowed good to overpower evil once again.

It is through his ambitions, and the persuasion of his wife, Lady Macbeth, whose intention was to propel her husband to a more powerful position. Adding to that, the premonitions of the three sisters, meant that Macbeth seemingly had no choice but to chase his burning desires. He was so overcome with thoughts and feelings that lead to him being of a higher class, that it seemed so easy, and it was something that had to be done. It can be concluded that Macbeth’s collapse was due to the poor decisions made, and his overall pursuing of his ambitions to make it to the top, 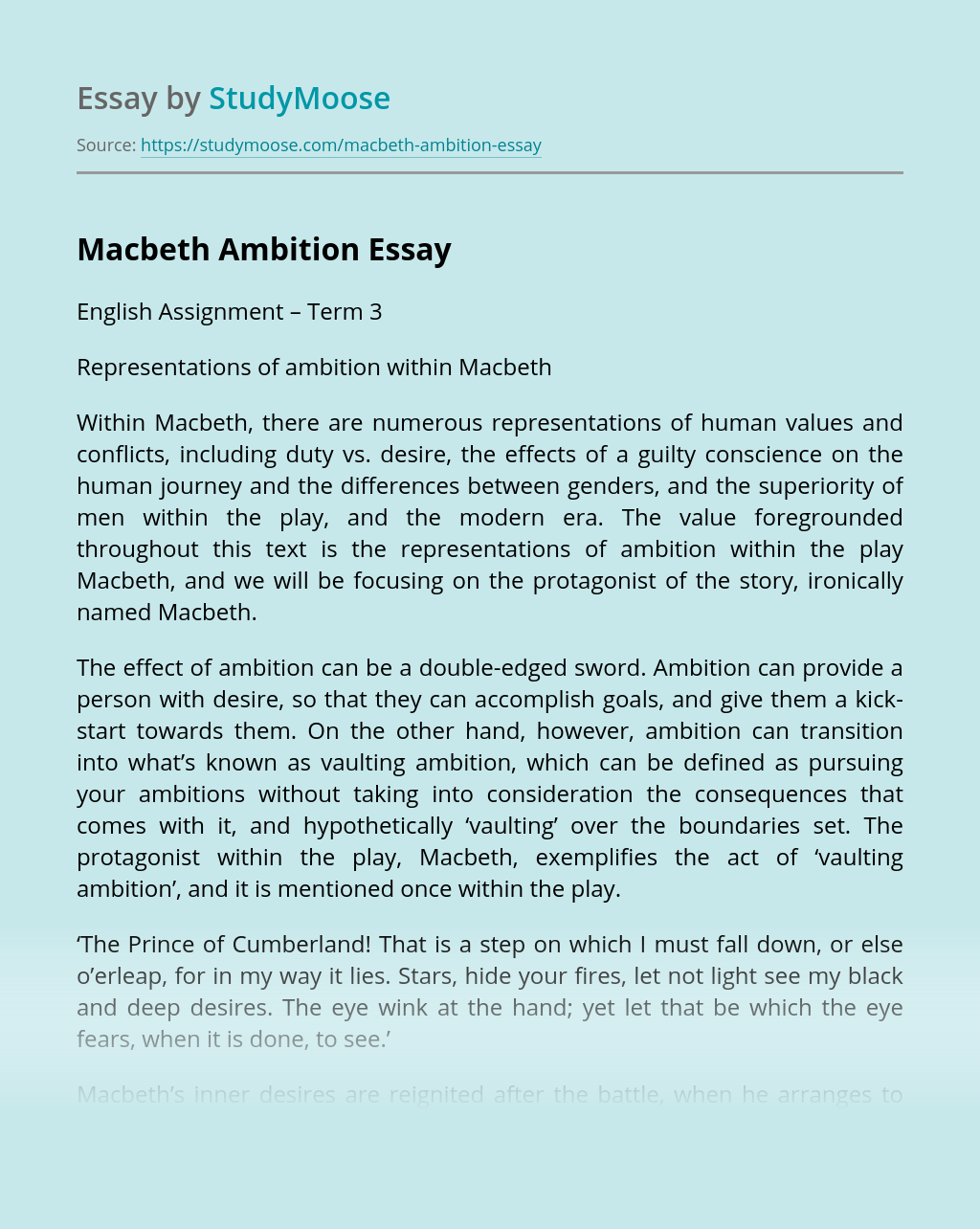