Macbeth - a Study of the Criminal Mind

Shakespeare delves straight into the theme of murder and the study of the criminal mind. The trio of witches subtly expose themselves to be concocting a devious plan in the first scene itself. “When the hurly-burly’s done. When the battle’s lost and won. That will be ere the set of sun. Where the place? Upon the heath. There to meet with Macbeth”. (I. i. 3-7) As the play progresses, Shakespeare reveals the underlying causes for the murders but stalls the unsettling outcomes, the effect of being a criminal.

Each of the main characters in ‘Macbeth’ contribution to the central theme grows throughout the play.

The Three Witches and Lady Macbeth’s manipulation of Macbeth and the growing insanity of the couple is an example of such cause and effect and can be related to real life. The Three Witches or the ‘weird sisters’, skulk like sinister thoughts and unconscious temptations to evil. Their cunning stems from their paranormal powers however, their true ability lies in exploiting the weaknesses of their interlocutors.

Despite their absurdity through comical yet malevolent rhyme, are clearly the most dangerous characters in the play, being powerful and wicked.

However, the audience is left to question the witches’ allegiance. They could be autonomous, toying with the human emotions, or agents of destiny who prophesize the inevitable. The Weird Sisters seem to have an intentional resemblance to characters in Greek mythology known as the Fates. They too were three sisters who controlled the metaphorical thread of life of every mortal from life to death.

The Weird Sisters control the thread of life of all the major characters in the play, and it is in their power to do what they want to them. The prophecies foretold by the witches are seemingly self-fulfilling.

Macbeth may not have murdered King Duncan if he was not pushed to do so by the witches, the night he and Banquo met the witches on the moor and had their futures told. “The thane of Cawdor lives. A prosperous gentleman; and to be king stands not within the prospect of belief. No more than to be Cawdor. Say from whence you owe this strange intelligence? Or why upon this blasted heath you stop our way with such prophetic greeting? Speak, I charge you. ” (I. iii. 72-78) Shakespeare offers no easy answers in the play. He keeps these witches outside the limits of human comprehension.

They embody an unreasoning, instinctive evil; that of a criminal mind. Lady Macbeth is already plotting the murder of King Duncan as we first catch sight of her in the play. Even from this, it can be seen that she is more cunning, more ruthless and more ambitious than her husband. Lady Macbeth wishes that she were a man, and could carry out the deed herself but she is aware that is not possible. Thus, she must push Macbeth into committing the crime for her. The link between gender and power is a key feature to Lady Macbeth’s character as Macbeth suggests that she is quite masculine and is limited because she had inhabited a female body.

This creates a relationship between masculinity and ambition and violence (in some cases murder). Lady Macbeth and the witches are used by Shakespeare to emasculate Macbeth’s idea: “For thy undaunted mettle should compose nothing but males” (I. vii. 73-74). These shrewd women apply ‘female’ methods to achieve power and control. Manipulation of their husbands will thus further their desires. Shakespeare implies that men do not have to be the only ones who are cruel and power seeking but women also. Due to social limitations however, they are unable to pursue their ambitions.

Macbeth feels the need to commit the murder to prove himself to his wife as she is able to manipulate him with noteworthy effectiveness. Lady Macbeth questions his manhood continually as inside, Macbeth is quite frail. He hesitates at first, but gives in as she overrides his protestations. Lady Macbeth stays stable as King Duncan is murder, and it is she who steadies her husband after the crime has been perpetrated. Shortly afterward, she begins to spiral down into insanity – just as aspiration affected her more strongly than Macbeth before the murder, does culpability plague her more strongly afterward.

Toward the end of the play, she is sleepwalking through the castle, trying to wash away the guilt that stains her. Her sensitivity to the act becomes her one weakness. Lady Macbeth then kills herself, showing her inability to deal with their crimes. The initial impression of Macbeth is a brave, strong and capable man, as we first heard of him in the wounded captain’s account. This notion is becomes problematic once he encounters the three witches. It can be seen that Macbeth’s physical courage is joined by a tendency to self doubt – the prophecy that foretold him to be king brings him joy but also creates inner turmoil.

He is manipulated into committing murders that he doesn’t truly want to do. Macbeth however, hides his feelings as he says “I am settled, and bend up each corporal agent to this terrible feat. Away, and mock the time with fairest show: False face must hide what the false heart doth know. ” (I. vii. 79 – 82) He fluctuates between fits of fevered action, in which he plots a series of murders to secure his throne, and moments of terrible guilt (as when Banquo’s ghost appears) and absolute pessimism (after his wife’s death, when he seems to succumb to despair).

Shakespeare uses Macbeth to show the terrible effects that ambition and guilt can have on a human who lacks strength in character. Often, examples in real life start off with an innocent person who is mentally incapable of handling such a thing, and is influenced by something in their lives. With this in mind, Shakespeare’s Macbeth truly is a study of the criminal mind. It can be seen through the inner workings of the Three Witches, the manipulation by Lady Macbeth and the growing insanity of both Macbeth and his wife, as they are not able to cope with the guilt of committing a series of crimes.

Macbeth – a Study of the Criminal Mind. (2016, Sep 28). Retrieved from https://studymoose.com/macbeth-a-study-of-the-criminal-mind-essay 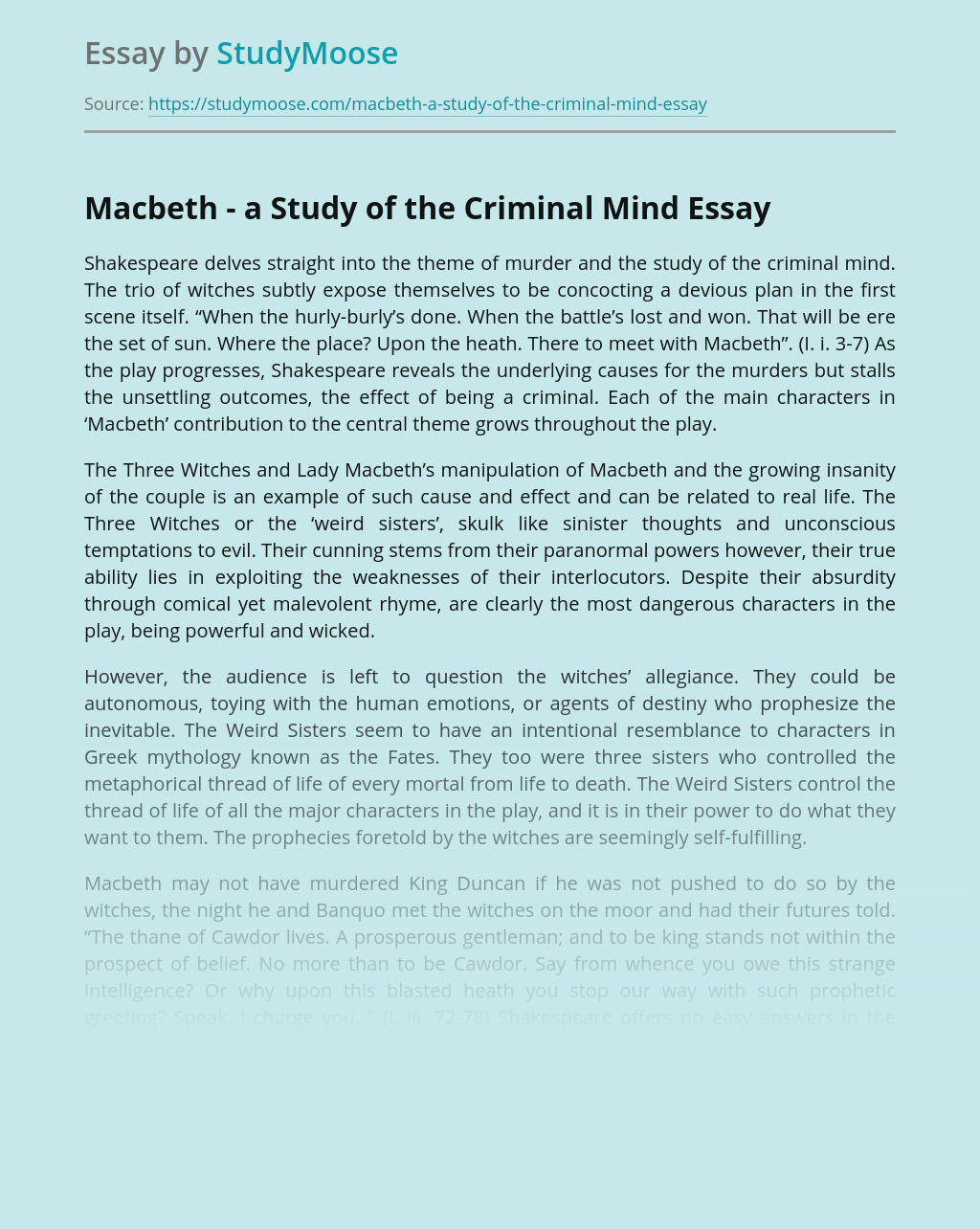 Both texts, William Shakespeare’s Macbeth and Shakespeare retold: Macbeth directed by Mark Brozel contains parallel themes and subtle differences in concerning matters like purpose, context and language. Both texts thoroughly explore Macbeths unlawful rise to power and his inevitable downfall. With power he becomes corrupt, a bloodthirsty tyrant and a victim of his own success...

Ambition is a strong desire to do or achieve a goal. The extent of such ambition is easily influenced by other inner factors, such as gullibility because it allows the mind to believe in things that will bring them closer to their ambitious goals. In William Shakespeare’s play, The Tragedy of Macbeth, the protagonist Macbeth,...

In William Shakespeare’s story Macbeth, the hero, faces a conflict that impacts how the play will go and delivers a message within the story. The conflict starts with the prophecies of the Weird Sisters and later on gets worse from the trickery of Lady Macbeth. The result concludes a series of repeating thoughts running through...

Who Is Ultimately Responsible for the Tragedy of Macbeth

Macbeth was always a loyal man to his King, but when he knew he had the chance to get the kingdom he always wanted, he knew that he had to do everything he could to get it. In this play, Macbeth shows how he was weak, and let people control his actions. His actions and...

As the scenes of ‘Macbeth’, is slowly scene by scene revealed to the audience; Shakespeare wittily shows Macbeth’s personality as two different characters, the victim,to Lady Macbeth and the witches and as the villain, througout the play; but with both characters clearley portrayed so that one from the audience may say Macbeth is a victim...

The relationship between Macbeth and Lady Macbeth: change and deterioration

So there we were. Lounging around this long, medieval-looking, table. Macbeth, “fantasizing”. Woman Macbeth, endeavoring to disguise her relationship with this entire thing. Me, holding it together, yet about biting the dust with expectation. Tasting wine from my cup, I quickly think about the current circumstance. Macbeth isn’t generally fantasizing. The phantom he is seeing...