To be regarded as a great king involves many important factors such as being honorable, gracious, and fair. It is far more difficult to regard a king as being great than as being a failure. In Macbeth there are examples of great kings as well as failures as kings. Duncan is a fair and gracious king who is kind to all of his subjects, and Malcolm has the potential to be a great king through the way in which he fights to overthrow Macbeth.

Don't use plagiarized sources. Get your custom essay on
“ Macbeth: A Failure As King? ”
Get custom paper
NEW! smart matching with writer

Macbeth, however, through his lack of noble qualities is another story. Through arrogance, actions, and cowardice versus bravery Macbeth emerges as the only true failure as a king.

Arrogance surfaces in Macbeth because the protagonist believes that he knows better about everything than anyone else. For example, Macbeth is arrogant to his own thoughts and feelings. He easily lets Lady Macbeth manipulate him into killing Duncan by questioning his manhood. Again, Macbeth is just as arrogant when he quickly dismisses Macduff as a threat because an apparition tells him that “none of a woman born shall harm Macbeth” (IV.

i 86-87). Only after a short while does Macbeth decide to kill Macduff, and only as a precaution in case Macduff was actually not born of a woman, which Macbeth does not know, and does not even plan on finding out.

Finally, Macbeth is very arrogant when an apparition tells him that he will be overthrown when Birnam wood comes to him: That will never be: Who can impress the forest, bid the tree Unfix his earth ” bound root? Sweet bodements! Good! Rebellious dead, rise near till the wood Of Birnam rise, and our high plac’d Macbeth Shall live the lease of nature, pay his breath To time and mortal custom (IV.

i 103-109) Macbeth feels very secure in his position as king of Scotland, and that he has absolutely nothing to worry about. He does not even attempt to decipher the riddle. Macbeth’s arrogance is brought on by the seeming sureness of his position and by excess pride, and it is a huge cause of his downfall.

Actions reflect largely upon the type of person one is and whether one will be a success or a failure. To begin with, Macbeth kills Duncan, who is also a king. The only reason he kills Duncan is that Macbeth has ambition to become the king. Subsequently, Macbeth kills Banquo because he is a threat to him, and he, or his sons, could take the throne away from Macbeth at any time, or so Macbeth believes: To be thus, is nothing, But to be safely thus: our fears in Banquo Stick deep; and in his royalty of nature Reigns that which would be fear’d: “tis much he dares, And, to that dauntless temper of his mind, He hath a wisdom that doth guide his valour To act in safety. There is none but he Whose being I do fear; and under him My genius is rebuked, as it is said Mark Anthony’s was by Caesar.

He chid the sisters, When first they put the name of king upon me, And bade them speak to him; then prophet like They hail’d him father to a line of kings: Upon my head they placed a fruitless crown, And a barren scepter in my gripe, Thence to be wrench’d with an unlineal hand (III. i 52-67) This heartless murder demonstrates Macbeth’s ruthless actions which cause chaos, since the Great Chain of Being has been disturbed. Last of all, Macbeth once again shows his cruelty with the murders of McDuff’s family. Macbeth originally set out only to kill McDuff, and only slaughters McDuff’s family just to make sure that in the future none of them will be able to harm him. Macbeth is not remorseful in any way for any of his actions, and is a cold-blooded killer.

Cowardice and bravery determine whether a character will become a success or a failure in life. If one is a coward, one cannot properly rule a country because one will not be able to stand up to any opposition, and be a guide to doing the right things for others. In fact, Macbeth fulfills his own destiny knowingly when he and Lady Macbeth plot to murder Duncan. Even though Macbeth wants to become king desperately, right before the murder he becomes a coward and tries to back out: We will proceed no further in this business: He hath honour’d me of late; and I have bought Golden opinions from all sorts of people, Which would be worn now in their newest gloss, Not cast aside so soon. (I. vii 33-37) Only after Lady Macbeth’s persuasion and manipulation does Macbeth regain a bit of bravery to proceed with the murder.

In addition, Macbeth is a coward because he manipulates others into doing his “dirty work” for him, as for example, arranging the murder of Banquo: Do you find your patience so predominant in your nature, That you can let this go? Are you so gospell’d, To pray for this good man and for his issue, Whose heavy hand hath bow’d you to the grave And beggar’d yours for ever? (III.i 93-98) Macbeth is not involved in any of the killings, other than Duncan’s, and he cowardly hides behind murderers to avoid any guilt he may have. In comparison, Macbeth shows bravery at the end of the play. Macbeth shows that he is capable of bravery when he does not give up without a fight: I will not yield, To kiss the ground before young Malcolm’s feet, And to be baited with the rabble’s curse.

Though Birnam wood be come to Dunsinane, And thou oppos’d, being of no woman born, Yet I will try the last. Before my body I will throw my warlike shield: lay on, Macduff, (V.viii 32-38) Macbeth knows that he will be overthrown since everything the apparitions said would have to happen for him to be overthrown actually happened, but he still has faith in himself, and continues fighting. Though Macbeth demonstrates both cowardice and bravery, his cowardice far more apparent and intentional, and his bravery is only self beneficial and, therefore, selfish.

Through arrogance, actions and cowardice versus bravery, the protagonist in Macbeth , is regarded as a failure because of his selfishness, and utter lack of remorse for his actions. While other kings strive to do good, Macbeth dwells further and further into evilness and makes it apparent he is the only true failure as a king.

Macbeth: A Failure As King?. (2016, Jul 13). Retrieved from http://studymoose.com/macbeth-a-failure-as-king-essay 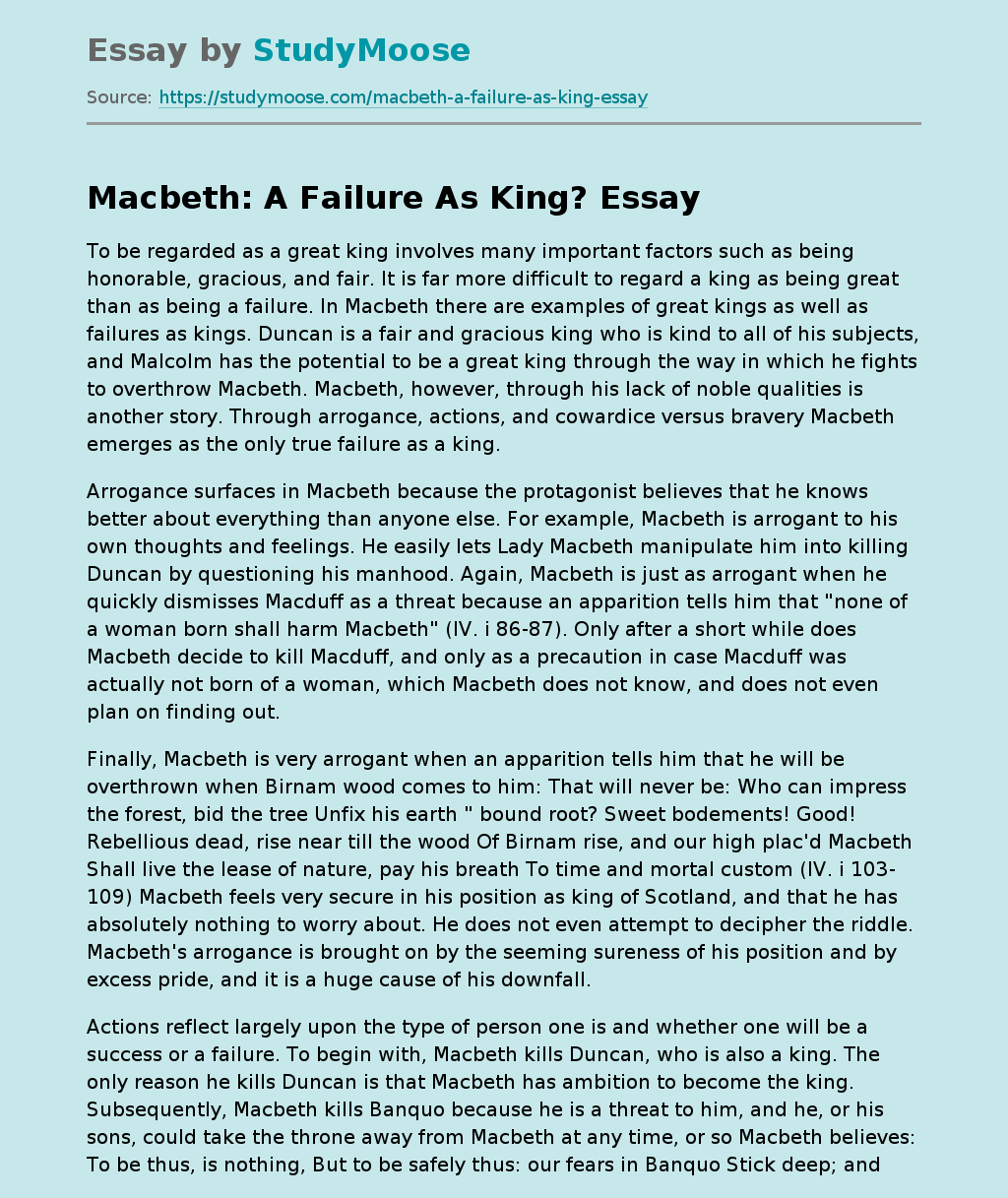