Lord of the Flies Essay

Psychology is the study of the human mind and its behavior. In psychology nurture is the things/abilities that one learns and is taught. Good and evil are two examples of what human nature can do to evolve a human. In Lord of the Flies by William Golding a group of boys get stranded in an island with no adults. This challenges the kids to give up their childhood for survival. Throughout the course of the book the characters evolve with the influence of nature, savagery, and evil.

Don't use plagiarized sources. Get your custom essay on
“ Lord of the Flies Essay ”
Get custom paper
NEW! smart matching with writer

For psychologist like Zimbardo conformity is something that can change the influence of one’s former self. In The Stanford Prison Experiment by Saul Mclead a group of college students are put in a mock prison where they are each assigned a role to either a guard or prisoner. In the experiment the role of the guard is played as the leader and the main principle while the prisoner is the follower and dependent.

Throughout the experiment the students who were assigned to be guards began to take character over the course of hours the guards began to harass the prisoners and feel superior. The prisoners of course obeyed and tried to get on the guards good side betraying their former inmates. In conclusion to the experiment it shows how according to the text “people will readily conform to the social roles they are expected to play… ” meaning that in a state of mind people tend to be something their not influenced by their surroundings and nature.

Along with the role of conformity and nature taking over in Lord of the Flies by William Golding immediately two boys claim to be in charge. Ralph and Jack seem to at first agree to who is going to be in charge settling with the conch. The conch immediately forming a type of authority. As time passes and hunger undertakes most of the boys they begin to think about hunting and killing. From this point the need for different things causes Ralph and Jack to split, for they have different things in high demand. With the separation Jack begins to become a savage along with his crew influenced by their hunger and freedom. At this point Jack and his hunters have been influenced by their surroundings. Discovering abilities that were not yet found or discovered within themselves and doing things they were never capable of.

The introduction of evil and fear wasn’t introduced in the book until one of the littluns mention a “snake-thingy” which is introduced as “the beastie”. From their on the word beast is associated with the littluns and the terror of the island them being alone with no adult and no comfort. Simon one of the good childs on the islands mentions how “maybe it is only us” (Golding 82) signifying that maybe the so called beast is within them. So the evil and fear socialized is the fear of losing innocence and to others it is the form of braveness and the beginning to adulthood.

When people have freedom without limitation or someone to stop them it begins to create a form of evil. As the group of boys begin to lose their innocence and gain more desire to kill the beast they let their fear take over. Chanting “Kill the beast! Cut his throat! Spill his blood! Do” him in” (Golding 141). As they brought in the beast into the circle the so called beast scream on its knees warning the group about a body on the hill, it was ignored, and killed. The beast had fallen onto the edge of the rock where it was thrown a rock with no movements left only with blood running “inch by inch.” Simon was dead. Simon’s intention wasn’t to end up dead on the shore, but to warn the group of boys of the evil.

With the book based on humans having naturally evil nature within it is also associated with them being isolated and being somewhere they normally aren’t. Just like in The Stanford Prison Experiment the prisoners and guards are placed in a prison mock with cells and everything. This influenced them to get into character and take over a role they normally don’t play. As in Lord of the Flies the group of boy left alone and isolated they had to take a role they normally aren’t upon themselves. This makes them obtain a form evil that they don’t recognize.

On the topic of humans being inherently evil in the book Night by Elie Wiesel Elie and his father had just arrived at Buchenwald where his father began to grow weak. His father being weak it led to him to start taking even more care upon his father and give up certain things. His rations of bread and soup were part of that. He then began to give second thoughts to whether he should continue to care for his father. “Yet at the same time a thought crept into my mind: If only I didn’t find him! If only I were relieved of this responsibility, I could use all my strength to fight for my own survival, to take care only for myself… ” This to him was a part of the evil within him feeling ashamed to what nature can bring to his thoughts.

Taking everything into consideration humans are inherently evil. Evil is within all of us and can take over a person. Evil actions, thoughts, and voices seem to be what most people tend to do without knowing it or thinking of it. In addition evil takes advantage of a person and their situation making it the only open solution.

Lord of the Flies Essay. (2019, Nov 18). Retrieved from https://studymoose.com/lord-of-the-flies-essay-example-essay 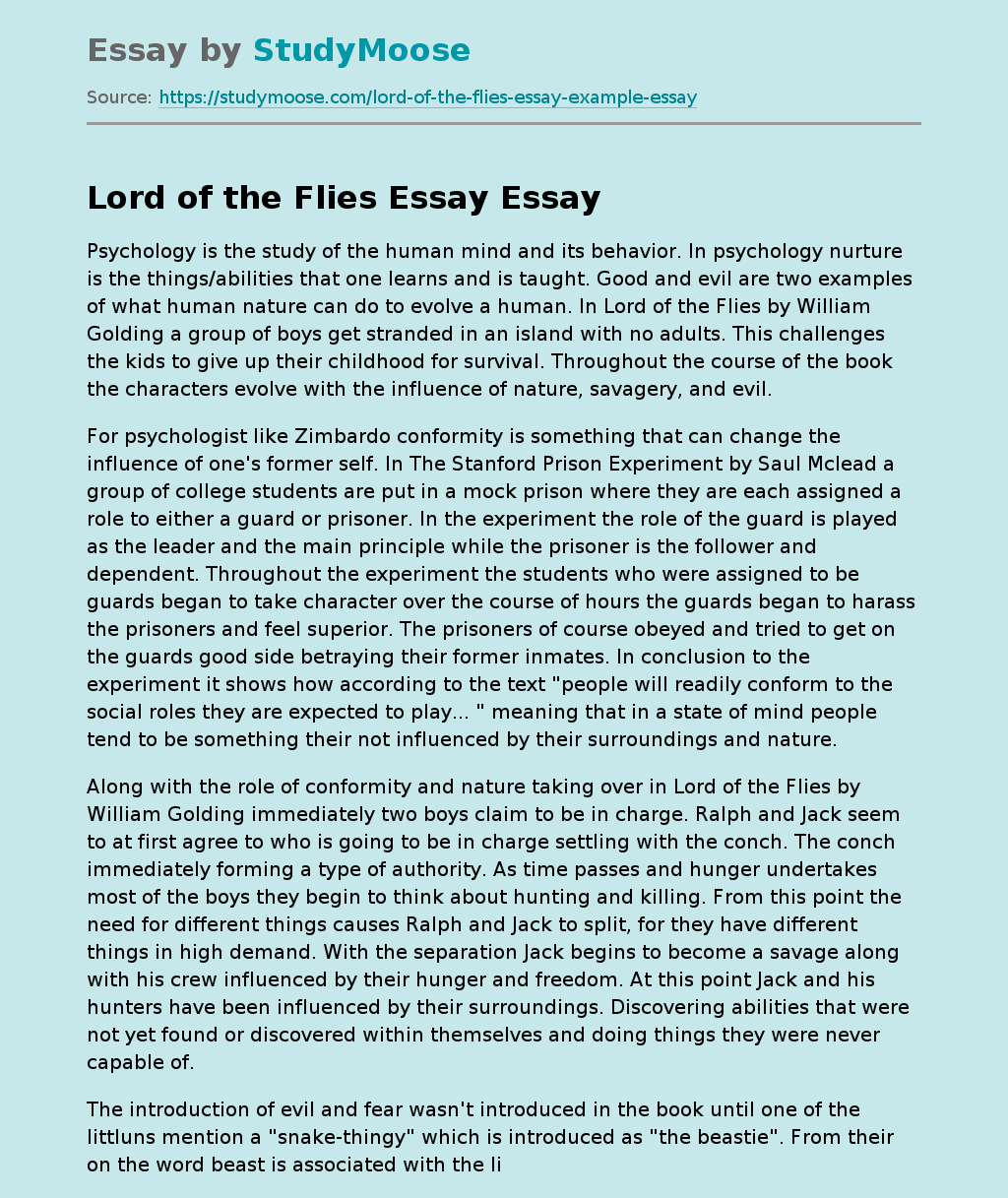