Thematic Comparison of Life of Pi and Lord of the Flies

Throughout the school year we have been studying novels that focus on the complexity of a person in certain situations and how they are to react. We studied Life Of Pi and Lord Of The Flies. Lie Of Pi is a novel about a young that is stranded in the middle of the sea with a tiger and Lord Of The Flies is a novel about multiple young boys being stranded on an island. In these novels, the characters deal with very different situations that somehow correlate to each other in terms of how the characters deal with those situations.

Don't use plagiarized sources. Get your custom essay on
“ Thematic Comparison of Life of Pi and Lord of the Flies ”
Get custom paper
NEW! smart matching with writer

In the two novels it was easy to notice how the characters start to lean away from their human nature and human qualities (some more than others) and feed into their more wild and savage side in order to survive.

All of this leads me to think, does being stranded and away from an actual society lead to the same reaction from different people? Does it lead always lead to savagery and loss of common-sense and human nature? This leads me to believe that, being isolated from a structured society will lead to the downfall of someone’s human nature, common sense, initial thoughts and actions.

We as people love to set up an image of ourselves and who we are as people. We also love to have order and rules made up in hopes of living a somewhat stable atmosphere, this is the same for the characters in the novels we studied.

For Pi from Life Of Pi, he profoundly identified himself as a proud vegetarian, he would say that he “wasn’t Tarzan…” but “…a puny, feeble, vegetarian life form.” (Martel 199) but once he got stranded, he was left with no choice but to go against that saying and everything else that he used to describe himself as by killing and eating animals. And although at first, he shocked at his own actions, like in this quote, “I wept heartily over this poor little deceased soul. It was the first sentient being I had ever killed. I was now a killer.” (Martel, 203) he got used to it and kept killing and eating animals as if it was nothing. In the past even the snap of a banana reminded him of the snap of an animal’s neck. But when he got stranded that completely changed, he would go around kill any sort of animal in order to get some source of food: “Lord, to think that I’m a strict vegetarian. To think that when I was a child I always shuddered when I snapped open a banana because it sounded to me like the breaking of an animal’s neck. I descended to a level of savagery I never imagined possible.”

This proves that when he was thrown into a situation where he had nothing but meat to eat in order to survive, was stranded and desperate, he disregarded his religion (which he is so passionate about) and did things that would be considered immoral for his religion such as, eating fish, turtles and other types of meats (bird meat, human meat etc). This shows that once alone he completely went against what he believed in and who he said he was proving disloyal to not only his religion but himself.

Thematic Comparison of Life of Pi and Lord of the Flies. (2019, Dec 03). Retrieved from https://studymoose.com/thematic-comparison-of-life-of-pi-and-lord-of-the-flies-essay 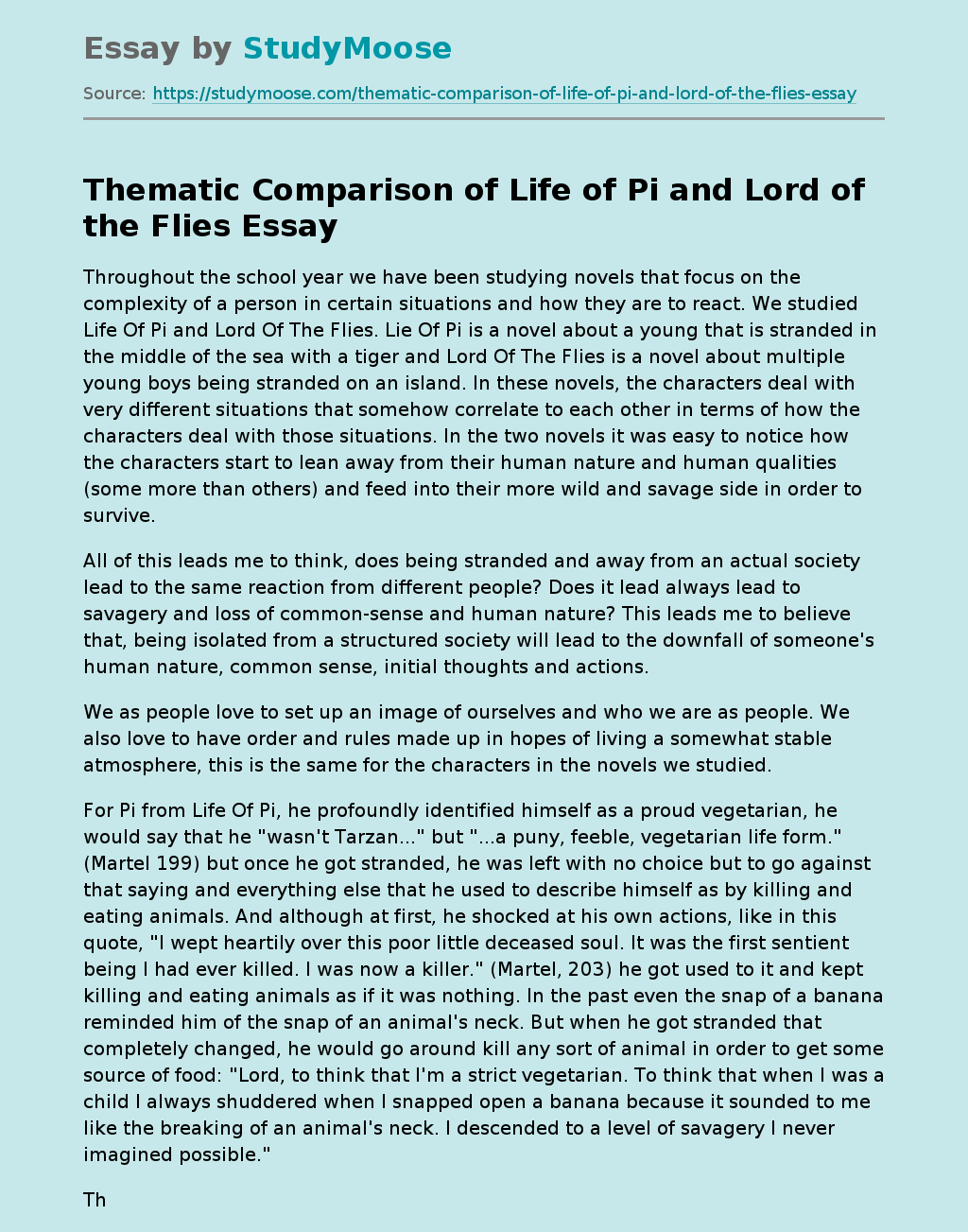