Fredrick Pohl, known as the “Science Fiction Grand Master,” wrote his short story “Day Million” in one night in 1966 (Solstein, 1). This short story became one of the most anthologized stories of it’s science fiction genre and is considered to be one of the best short stories of his collection. “Day Million” is a love story between a boy and a girl that takes place one thousand years from now. This plot summary sounds simple enough, but Pohl’s story is about much more than a simple love story; Pohl’s narrator speaks directly to the reader, and often questions the sensibility of the reader.

Don’t waste time
Get a verified expert to help you with Thematic Analysis of Day Million by Fredrick Pohl
Hire verified expert
$35.80 for a 2-page paper

By doing this, Pohl creates a feeling that nothing is what it seems. Pohl also displays a theme of today’s culture versus the future (or the idea/version of the future that the story creates).

The fact that the narrator tells us a story about the future in the present day automatically raises questions about our ideas of the future, and how we live and think in our present day world.

Pohl challenges our modern day prejudices, and it can be said then that the overall theme of “Day Million” is nothing is what it seems. The theme of nothing is what it seems becomes apparent in the very introduction to the story. Pohl writes, “On this day I want to tell you about, which will be about a thousand years from now, there were a boy, a girl and a love story. Now although I haven’t said much so far, none of it is true” (Pohl, 166).

The narrator speaks directly to the reader from the start, and establishes an untrustworthy voice. The reader is automatically forced to question the knowledge of the narrator, and to decide what to believe and what not to believe.

The reader, then, has to decide what seems real and what does not. Early on, the narrator gently points a finger at our present day prejudices, or at our labels of gender and age. The narrator tells the reader that “The boy was not what you and I would normally think of as a boy, because he was a hundred and eighty-seven years old. Nor was the girl a girl, for other reasons…The reason the girl was not a girl was that she was a boy” (Pohl, 166). The questionable voice and knowledge of the narrator unfolds even more here; the narrator uses the word “normally” here, which points out our modern day notions of what a boy and girl should be, and what is considered to be “normal.” The narrator also reveals our thoughts toward age; Don could not be a boy because of his age, but in this future time, age does not matter, and Don will always be considered a boy.

The narrator goes on to state, “How angrily you recoil from the page! You say, who the hell wants to read about a pair of queers?” (Pohl, 166). The narrator moves from gentle commentary to almost full blown attack upon the readers sensibilities, not only questioning the readers sensibility, but pointing out our prejudicial views. The use of the word “queer” is not an uncommon use of language in our modern day society. The narrator assumes that the reader will recoil from the page, or assumes that the reader would have an immediate problem with homosexuality, ultimately questioning our sensibility. But Pohl is doing more than simply pointing out our use of labels and our ideas of what normal are; he is commenting on our prejudices as being inferior to the attitudes and notions of the future.

Pohl is comparing the attitudes and notions of the society that Don and Dora live in to ours in the present day. When describing Don’s appearance, the narrator states, “In a way, he probably would have looked peculiar to a man from the 20th century, with his glowing eyes and seven-fingered hands; but to himself, and of course to Dora, he looked mighty manly and grand” (Pohl, 168). Unfortunately in our society any person with glowing eyes and seven fingers would be considered an outcast, but in Don and Dora’s world, Don is nothing short of perfect. Pohl also comments on the smallness of our present day world and once again questions our sensibilities.

The narrator states, “Oh, I can see you now, you eaters of charcoal-broiled steak, scratching an incipient bunion with one hand and holding this story with the other, while the stereo plays d’Indy or Monk. You don’t believe a work of it, do you? Not for one minute. People wouldn’t live like that, you say with an irritated and not amused grunt as you get up to put fresh ice in a stale drink” (Pohl, 169). The narrator accuses the reader of not believing, of not trusting the story as it is told. The narrator also makes assumptions that the reader will be “irritated” by the story, and that the reader will simply “grunt” at the way Don and Dora live.

This commentary makes our modern day world seem small, and our viewpoints on lifestyles even smaller; we are thought of as closed-minded and almost intolerant, and the idea of nothing is what it seems is relevant based on the fact that we can’t believe in what doesn’t seem real or probable to us. Finally, Pohl comments on the smallness of our modern day world by writing, “…and one hell of a lot more so than anything you are going to find in ‘real life.’ Go ahead, glare and grumble. Dora doesn’t care. If she thinks of you at all, her thirty-times-great-great-grandfather, she thinks you’re a pretty primordial sort of brute. You are” (Pohl, 169).

Here, the narrator lets us know that Dora will think of us as primitive, if she even bothers to think of us at all. The narrator also comments on our idea of “real life” versus the life of the future, or the life that Don and Dora lead. A life in the future offers much more than our life now. Pohl chooses to put real life in quotes, pointing out that our modern day life is just an idea, just a tiny part of history as compared to what the future holds. It can be said that “Day Million” is more than just a simple love story between a boy and a girl. After writing this short story in one evening, Pohl was able create a narrator that spoke directly to the reader.

This narrator questioned, and even at some points, attacked this readers sensibility. This narrator also establishes an untrustworthy voice early on in the story, forcing the reader to question what is true and not true, creating a theme of nothing is what it seems. Pohl’s story also creates a theme of our modern world versus the future, and challenges our modern day prejudices. The narrator uses modern day language, points out our use of age and gender labels, and questions our standards of normalcy. Finally, Pohl challenges the smallness of our modern day world as compared to the future world he created. Pohl’s narrator points out the inferiority of our world as being closed-minded in comparison to Don and Dora’s world. 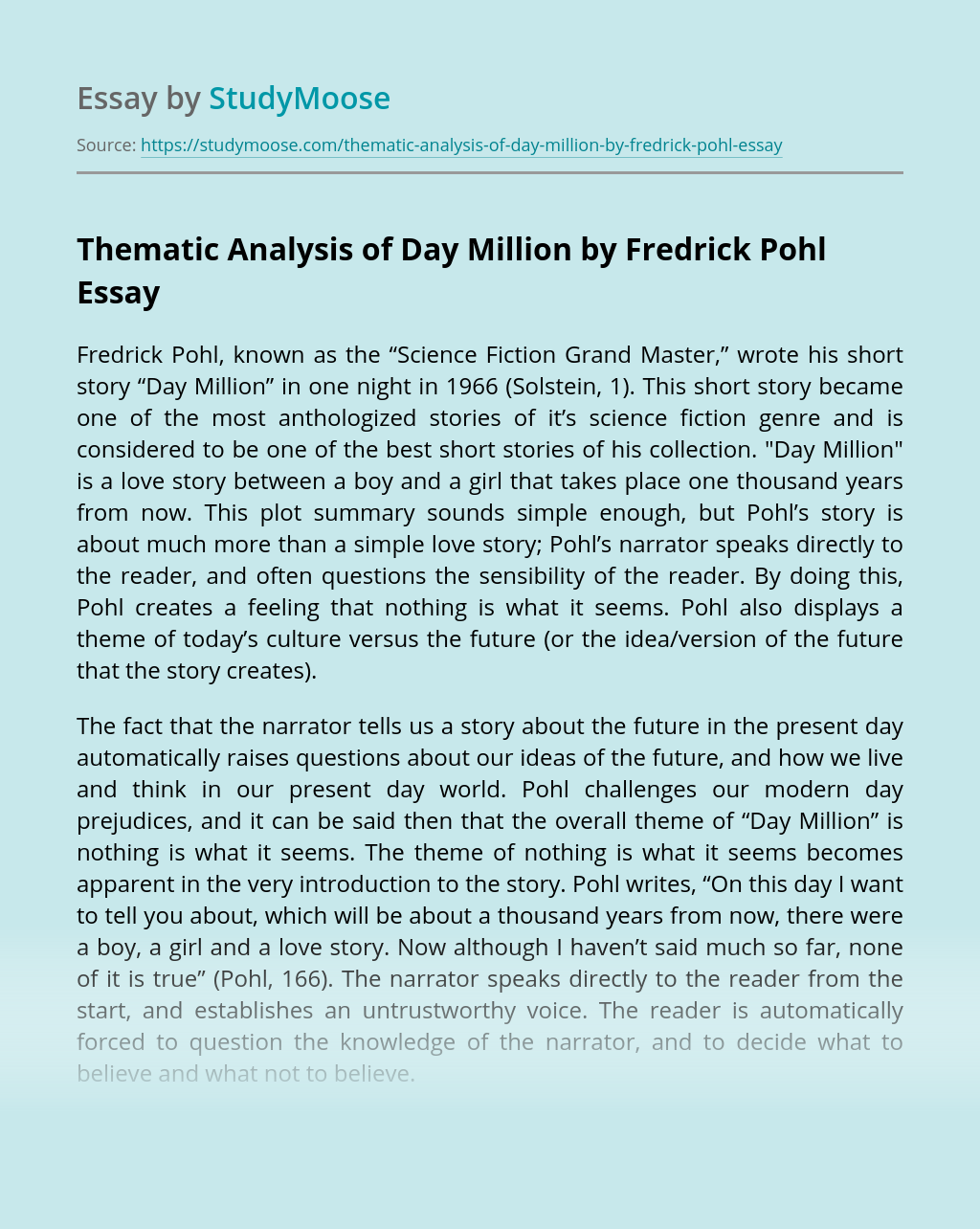 Don’t waste time
Get a verified expert to help you with Thematic Analysis of Day Million by Fredrick Pohl
Hire verified expert
$35.80 for a 2-page paper
Stay Safe, Stay Original