Humans in Lord of the Flies by William Golding

We are constantly forewarned how much evil is in the world. We are surrounded by reminders on news, radio, television, etc. We wonder how anyone could or would want to ever do such a thing because we never would. Right? William Golding’s novel, Lord of the Flies shows how that can change and what humans are capable. He illistrates this idea through a group of boys becoming ones who mistreat, control and even murder others all because they have been stranded on an island.

Don't use plagiarized sources. Get your custom essay on
“ Humans in Lord of the Flies by William Golding ”
Get custom paper
NEW! smart matching with writer

In his novel, Lord of the Flies, William Golding asserts that us humans are inherently evil through murder, mistreatment, and control.

Golding conveys the boys evil intentions when describing the boys evil impulse to murder Simon. Throughout the novel, Ralph and Piggy are trying to build structure and civilization to avoid violence. Murder may have seemed unimaginable to them, however, they were eager to take place in the killing of Simon later on in the story.

For example Golding writes, “Ralph, under the threat of the sky, found themselves eager to take a place in this demented but partly secure society”(Golding ). When he says they are eager, meaning Ralph and Piggy, it is a contrast to what they identify their values as. Murder is the most evil expression by man and that means they have now done the worst imaginable. However, Piggy and ralph still believe themselves as orderly and civilized even the morning after they murdered Simon. “‘That was murder.’… ‘We was scared!” said Piggy excitedly.

“Anything might have happened. It wasn’t what you said”‘(Golding ). Piggy the one known for reason and logic says it was not murder because they aren’t evil. Right? This means that they have done an act so evil that Piggy won’t even admit it. The thought of being a murderer sickens him, however he was eager to do so because his evil is present no matter what.

Golding confirms that humankind is inherently evil through excessive control. The Beast is a motif that represents a power. It controls the boys and encourages them to act in inhumane ways. The more present the “Beast” is in the novel, the more evil the boys exploit. This is because the boys are afraid of the Beast, the fear it brings them gives it control over them. The evil that they accused the beast of was just doings of themselves. Mankind’s essential illness is the reasoning behind that. It is the darkness that is deep down in all of us, the evil we try to hide, the beast. Simon was the only boy to understand that. In the Lord of The Flies, it stated, “‘What I mean is. . . maybe it’s only us’… Simon became inarticulate in his effort to express mankind’s essential illness”(Golding 126). While the boys were contemplating on what the beast could be, Simon couldn’t express to boys it was themselves. Beast and their beliefs in it are more present because it demonstrates mankind’s essential illness in all of them.

Golding uses Lord of the Flies to send a universal message that evil is present in every one and in many ways. This entails that our actions aren’t the only dark part of us, it is our thoughts too. In an article by The New York Times, they said, “in the Journal of the National Association of Social Workers, cites a case in which a mother made clear that she wished her ex husband dead. Her two sons, 7 and 8 years of age, eventually got the message and killed their father.” This example conveys the idea that evil thoughts can have the same impact as our evil actions. Many can agree that a mother telling her children is inhuman. However, the children are still young and act off of instinct and their instinct was to kill. Golding’s message of all humans being evil deep down is still true in our world today.

Finally, Golding draws attention to the evil within mankind through mistreatment. Jack is known for being one of the most bloodlust characters in the book. However, his evil impulses don’t stop there. In Lord of the Flies, Golding writes, “His voice rose to a shriek of terror as Jack snatched the glasses off his face”(Golding . . ). Jack performs mistreatment in this quote when he steals from Piggy. He steals Piggy’s glasses leaving him blind and at a disadvantage. Now, Piggy and Ralph have no way to make a fire, all due to Jack.

Humans in Lord of the Flies by William Golding. (2019, Nov 30). Retrieved from https://studymoose.com/lord-of-the-flies-essay 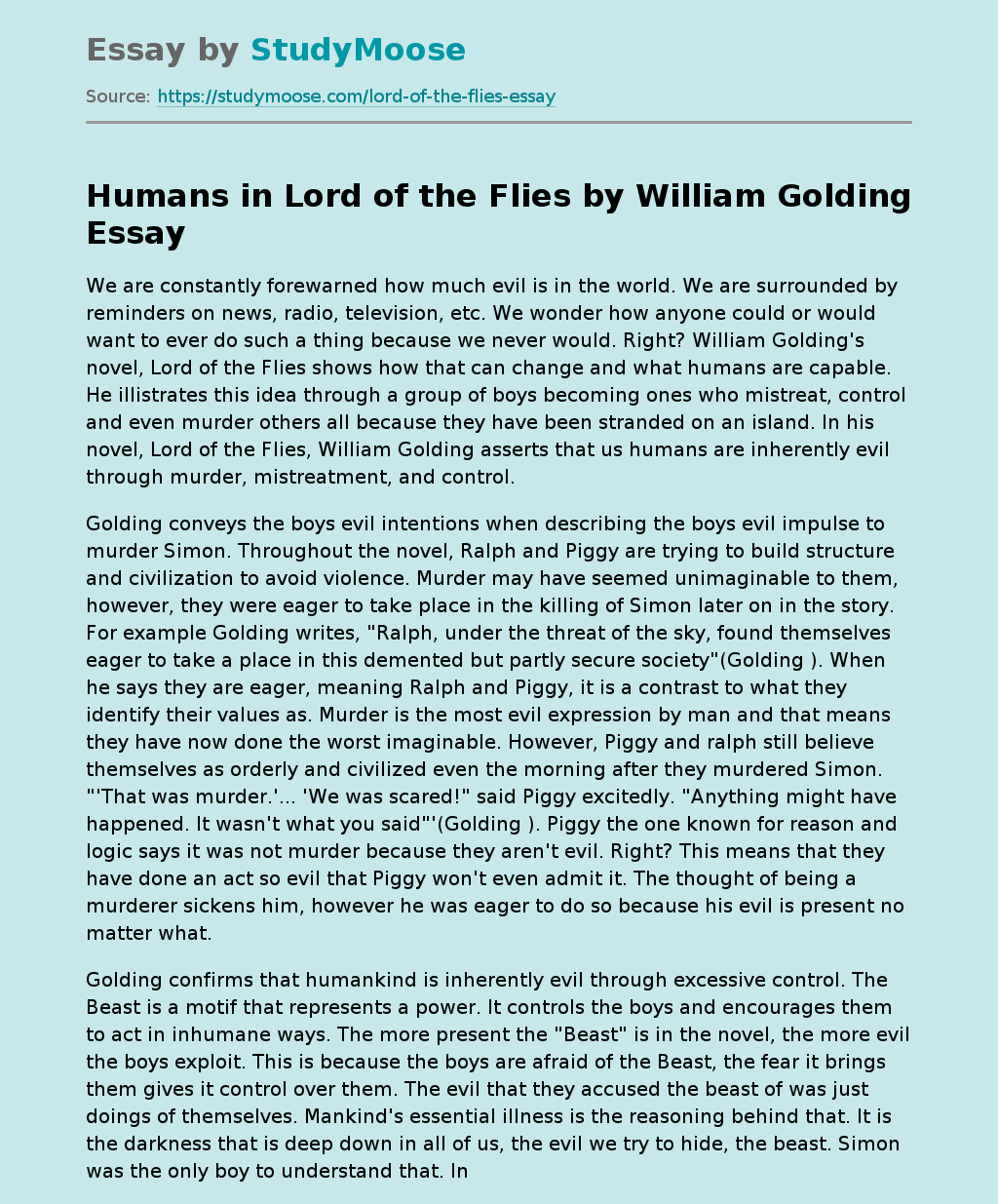