The first question that must be asked before answering this question is: What exactly is logical thinking? Logical thinking is the process in which one uses reasoning consistently to come to a conclusion. If this definition is strictly followed, logical thinking cannot be affected by any outside influences as long as the premises are truly valid. For example the syllogism:

All mammals are warm blooded.

is truly logical because the major premise is true.

Don't use plagiarized sources.
Get Your Custom Essay on Logical thinking Just from $13,9/Page

In a more ‘general world’ however, we refer to logical thinking as simply deducing a reasonable explanation or conclusion from what is already and personally known. What is personally known is often fallacious because of stereotypes, cultural taboos, and/or prejudices. Because of this, the premises used in reasoning are not always truly valid but are accepted as valid. This is what influences the conclusions that are reached; the premises which have been ‘jaded’ by culture and individual beliefs.

There are many aspects to culture and all of them affect what is personally known and the way one makes decisions.

These are mainly language, background (history), race, religion, individual beliefs, and even geography. Individual beliefs are an aspect of culture which are defined as being opinions and convictions. These are normally based on the other aspects of culture mentioned. For example a person who is a Unitarian would most likely have different beliefs about the roles of women in society than someone who is Evangelical.

In this example, the individual belief concerning women was based on the code developed by the particular religion. Although religion is a very strong force in our society today, beliefs are also cultivated trough family, education, peers, and in many cases can be developed depending on the area and time period that a person lives in. (For example, my grandfather was greatly affected by the Great Depression and therefore believes strongly in working hard and saving money.)

It is very often that these individual beliefs and culture affect a person’s reasoning. In reasoning, the conclusion is the statement one is trying to prove; the premises are those statements which provide evidence for the conclusion. Arguments are traditionally broken into two types; inductive and deductive. It is only the deductive argument which provides conclusive evidence since it deduces from the general to the particular.

All mammals nurse their young.

All whales are mammals.

This syllogism is deductive because the premises provide evidence for the truth of its conclusion. Inductive, on the other hand, argues from the particular to the general and the evidence is not sufficient to guarantee the conclusion except by chance.

All mammals nurse their young.

In this example the premises do not provide sufficient evidence for the conclusion because it does not say if other types of animals nurse their young. Once a conclusion has been reached through deductive reasoning it then has to be determined if it is valid or invalid. This is where the culture and individual beliefs can affect the conclusions which are reached. Often the argument is not true because the premise used is an assumption, biased, or fallacious.

All Muslims are terrorists.

He is a terrorist.

This example does follow deductive reasoning, and is valid, but the major premise is false. If the ‘arguer’ truly believes that all Muslims are terrorists, they have used logical thinking correctly but have come to a wrong conclusion because of their ‘false knowledge’ or prejudice of Muslims. Most likely this occurs because the ‘arguer’ is basing his/her reasoning on personal knowledge/opinions. Culture’s affect on logic usually occurs unintentionally and goes unnoticed. Because of the nature of humans and the different way our cultures have developed, these fallacies which occur are stronger for some cultures.

Culture and individual beliefs are capable of affecting the premise and reasoning in every ‘area’ of thinking. Because all cultures are different, some are more likely to commit certain fallacies than others. A person’s culture is based on many things as mentioned earlier; language, history, geography, religion, and race. All of these things play a different part in cultures, and affect reasoning in a variety of ways and areas. For example, I know a woman who taught math in a village in Sierra Leone (Africa).

She had a very difficult time teaching geometry with three dimensional right angles because everyone lived in round houses. It was difficult for them to envision the shape because they were not faced with it frequently. This thinking in math would not have been affected as greatly by another culture because of the environment and culture which developed dwellings with three dimensional right angles.

The main aspect of culture which affects logical thinking, I believe, is history. A person’s or people’s history is responsible for many traditions, opinions, and aspects of a certain culture. History is often the cause of stereotypes, prejudice, and cultural taboos; which are all examples of things which affect people and lead them to arrive at fallacious conclusions. For example in Hungary it is ‘wrong’ to chink beer mugs before drinking. This is because of past relations with Austria. Austrians would touch mugs and toast to being ‘comrades’ before drinking beer.

Because of the former situation of Hungary being occupied by the Russians, they associated chinking mugs to the Communist regime. The actual act of touching glasses is not wrong physically but it has become associated with an ‘unpleasant’ period of Hungary’s history and as a result has become a cultural taboo.

Language is another aspect of culture which is capable of affecting reasoning. For example, in some countries it is possible to assume where a person is from or their social status by the dialect or accent they speak with. This could be very dangerous when using these assumptions in logic. If one assumes that a person is from a lower social class because of their accent, this conclusion could be fallacious if the assumption turns out to be false. This is how prejudice and stereotypes occur; when a judgment is made which is not always true.

Prejudice in today’s society has come to mean: a feeling, favorable or unfavorable, towards a person or thing, that accompanies an unsupported judgment. A prominent theory to the origin of prejudice is history. Marx especially believed that prejudice was at its highest in the nineteenth century when European imperial expansion called for explanation. Because of this, many began referring to colonial people as ‘inferior’, ‘requiring protection’, a lower form of evolution’, a burden etc. It was this process of exploitation that the theory of race and a definite distinction between cultures was recognized.

Although there are other factors resulting in stereotypes and prejudice such as the social context in which they originated in, history still plays a large part. (For example, Anti-Negro prejudice in America is historically based; having its roots in slavery and the failure of reconstructing the South after the Civil War. If this also has psychological causes, these are still affected by the impact of historical circumstance.)

It is when these stereotypes and/or prejudices are used in reasoning that the conclusion could be fallacious. For example it is a stereotype that all white Americans living in the South are racist. This stereotype could lead one to reason that ‘Joe’ is from Texas and therefore he is racist against African Americans. Although this follows the deductive form of logic, and is valid, the premise is a stereotype and fallacious and therefore the conclusion is also false.

Logic in the strictest sense is not affected by culture and individual beliefs. In the ‘real world’ however, everyone is not the same and everyone is not capable of knowing everything. Because of this, a person’s culture and individual beliefs affect reasoning. This is because they believe the fallacious premises which are used to make a conclusion. They could believe these things because of deep rooted stereotypes based on prejudice. Culture and individual beliefs affect different areas of logic differently depending of the culture. A person from Alaska’s reasoning in fishing will differ from a person’s living in the Bahamas. Finally, different aspects of culture have a different ‘degree’ of effect on reasoning depending on what influenced the culture more strongly in development.

For example, generally in Europe history played a large part in developing the existing cultures; while in Africa the geography and religious rituals are more influential. It is hard to say if the effect of culture and individual beliefs on logic is negative or positive. These effects on reasoning are a major cause to the misunderstandings in the world today. On the other hand, the world would be a bland place without the present diverse cultures. It is only when tolerance and acceptance become a part of our individual beliefs that it might be possible for culture and beliefs to not negatively affect conclusions reached. 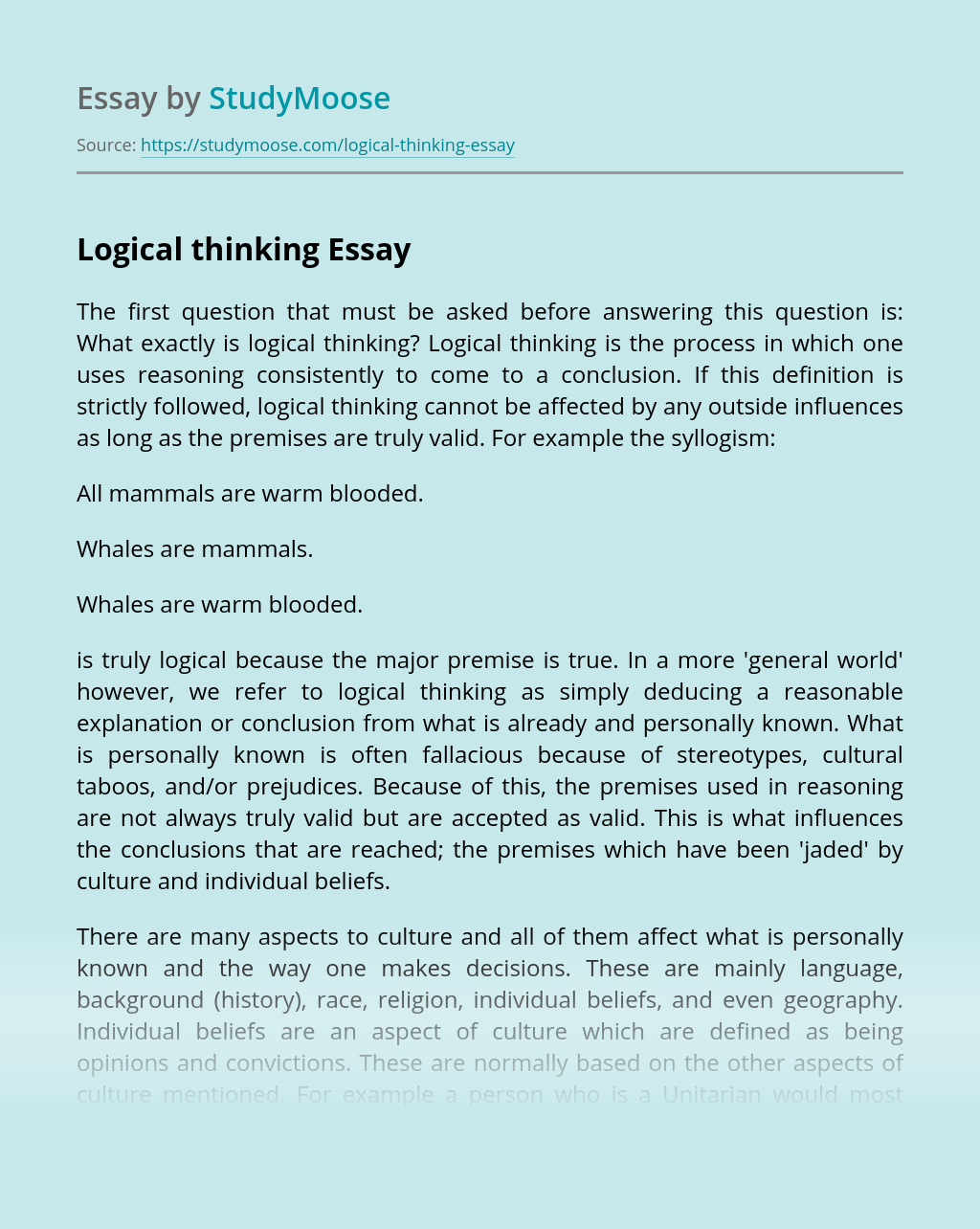 While reading both articles The Death Penalty Violates the Constitution of the United States and Cyberbullying Has a Broader Impact than Traditional Bullying, I found that there were both deductive and inductive argument presented with in the articles. On the first article about the death penalty, the author used inductive arguments to make his point....

Frederick Valentich was twenty years old who was fascinated by the idea of Aliens and UFO’s and he researched websites and books to discover many sightings known around the area. Valentich needed flying time, but the trips he made before his disappearance, were a fail. He had another trip planned out to fly over Bass...

Information need not be passed down through physical means like mail or newspapers. It can be done through SMS (short messaging service), a phone call or even an email. Underlying such great inventions is the use of electronic devices to transmit and receive signals. Due to the demand for faster and larger data flow, complex...

None of the proposed philosophical theories is exact, not even a combination of two or more theories (Sayre, 2011). However, Descartes has unique way of metaphysical argument concerning existence of God. Descartes’ Discourse on the Method (Part IV) ends surprisingly with a claim of God’s existence, which can be deduced from the interrelationship between mind,...