Living Up to the American Ideals

“We hold these truths to be self-evident, that all men are created equal, that they are endowed by their Creator with certain unalienable Rights, that among these are Life, Liberty and the pursuit of Happiness.—That to secure these rights, Governments are instituted among Men, deriving their just powers from the consent of the governed.” This is how, in 1776, Thomas Jefferson began writing one of the most important documents in the History of the United States. This document is the Declaration of Independence.

+84 relevant experts are online
Hire writer
Don't use plagiarized sources. Get your custom essay on
“ Living Up to the American Ideals ”
Get custom paper
NEW! smart matching with writer

In these two sentences, Thomas Jefferson introduced a new outlook on the nation based on ideals. Since then, America as a nation has been trying to live up to the 5 American ideals; democracy, liberty, opportunity, rights and equality. People today strive to have the same opportunities as others. Women and African Americans fight for their rights and equality. And, America as a whole tries to live up to the ideal of Democracy.

However, no matter how hard America tries, it is somehow still difficult to meet the ideals expressed for the people in the Declaration of Independence. One ideal that America has not reached is equality. Equality is defined as the ideal situation where everyone is treated the same and valued equally. Usually, the people who are affected most by inequality are African- Americans, women, immigrants and people of the lower economical class. Today, some Americans believe that women are having such successful careers, that they are replacing men as the primary source of income in America. While that is somewhat true, the women still make only 70% of what men make.

The pay gap only shows women are still not equal to men and progress still needs to be made. African Americans are also not equal.

Even after slavery has ended, Jim Crow laws went into effect, which meant that the best of everything was reserved for whites’ only-schools, jobs, neighborhoods, hospitals, etc. This meant that Blacks did not have the same opportunities as whites did. African-Americans could not go to a white school, white bathroom or any white restaurant. This is a great example of inequality. This inequality still exists today for Blacks. For example, In New York in the year of 2004, statistic show that about 50% of Black men were unemployed. One of the men who was being interviewed said “ I strongly believe racism plays a part. I feel like as black men, we have a black mark on us now, as of stereotyping and everything that’s been going on in our communities.”

Because of the stereotypes and other people’s point of view on the issue of race, it is difficult for some African-Americans to find a job. In some cases white men are more likely to get the position if there is another candidate who is of the African-American race. This once again shows the inequality that some citizens of the United States have to face and farther proves that America has not lived up to that ideal. Just like American people have not achieved the ideal of equality, they also did not achieve the ideal of rights and opportunity. Rights are defined as powers or privileges granted to people either by an agreement among themselves or by law. Opportunity is defined as a chance for people to pursue their hopes and dreams. As a country, America is still struggling to live up to both of these ideals. Because equality and rights go hand in hand, it is not possible to have equal rights without equality or equality without equal rights.

As the paragraph above says, women are still unequal to men and do not have the same rights, also some African Americans struggle to have the same rights as whites. However another example of unequal rights is when during the Industrial Revolution, factories hired immigrants and young children at very small wages. Immigrants and children were working more hours than regular people and getting paid less. Children, especially, got paid a significant amount of less money than adults. This is only one example of how their rights were violated. Another case where someone experiences the violation of their own rights is in the book “Zeitoun” written by Dave Eggers. “Zeitoun is a nonfiction, true-life novel written about Abdulrahmaan Zeitoun, who stayed in New Orleans during Hurricane Katrina.

After the hurricane, he encountered officers who took him and three of his friends and put them in a prison cage behind the New Orleans Transportation Center. Abdulrahman Zeitoun was suspected of being a terrorist and a part of Al Quida and was kept in prison for weeks without a trial or even a phone call to call his wife, Katherine. Zeitoun’s rights were violated when he was kept in prison without a trial, almost as if he was guilty until proven innocent. This situation once again proves that America has not achieved the ideal of rights or equality. There are also many cases of discrimination against the disabled. This is a significant problem because often disabled people depend on others due to not being able to find a job. One example of discrimination against the disabled is when Illinois violated the Americans with Disabilities act.

The State illegally denied two officers their pensions because of their health. The Justice Department said that the men were victims of a civil rights violation and sued the city and the state of Illinois, charging discrimination in the case of both police officers. The city and the State both agree that was unfair, but they said that they do not have the authority to change anything. These two officers were affected by the not achieved American ideals of opportunity, equality and rights. America has passed many laws to make sure that people are not discriminated for any reason, however not everyone is willing to abide these laws.

The remaining two ideals are democracy and liberty. Democracy is defined as a system of government founded on the simple principle that the power to rule comes from the consent of the governed. And Liberty is simply defined as freedom. These two ideals are greatly cherished by America. The U.S is promoting democracy, but keeping it a true democratic model is becoming difficult. One of the things about democracy is that all members of the society must be equal. Since the US is threatened by the persisting inequalities, the American people are farther and farther from living up to that ideal of democracy.

America considered itself a democratic country even when women and Africans Americans were not allowed to vote, which is a clear example of inequality. The US believes it is a democratic country today even when people are still facing similar problems today. Just as democracy is an ideal yet to be met, liberty is too. It is difficult to define liberty but most would say that it is the freedom to be themselves and live the life they want to live. Basic freedoms in the Bill of Rights talk about the liberty of speech and the right to bear arms.

However, when the Jim Crow Laws were passed, the African American people had to live with discrimination and racism. They did not have the freedom of speech or freedom to bear arms. They were often verbally abused or beaten and they could not say anything because they knew they would go to jail. As a nation, America is now stronger, however it is still on a long journey to meeting the five ideals set forth for the people by the Declaration of Independence.

All of the five ideals somehow trace back to the one ideal of Equality. If everybody was equal, the US would be a few steps closer to living up to the five ideals that were set for the people by Thomas Jefferson in the Declaration of Independence. Despite the hard attempts, America has still has not accomplished that goal. However, the government keeps passing laws and trying to prevent inequality and discriminations all through out the country. The US has come far as a nation and it still has a long way to go, but if the people and the government continue to work together, there is no doubt America has the potential to accomplish these ideals.

Living Up to the American Ideals. (2016, Nov 09). Retrieved from https://studymoose.com/living-up-to-the-american-ideals-essay 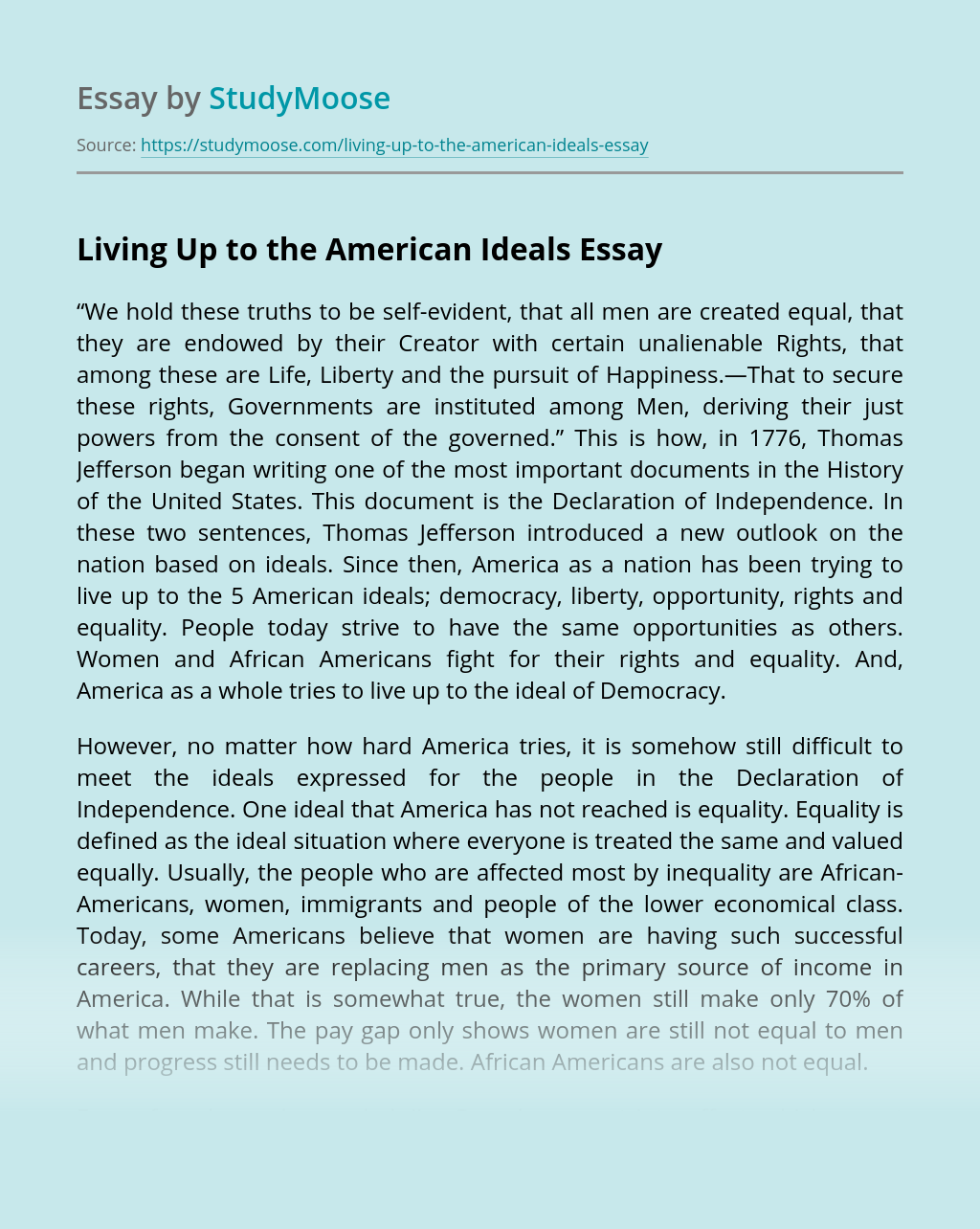