Anthem by Ayn Rand is a political satire that makes one appreciate how fortunate the citizens of a country with so many freedoms, like America, are. Freedoms to choose one’s own destiny and explore the untouched frontiers of the scientific world are gifts that should never be, but often are, taken for granted. Rand’s bold novel that pokes fun at the stringent laws of communism reveals that her own political stance would be greatly supported by the first and second amendments and the policies regarding having children in America.

Don't use plagiarized sources. Get your custom essay on
“ A Political Satire Anthem By Ayn Rand ”
Get custom paper
NEW! smart matching with writer

The mockery that Ayn Rand makes of the dystopia in her novel gives helpful clues as to what her own political views are. It appears that Rand believes in complete individual freedoms and a largely hands free government. Rand is against collectivism and believes that the government should accommodate the unique needs and desires of every citizen. Each person should feel a strong sense of identity that shares no connection with the government.

The advancement of technology and new knowledge are positive for the best interests of society.

It seems Rand would agree with the idea that people should act on any rational or irrational desires to achieve their highest potential of personal happiness. It is human nature to desire individuality and to feel accomplished because of “The word which can never die on this earth, for it is the heart of it and the meaning and the glory. The sacred word: EGO” (105). Ego, this sense of self-worth, is in Rand’s opinion the only thing man needs to survive.

One man should not be considered as merely a piece of a brotherhood; he should stand alone and walk proudly knowing that everything he needs to survive lies within his own heart.

The first amendment to the United States Constitution is a perfect example of a law at the national level today that easily fits in with the views of Rand. The first amendment guarantees that citizens have the right to freedom of speech, press, religion, and assembly. Allowing citizens to speak freely and express their opinions is the foundation for a country full of unique people with a strong sense of self. Freedom is a gift that should not be taken for granted, “I guard my treasures: my thought, my will, my freedom. And the greatest of these is freedom” (95).

In Rand’s opinion, no matter how hard governing forces may try to categorize all men as one, “centuries of chains and lashes will not kill the spirit of man nor the sense of truth within him” (98). The ability to speak freely without fear of harmful consequences allows brilliant minds to stray from conformity and experience joys that “belong to us alone, they come from us alone, they bear no relation to our brothers, and they do not concern our brothers in any way” (86). The second amendment, which permits citizens the right to bear arms, would also go along with the political views of Rand.

A reoccurring theme in Anthem is the idea of fear being able to silence strong thoughts and emotions. Whether it be the fear to speak because “all must agree with all, and they cannot know if their thoughts are the thoughts of all” (47) or fear to leave the house and risk the dangers of our everyday life, the second amendment gives a comforting sense of security to many people. Characters in Anthem are limited in terms of expression because “fear walks through the City, fear without name, without shape. All men feel it and none dare to speak” (46).

The policy that not only allows citizens to choose whether or not they have children but also allows parents to name their children whatever they choose is a policy that Rand would agree with. The adults in Anthem are sent once each spring to the City Palace of Mating to reproduce. In our society today, having a child is not considered a responsibility to one’s country, it is viewed as a personal choice. Equality and liberty are two words used to name individuals in the book, born into a society where, ironically, neither of these exists.

In Rand’s dystopia, “it is a sin to give men names which distinguish them from other men” (41), but the beauty of naming a child in modern America is that the name will distinguish, in one small way, him from every other person on the earth. Although I do not completely agree with the self-sufficient lifestyle Rand has influenced, after reading Anthem I can greater appreciate the munificent freedoms that our government has endowed me with. I can also walk with a strong sense of personal identity and the notion that even though I may be a member of the brotherhood of my country, I am still a unique, powerful individual. 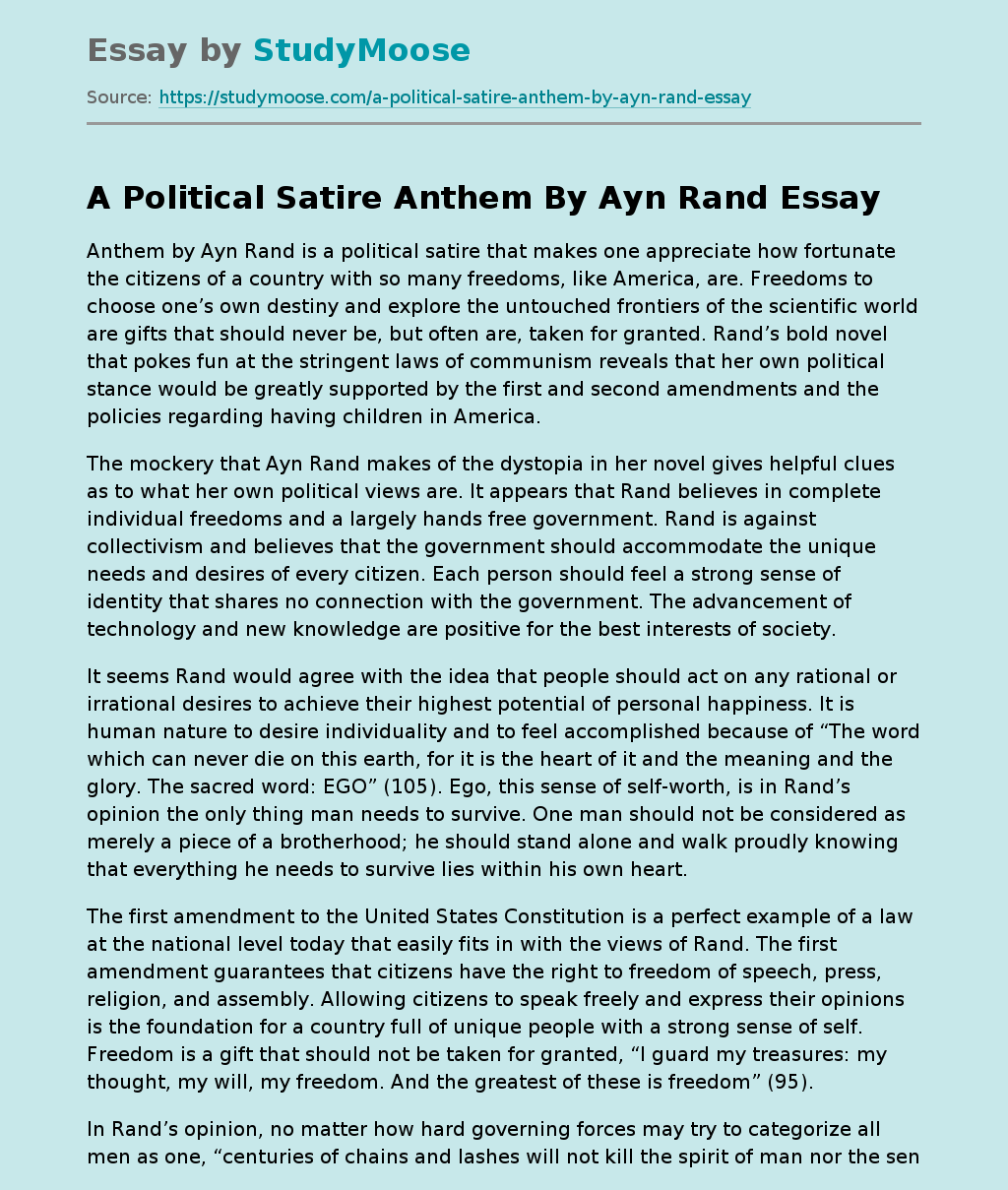