No “I” and no “you”, just “we. ” How could we live in a world like that? Ayn Rand’s book shows a twisted and different form of collectivism. Everyone is told what they have to do for the rest of their future. Children are not even allowed to know who their parents are and are never given the chance to meet them. Although, only one shines in the society that no one else may see until now. Equality finds it difficult to find individualism in his life and in the rules of his society.

Don't use plagiarized sources. Get your custom essay on
“ Equality’s Self-Reflection in Anthem by Ayn Rand ”
Get custom paper
NEW! smart matching with writer

Equality eventually finds individualism in escaping, to a haven of his own, from his odd society.

Equality can then find peace with himself and can live in a more individualistic life in his newfound house with “The Golden One” in the forbidden and Uncharted Forest. This forest had been banned because no one had “known” what was beyond the tree line. Equality had experienced many emotions but the three major ones experienced by Equality are individualism, self-confidence, and trust; these quotes need to be explained.

To begin, the first quote states, “To be free, a man must be free of his brothers” (Rand 101). In this chapter, Equality describes how he feels about his past society.

He also now gives himself a new name, Prometheus, after the god who had taken light from the heavens and had brought it to man. He then named, “The Golden One”, Gaea who was the mother of Earth and of all gods.

Equality then explains to us how we must not be tied down by our friends or peers. We should be allowed to make our own choices, even though some peers may not accept this decision, we should be allowed to live independently. Freedom should only be taken away by one’s self, or if someone has committed something so sinister that he or she’s rights and freedoms should to be taken away.

Anyone’s freedom should be preserved as should everyone else’s freedom. Equality feels he is the only one with his head on straight now and that he is the only one that can slowly turn this confusing world around. The next quote states, “It is the mind which thinks, and the judgment of my mind is the only searchlight that can find truth” (Rand 94). This quote is from chapter eleven in which during this chapter Equality describes how he is done with the word “we” as it is destructive to society, to a certain point.

At this point of the story, Equality is describing the aspects of his mind and how it will help him find his new world and where to start his own society over, in a sense. He believes only his mind can find truth because his old friends are still absorbed in the collectivist society that Equality can’t stand anymore. He wants to become a one of a kind in history and to create a name for himself that everyone will remember. He will not only follow in his old societies footprints but will instead follow his anestrous ways of society.

Equality also feels that it is necessary to find truth in his life about past life before the collectivism era and society had started. The ancestral ways that had individuality and creativity. The world was colorful with life then. Equality’s life is now so dull and boring. Equality wants to start his own society where he believes that everyone is to be treated equally, hence his name. He doesn’t believe that people should be chosen for what they do for a living and rather let them choose what they would like as a living.

Equality realizes he can turn this world around but he needs to trust himself to do that because it will take time. The last quote, from chapter twelve, states, “And we thought we could trust this being who looked upon us from the stream, and that we had nothing to fear with this being” (Rand 80). Equality is explaining how all humans thought they could trust themselves running that collectivism society that he had so gratefully left. He realizes he had everything to fear from the twisted society that he lived in.

Equality had trusted himself enough to completely let go of his old society, to leave everything behind and adopt a new culture. He must have trusted himself immensely to have done this. He also realizes humans are much too smart to govern that society and wonders if they were just too afraid to contradict their government or just did not trust themselves to try and overthrow it. Equality realizes he should be confident in himself. He is a very headstrong person and is not persuaded so easily. That is why he had left his society in the first place.

Equality would like to live as an individual where he would not work together for the common good, as a group, but where he alone will work as an individual in his new society that he will soon create. Ayn Rand’s novel puts Equality in a great position to start his new life with his new family. Ayn Rand’s story gives hope to all who want not to be conquered by their government and to have a say in what they believe in. If your government or society doesn’t like what you have to say, then it shows you can also walk right out the door if you don’t like what is happening.

When you become a collectivist, you lose your individuality and almost become a slave and or a robot to the government and society. You lose your creativity and lose your ability to function as a citizen. The novel shows individuality in people and that all people don’t think alike even though they may be told to, you cannot stop a person from thinking what they want to. In conclusion, three quotes discussing individualism, self-confidence, and trust were described more widely and in depth. 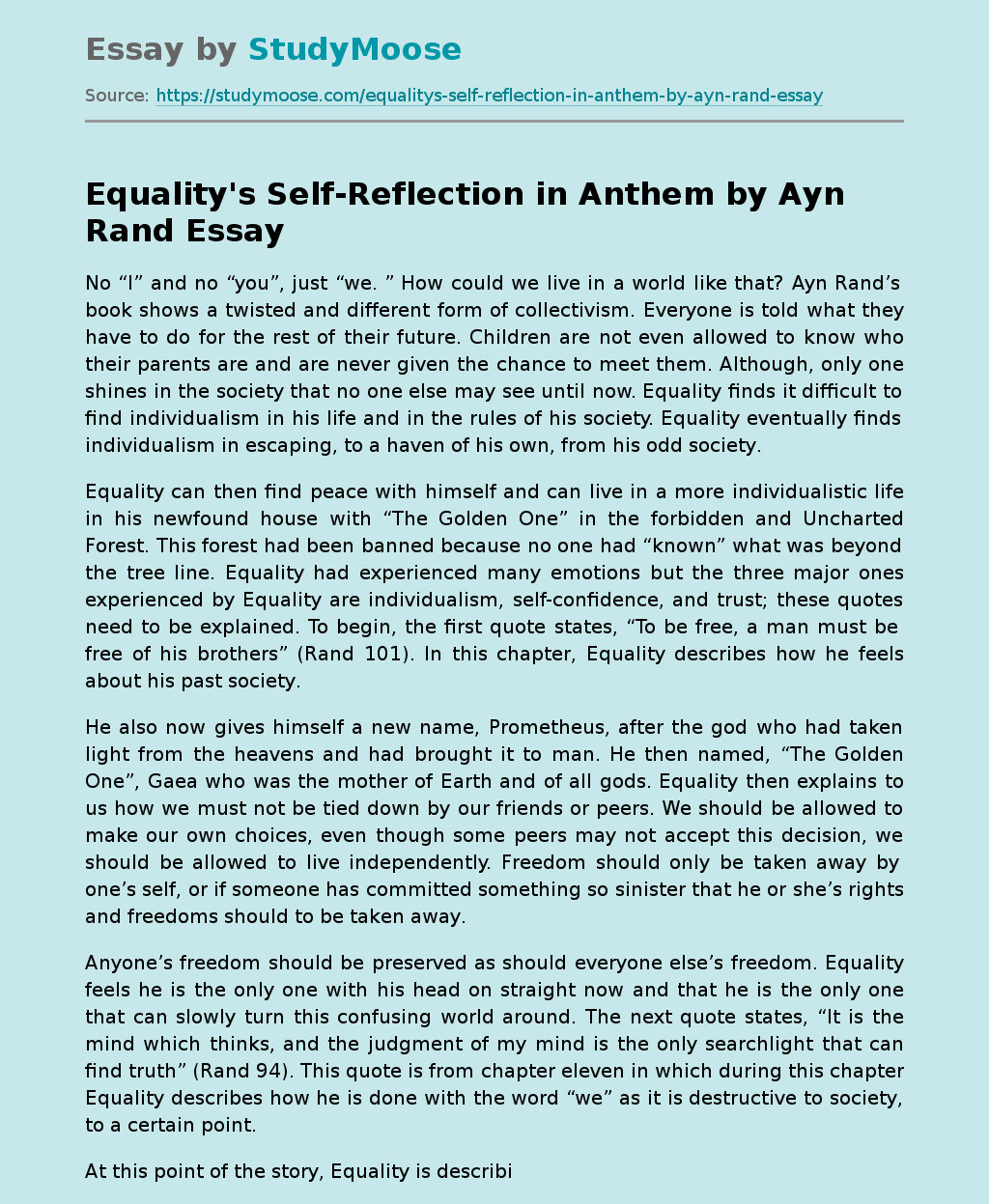