The continued strive towards developing a light-weight and cost-effective components in the aerospace industry has paved way for collaboration of Industry and Academic institutions. To achieve the objective of designing and manufacturing the lightweight and cost-effective landing gear components in an aircraft, a methodology is developed to analyze the components computationally and optimize both dynamic and structural aspects of the landing gear system in an aircraft. The goal of incorporating the methodology is to reduce the weight and check for the ease of manufacturability.

Don't use plagiarized sources. Get your custom essay on
“ Lightweighting in Aerospace Component and System Design ”
Get custom paper
NEW! smart matching with writer

As the global interactions continue to expand, there will be a subsequent raise in demand for aviation as the prime mode of transportation. The International Air Transport Association (IATA) has come up with the figures that the air travelers will increased from 3.8 billion as of 2016 to 7.6 billion by the end of 2035 [1]. The forecast for passenger growth confirms that the biggest demand will be the Asia-Pacific region. China will replace US as the world’s largest aviation market around 2024, while India displaces UK from the third position as shown in the Figure 1.

To meet this requirement, the airline companies must increase the fleets of aircraft. Although these demands incur an increase in air traffic difficulties, it is important to consider the environmental impacts from growing Aviation Industry. To offset these impacts, IATA has set a target of an average improvement of 1.5% in fuel efficiency per year from 2009 to 2020 [1]. The use of lightweight design techniques on aircraft components may be utilized to improve fuel efficiency.

It has been shown that for 10 kilogram of weight savings, 3925 kilograms of fuel and subsequently 4 tons of CO2 can be saved [2].

In response to weight saving incentives, the aerospace industry has taken initiatives in response to the weight saving incentives among various areas to realize these benefits. The weight distribution of a typical aircraft can be categorized into three main parts: total fuel load, total payload, and operating empty weight (OEW) of the aircraft. Within each of these categories lies unique design challenges, which have led to some innovative solutions. Fuel management is vital to ensure aircrafts can reach their destination with a margin of safety in reserves, however it is also important to note that fuel contributes approximately 20% to 30% of a typical commercial aircraft’s maximum takeoff weight (MTOW) [3].

Although the payload contributes the least to the MTOW in most cases, approximately 20%, it still represents an important area for the aerospace industry to optimize [3]. The remaining 50% to 60% of the MTOW is from the OEW of an aircraft and is the main area of focus for introducing weight savings. Since an aircraft is comprised of many different components and subsystems, there is a vast amount of research going into various aspects and parts of aircraft design [4-5]. Though there has been a significant advancement in the aerospace field, there are still good number of components where weight reduction of the same prove to be difficult due to various complexities tied with the system. One such challenge to optimize, arises in the landing gear system of an aircraft.

The literature review has given an overview of design, analysis and optimization techniques which gives an insight to produce a lightweight landing gear component. The topology optimization of lower barrel of NLG considering the impact loading condition and the ease of manufacturability are yet to be addressed.

When an aircraft lands, number of load cases acts on the landing gear components nearly about 300-400 different set of load cases. In the present research work one set of the dynamic load case is considered and research work was carried out. Spin-up an impact loading case is considered where the loads were calculated using the MBD analysis and the dynamic load case was translated to static load by using the ESLM for the optimization purpose.

CAD model of the lower barrel as per the detailed drawings is created using CATIA-V5 and a pre-optimization analysis is carried out in Altair Inspire- Solid thinking software to know the various structural properties of the component.

Formulate the plan for Topology optimization

Topology optimization of the lower barrel is performed in Altair Inspire- Solid thinking software for both objectives minimize the mass and maximum stiffness to validate the best approach. Optimized design of Lower Barrel

On achieving the results from topology optimization an optimized design of the lower barrel is obtained which has ease of producibility.

The purpose of this stage was to give the basis and foundation of which the proposed methodology would build upon. The benefit of the proposed methodology was to develop an efficient and effective computational model of lower barrel with which the baseline design could be analyzed and further re-configured to accept the revised design for comparative analysis. The next step was to define the boundary conditions by considering the worst-case loading scenario. Spin-up is one such scenario where the load acting on the lower barrel is high which is about 30kN.

The detailed drawings of the lower barrel were provided by Textron Aviation and a CAD model was created using CATIA-V5. To establish an accurate baseline for comparison the models were created with exact dimensions and features specified. Drawings and the CAD model is shown in the figure 4.1 and figure 4.2 respectively.

There are nearly 300-400 load cases acting on the landing gear assembly, lower barrel being the critical component where the worst loading scenario acts when an aircraft land. Considering the weight of the aircraft to be approximately 8000kg, the maximum landing weight is approximately 13000kg which creates a reaction force of about 127.489kN on the lower barrel of the MLG. By the time NLG touches the ground the load acting the lower barrel will be reduced and it is quantified to 30kN which is the spin-up case.

The spin-up impact case is considered as the static load for analyzing and optimizing the lower barrel of NLG to confirm the structural stability. The static load of 30kN is acting on the inner surface of the Axle and the other boundary conditions considered for the analysis is shown in the figure 4.3. The boundary conditions are taken into considerations based on the assembly constraints. The pre-optimization static analysis is performed in ANSYS 18.1 software

A pre-optimization analysis of the lower barrel was carried out using the Altair Inspire- Solid thinking software. The load cases were calculated using the MBD analysis where the entire landing gear assembly is considered and different 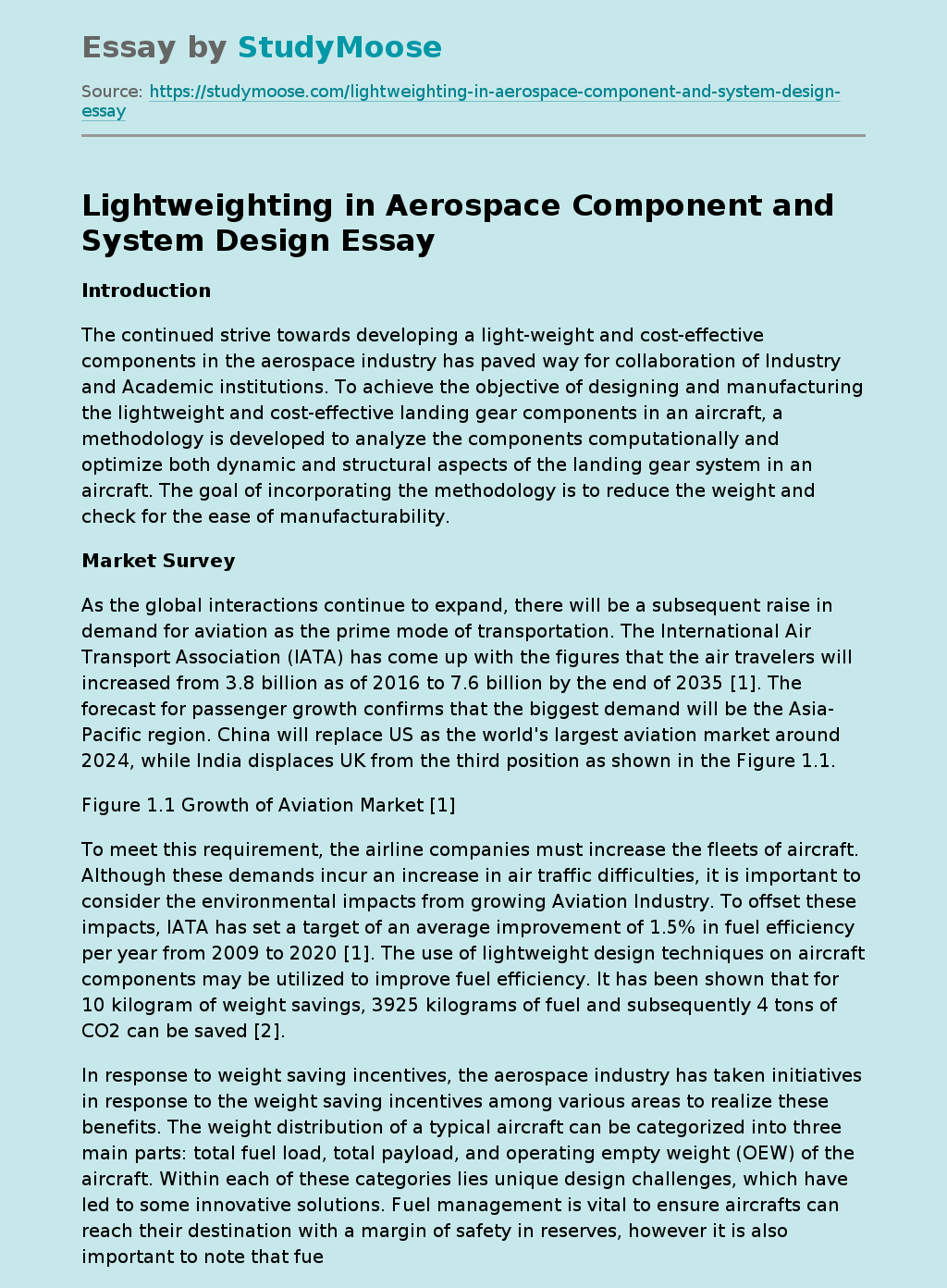