How is life after Pinochet and Chile's military government reflected through the eyes of Paulina Salas in Death and the Maiden?

The play Death and the Maiden, written by Ariel Dorfman in 1990, is one which touches on themes of a harrowing yet important nature. Death and the Maiden introduces us to Paulina Salas, a 40 year old woman who has been left emotionally and psychologically scarred by the torture and rape which she endured whilst held as a political prisoner in an unnamed country. It has been a few years since the demise of the repressive regime, which also remains unnamed, and she lives in an isolated beach house with her husband Gerardo Escobar.

Don't use plagiarized sources. Get your custom essay on
“ How is life after Pinochet and Chile’s military government reflected through the eyes of Paulina Salas in Death and the Maiden? ”
Get custom paper
NEW! smart matching with writer

Paulina never saw her captors but a major breakthrough occurs when a doctor who assisted a stranded Gerardo, Dr Miranda, calls at their beach house.

Indeed, although Paulina never saw the face of her tormentor, she claims to recognise her voice and in order to seek moral justice, holds him captive, despite protestations from her husband. Throughout the play we are never certain of Miranda’s guilt and the ambiguous ending leaves the audience to make their own mind up about the guilt of Dr Miranda.

However, for one to really comprehend the themes of this moralistic drama, one must dissect the mind of the author and explore the roots of the play.

Indeed, though the identity of the country and government is anonymous, perhaps to make the play more accessible to the audience, one only need look at the background of Dorfman to see that this play is a microcosm of Chile under General Augusto Pinochet during 1973-1990.

Life under Pinochet was one which was repressed at any given opportunity under the totalitarian rule of the military junta. Severe human rights violations formed the backbone of the junta until 1990 and left scars of perpetual damage. Therefore, Paulina Salas’ story could probably be seen as one of many, despite the somewhat histrionic search for justice which one sees in the play. Death and the Maiden creates a contrast in Paulina’s and Gerardo’s concepts of justice and for best part of Acts One and Two, is something which is presented to the audience. Gerardo believes that retribution is best left in the hands of the commission which he heads and feels that justice will be served by investigating the human rights abuses and then presenting them to a court. Paulina is however cynical describing the court as being “the same judges who never intervened to save one life in seventeen years of dictatorship”1. Paulina believes that it is her right to take the law into her own hands; a stance which undeniably justified by the fact that she was made to suffer in an inhumane manner. Indeed Gerardo implores her to be reasonable, causing her to retort “You be reasonable. They never did anything to you.”2

Notwithstanding, whilst justice is a theme in the book, revenge is not on Paulina’s mind, so long as Miranda confesses that he did rape and torture her. Indeed Miranda does give a confession though he was disingenuous in his intent as he and Gerardo had together orchestrated a scene of remorse in order to appease Paulina. Though we do not ever know what becomes of the doctor, this scene highlights the unfortunate reality for the people who lived under Pinochet. Whilst the victims will forever live with the scars of oppression and inhumanity, nothing can lead to the full atonement for the sins of the past. Paulina seems to lament this when she is rants at Miranda “And why does it always have to be people like me who have to sacrifice, why are we always the ones who have to make concessions when something has to be conceded,”3.

The memory of life for the Chilean people under such brutality can be relived in the play by a number of ways. What we must ask ourselves, however, is whether Paulina is simply a representation of what the victims went through or does she also represent a land that has been raped, albeit metaphorically. Is she still a prisoner? Indeed Gerardo seems to think so. When pleading with Paulina he tells her “You’re still a prisoner, you’ve stayed there with them, locked in that basement.”4 Are the people of Chile still prisoners? There is no denying the fact that the people of Chile can never forget the hardship which was bestowed upon them and this is something which we come to realise with Paulina in the final scene where the audience witnesses Miranda taking a seat near Paulina and Gerardo. Paulina sees him and looks away. Whilst this is done in defiance rather than fear, not only does it beg question, is Miranda alive or now a figment of Paulina’s imagination, but also shows the fact that Paulina will live with her pain for an undeterminable stretch of time. This is in direct correlation with Chile though the country may seem to have moved forward from such a regime, the people of Chile, especially those directly affected by the human rights abuse, be they victims or relatives of victims will always have a lingering memory of what they went through. Some may choose to march on in their lives in defiance, whilst others may be haunted by their memories.

In spite of the obvious wish to move forward, the transition from a dictatorship to a democracy was one which was shrouded with difficulty. Indeed, Dorfman stated in a 1998 interview with Danny Postel “A great deal of my work has been to figure out what the consequences of the dictatorship have been. We’re still living, during the transition, with the consequences, which are deep.” So it is obvious that Death and the Maiden is an attempt to put the audience in the shoes of not just Paulina but also the people of Chile. It makes them ask themselves how they would be able to deal with this mental scarring which will be a constant hindrance to ones ability to live a “normal” life. It makes the audience think about whether they would be able to make a transition to normality with ease or immense difficulty. This is why the descending of the mirror at the end of Act Three, Scene One.

It makes the audience see what Paulina has been doing whilst seeking justice from Miranda. It shows that she has to face up to her trauma and indeed will probably always live with this. The whole point of Death and the Maiden was to not only be a microcosm of what not only Chile is going through but also what any country, be it Guatemala or Cambodia, which has made or is making the transition from dictatorship to democracy is going through. Indeed Paulina addresses the problems with the transition from dictatorship to democracy, “Isn’t that what this transition is about? … The Commission can investigate the crimes but nobody is punished for them?”5 Death and the Maiden was also quite possibly an attempt by Dorfman who was exiled during Pinochet’s rule to deal with the consequences of having experienced the rule of the junta and indeed to highlight the fact that the search for justice was not one which could be taken with ease. Indeed, Dorfman achieved this through the eyes of Paulina Salas.

How is life after Pinochet and Chile's military government reflected through the eyes of Paulina Salas in Death and the Maiden?. (2020, Jun 02). Retrieved from http://studymoose.com/life-pinochet-chiles-military-government-reflected-eyes-paulina-salas-death-maiden-new-essay 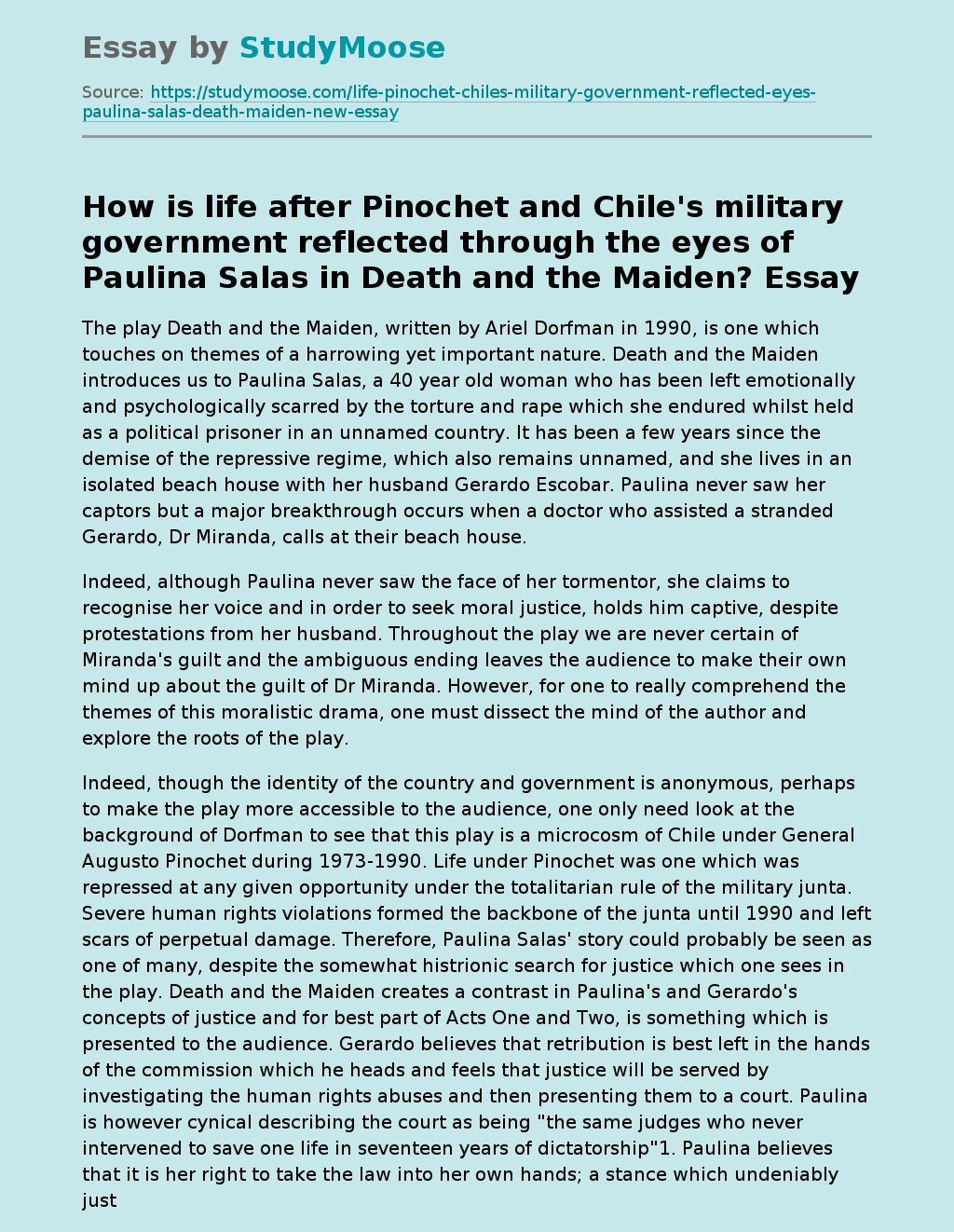