Life of a Military Child

It is often stated that soldiers who fight for our country make several sacrifices. While many have made the ultimate sacrifice, there are many more people who are affected by their service than just themselves. Children that belong to parents that have served or have parents currently serving are forced to overcome many obstacles. Not only are they forced to spend large amounts of time separated from their parent/parents, but they are forced to also move and adjust to unexpected changes frequently with no warning.

Turn in your highest-quality paper
Get a qualified writer to help you with
“ Life of a Military Child ”
Get high-quality paper
NEW! AI matching with writer

Whether it is ever made known or not, when a solider enlists into any branch of the military, their family enlists as well, and just as they make a sacrifice so does their children. They often sacrifice time bonding with their parents, convenience of stability, and sometimes their wants and needs. Children that belong to a parent that have served or parents that are serving are forced to overcome many obstacles. Military children must adjust to a new life when their parents are away.

Sometimes it’s their mother, sometimes it’s their father, but there are many cases where there are both parents away at the same time. The children are separated for various reasons to include their parents going to the field for weeks at a time, and sometimes they are sent overseas on dangerous deployments for up to 15 months at a time. Those children spend a great deal of days and nights worrying and wishing they could see and spend time with their parents.

Soldiers are also sometimes sent on hardship permanent changes of station where they aren’t allowed to take their family members for up to 1 year. Almost daily military children are forced to wake up early and go to bed late because their parents work from 6:30 in the morning to after 5:00 in the evening. Military children are also forced to move around a lot. A soldier can receive orders to relocate within a 3 to 6 month window of reporting. Many times they do not have an option so they can be sent anywhere in the world.

They could go from the east coast to the west coast or even overseas to Germany or Japan. When soldiers receive their PCS (Permanent Change of Station) Orders, the children are usually uprooted, and they may have to frequently adjust to new people and schools. Because these changes can occur every 2 to 3 years, many times the children are greatly affected because they have to make new friends everywhere they go only to possibly leave those friends and lose contact when the next orders are released.

Although military children endure many changes throughout their parents’ time in the service they have many positive attributes because of those constant changes. Most military children are very flexible and adjust very well to change. They are also very well rounded and are usually more outgoing because they meet new people very frequently. What can also sometimes happen however is that they can have separation anxiety and possibly get into more trouble because of the constant changes.

Many times the situation can go either way. It is always up to the parent however to do everything that they possibly can to make the child’s life as comfortable as possible and to keep an open relationship when dealing with the affects of being a military child. Although military children sometimes endure a great amount of transitions they have proven to be very successful in life regardless of their childhoods and they usually look back and appreciate their time spent in many different locations.

Life of a Military Child. (2017, Feb 07). Retrieved from https://studymoose.com/life-of-a-military-child-essay 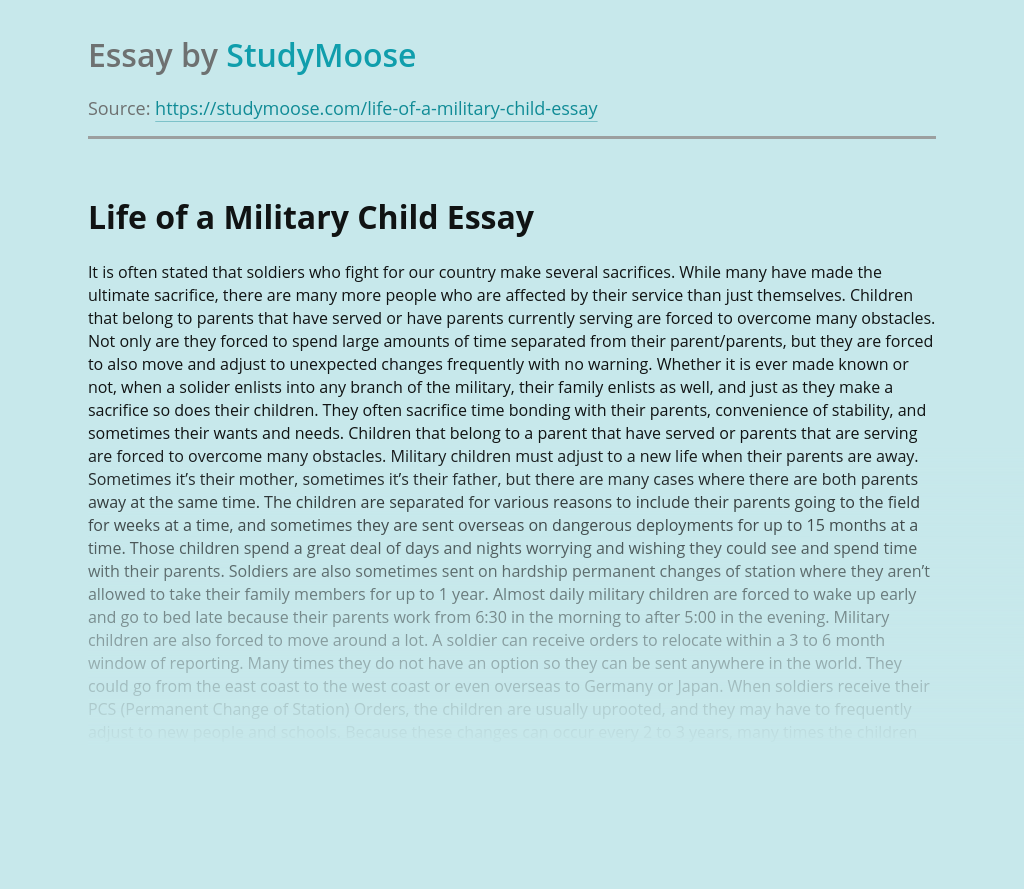 Turn in your highest-quality paper
Get a qualified writer to help you with
“ Life of a Military Child ”
Get high-quality paper
Helping students since 2015
Stay Safe, Stay Original