Letter from a Birmingham Jail by Martin Luther King Jr. mentions the atrocities of racism and describes his endless battles against it. King does this in an effective and logical way. King establishes his position supported by historical and biblical allusions, counterarguments, and the use of rhetorical devices such as ethos, pathos, and logos. With the use of King’s rhetorical devices, he described the ways of the Birmingham community and their beliefs, connected to the reader on an emotional level, and brought to light the overall issues dealing with segregation.

Don't use plagiarized sources. Get your custom essay on
“ Letters from Birmingham Jail ”
Get custom paper
NEW! smart matching with writer

Through the use of ethos, King describes the “status quo” of the city of Birmingham, their beliefs, and the characteristic spirit of Birmingham. The ethos encompasses all the little bits and pieces of segregation because the ethos describes the community as a whole. He says, “Since you have been influenced by the view which argues against ‘outsiders coming in. ’” and “Never again can we afford to live with the narrow, provincial ‘outside agitator’ idea.

This tells how the community thought of black people as “outsiders. The use of ethos benefits King’s stance and position by pointing out the flaws in the “status quo” of Birmingham. In using pathos, King acquired the ability to emotionally connect to the reader and evoke pity. This made for a stronger stance on his part. King even starts his letter with the use of a pathos saying “While confined here in the Birmingham city jail… ” This immediately makes the reader think of the reasons King became incarcerated and of how unjust the reasons were, which made the reader upset and feel bad for King.

More upsetting pathos is used as well, such as “We realized that we were the victims of a broken promise” and “Our hopes had been blasted, and the shadow of deep disappointment settled upon us. ” These become very useful because every single person has had that specific feeling of getting your hopes up only to have them shot down plenty of times before. Any person and every person can connect to that very statement, which became useful tactics to King’s letter. King effectively makes use of logos throughout his letter.

For example, he gives a response to the clergymen’s claim that King’s demonstrations were “unwise and untimely. He also said “Birmingham is probably the most thoroughly segregated city in the United States. ” He states that the black community had no other alternative other than to prepare for direct action. This is just one example of many in which King effectively uses logos. Allusions, another one of the many rhetorical devices King uses, work very effectively in King’s favor. King refers to events in history, quotes historical figures or philosophers, and refers to the bible to convey many of his thoughts and he uses one to describe almost every situation.

King explains why he feels the need to lead these marches by referring to the bible, saying “Just as the prophets of the eighth century B. C. left their villages and carried their ‘Thus saith the Lord,’ I am compelled to carry the gospel of freedom beyond my home town. ” He uses this to describe how no idea is accepted without one leading it and how he is compelled to do so. King quoted the saying “Justice too long delayed is justice denied” to say that they longer they wait to take action, the actions to bring out justice will be denied.

To make an example of how even though something is a law, does not make it just or mean that it should be followed he uses “We should never forget that everything Adolf Hitler did in Germany was ‘legal. ’” The use of allusions allows King to prove his points by mentioning and referring to events or situations that the people already live by. Perhaps the strongest aspect of King’s letter was the counterarguments. By pointing out the opposing arguments by the clergymen, King has the ability to refute those arguments and give a stronger stance or position.

All of the rhetorical devices King uses in his Letter from a Birmingham Jail make his opinion, refuting argument, and overall stance much stronger. The use of ethos, pathos, logos, allusions, and opposing arguments worked greatly in King’s favor. King’s response to the clergymen’s statement provides proof of the unjust situations taking place in Birmingham and also persuades the reader to agree with King’s stance. 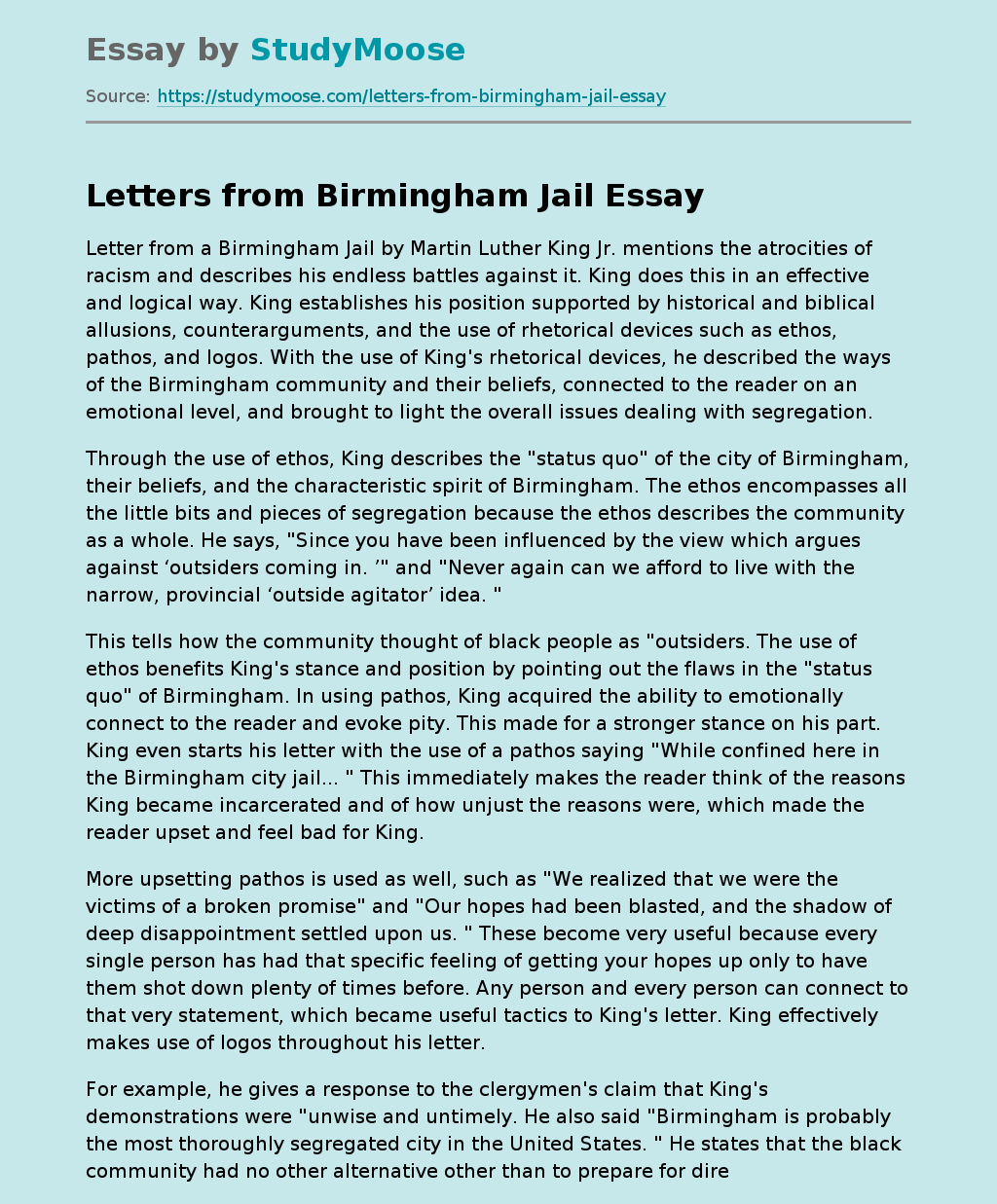