” The repetition of the noun “paws” hints at the significance of the huge and powerful hands which Lennie beholds. “The way a bear drags its paws. ” The verb “drag “emphasises tiredness and powerlessness which reflects Lennie’s uncontrollable strength which leads him to violence but I think the violence that leads is accidental because of Lennie’s desire to pet soft things which his desires which are innocent motivate which him in order for this to happen. Curley’s wife’s death is foreshadowed by Lennie’s obsession with soft things.

All the living things that Lennie pets have resulted in the death of them such as mice and the puppy. This gives the reader the impression that Curley’s wife could end up meeting death whilst the unaware Lennie. This is a perfect example to show how innocent one’s desires can lead to such catastrophic events. In-comparison, George realises the difficulty of making his dream come true to share with Lennie.

On one hand he wants to be independent but there is Lennie whom we know has a disability which George has ultimately taken responsibility for only his life but also his death.

However George’s dream of owning a farm which he desires and shares with Lennie who desires to pet soft things. Which for George, the dream of the farm parallels the security for Lennie. As George is torn between looking after Lennie and achieving his dream. If he chooses his dream, Lennie would be left to suffer which George cannot do as Lennie is his fellow companion.

However if he chooses Lennie then he will have to face the harsh reality of not achieving his dream and work as a migrant worker for the rest of his life.

But as we know George kills Lennie at the end. Without Lennie, George relinquishes his hope for a different life. Lennie was the only thing that distinguished his life from the lives of other men and gave him a special sense of purpose. With Lennie gone, his hopes cannot be sustained. The grim note on which the story closes on where George and Lennie’s dream first began and ended suggests that dreams have no place in a world filled with such injustice and adversity. As Steinbeck explores the theme of fate and powerlessness.

As Destiny cannot be controlled or changed to suit the needs of motivate a person. Through Crooks, Steinbeck exposes the bitterness, the anger, and the helplessness of the black American who struggles to be recognized as a human being, let alone have a place of his own due to his coloured background. With Crooks Steinbeck constantly explores how the theme of isolation and limitations of dreams has affected in him being miserable and self-defenceless. Crooks desires a companion as he is aware that this once was a reality. “The white kids came to play at our place.

” Steinbeck uses the verb “play” which insinuates unlimited happiness and joy. As the phrase “white kids” suggests there was no discrimination; which Steinbeck explores the theme of innocence. In-addition this is also implies how Crooks childhood was content contrariety to the current situation which is serious suggests how Crook’s present is very different in contrast to his childhood. Now he has become isolated and insecure because he is black man who is segregated-for this reason Steinbeck wants the reader to feel sympathy for him.

As any black person would be separated from the white society, where the black person would be left alone to suffer and whereas the white society could do anything they want which was very communal at the time of the “American Depression”. Crooks is in conflict (whether he wants a companion or not) and Steinbeck uses irony to express this. On one hand, it shows that Crooks desires a companion. “Book ain’t no good, a guy needs someone to be near him. ” The noun “needs” implies the need of human interaction, need of company and security. Which suggests his books are just an object and cannot be compared with human communication.

Steinbeck portrays him like this, to shows the reader how Crooks is actually lone and is isolated from the world, as it shows he desires freedom. A black person being discriminated was very common at this time. On the other hand, when Lennie comes into Crook’s room he suddenly becomes uncivil and defensive as he imagines a big guy like Lennie could cause trouble for him; here the theme of prejudice is explored. “I ain’t wanted in the bunkhouse, and you ain’t wanted in my room. ” Steinbeck uses the repetition of “ain’t wanted” emphasises the rejection that Crooks feels.

This phrase also implies that Crook’s wants Lennie to feel empathy-feel his pain of isolation and segregation. The use of pronouns “I” and “you” reflects the separation between Crook’s and the other ranch workers. Crook’s coloured background not only reflects him not having a companion but his dreams and desires are also limited because Crook’s has no rights to what so ever or even speak out loud to express his inner feelings and even if he did he would be punished because he is black, in the society he resides in is racist. Which Black people had to be separate or stay away from the white society.

As the white society were treaded better than the black society which the black society suffered from greatly. As this was very common at the time of the American Depression. However Crooks is optimistic that his dreams will come true, Steinbeck uses the phrase “it’s just in their heads” to indicate the frustration Crook’s feels because he knows that he will never be able to achieve his dreams because of his colour, as nobody would listen to him as the same thing would happen to any other black person at that time as they would be segregated from the white people.

Furthermore Crook’s has a negative view of others ambitions too. The noun “head” implies imagination and something extremely difficult to gain; relating to the American Dream. Steinbeck presents Crooks this way to the reader, so it illustrates a picture in the readers mind on how black people were despaired of achieving their dreams and desires. As this is a perfect example of how obstacles have come in the path from a person not achieving their dreams and desires.

When Crooks sees his opportunity to be part of the dream with George and Lennie he becomes a different person. The prospect of friendship and companionship allows him to make the initial attempt to bridge the gap between black and white. The way in which he asks suggests he is feeling extremely awkward in doing so. “I’d come an’ lend a hand”. I felt that this was a very brave thing to do considering the racial tension in society at that time. Therefore the dream for companionship must have been really important to him.

As If the dream were to succeed it would put an end to his misery and he would be able to live properly and be treated equally. However I feel that this quote also conveys a message from Crook’s angle of perspective that we are powerless to control our destiny. As Crooks has this dream to put an end to his seclusion. I think that Steinbeck portrays Crooks in this manner to the reader, so the reader understands how important a dream or a desire is for an individual which brings hope and prosperity to one’s life. 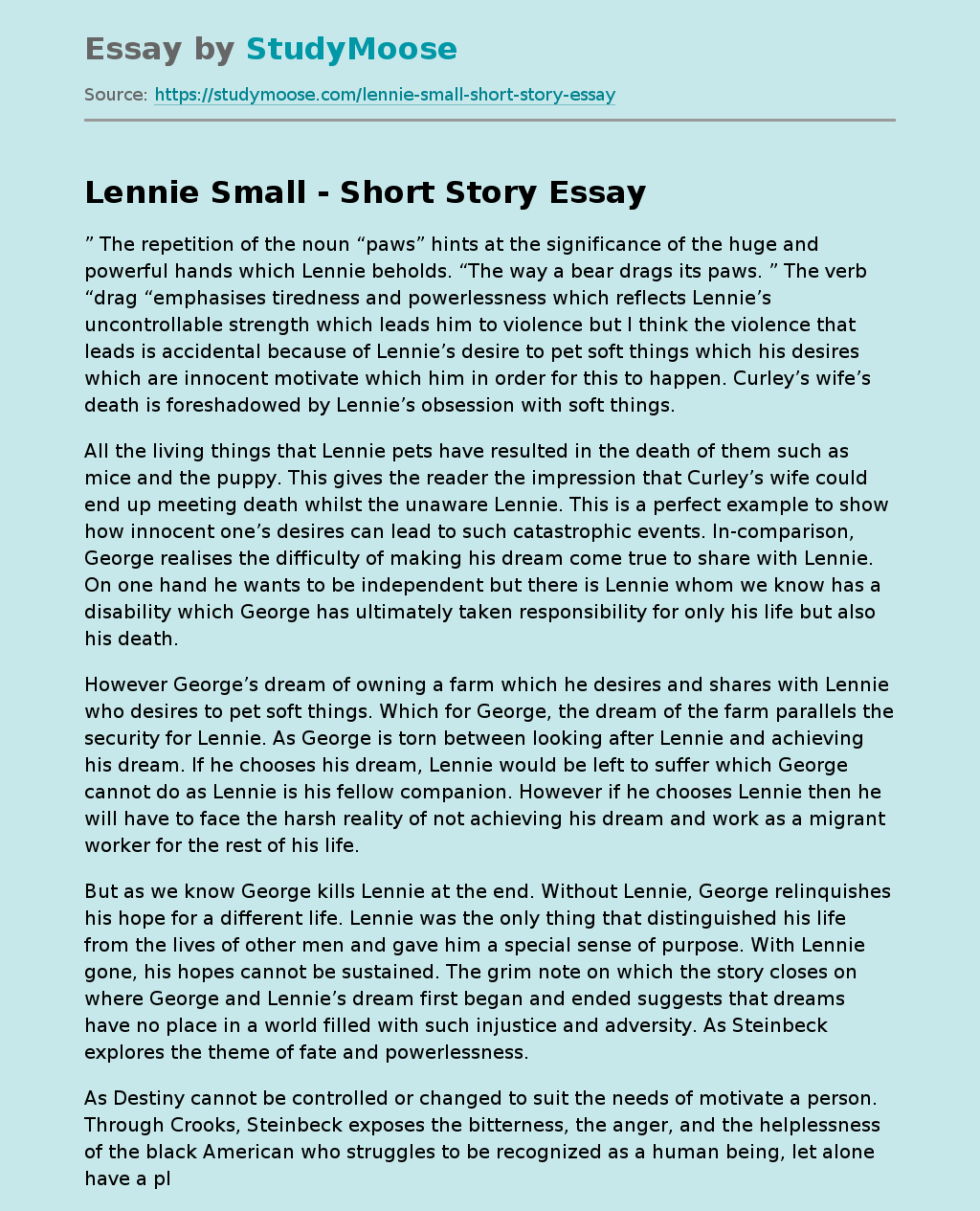