Another explanation of attachment is evolutionary, which looks towards survival benefit of having a strong bond between caregiver and infant. It suggests that there are instinctual or natural attitudes and behaviours which are hard-wired into both the caregiver and infant. These behaviours and attitudes occur naturally, unless there is something preventing their occurrence. Research with animals – Konrad Lorenz (1935) and Harry Harlow (1962) suggests that interaction is more important than food in the formation of attachments.

Lorenz did a theory of imprinting on geese.

Don't use plagiarized sources. Get your custom essay on
“ The Learning Theory explanation and the Evolutionary explanation ”
Get custom paper
NEW! smart matching with writer

The theory says that animals have an innate ability to recognise their caregiver – this allows them to learn important behaviours. Imprinting must occur within a certain time called a critical period or it will not happen at all. Harlow carried out a study on monkeys. Harlow concluded that monkeys need physical contact with a living caring mother to develop normal social skills. Perhaps the most influential explanation of attachment was presented by John Bowlby who carried the research with humans in 1940s.

Bowlby suggested that social releasers are signals from the child identifying the need for food, protection and closeness. Bowlby’s notion of monotropy suggests that infants have an innate tendency to become attached to one individual. According to Bowlby’s theory, the infant may make a number of attachments but this single attachment has qualitative differences from any others. Bowlby also thought that these attachments form a template for the development of future relationships. However, the research evidence to support this is rather weak.

In Bowlby’s theory of attachment in humans there are two hypotheses.

The continuity hypothesis states that consistent, sensitive and responsive care early on will show themselves later in life. The secure-base hypothesis states that if children feel suitably comforted by the presence of a caregiver then they are likely to explore their environment, encouraging development. Bowlby suggested that attachment develops in a fixed sequence. The first stage in the sequence is signals from an infant like crying which are not directed at anyone in particular, however, there is a preference for the company of people.

The second stage is where by three months of age infants are familiar with the usual caregivers and will direct signals only towards them. The third and the last stage is where by about six months signalling is focused primarily on the more important caregiver. Michael Rutter has strongly criticised Bowlby’s concept of monotropy. He claims that infants often show multiple attachments and often the primary attachment is to someone other than the mother and can be male. Bowlby did, however, agree that infants can form multiple attachments; nevertheless, Bowlby was adamant that the most important attachment is with the mother. 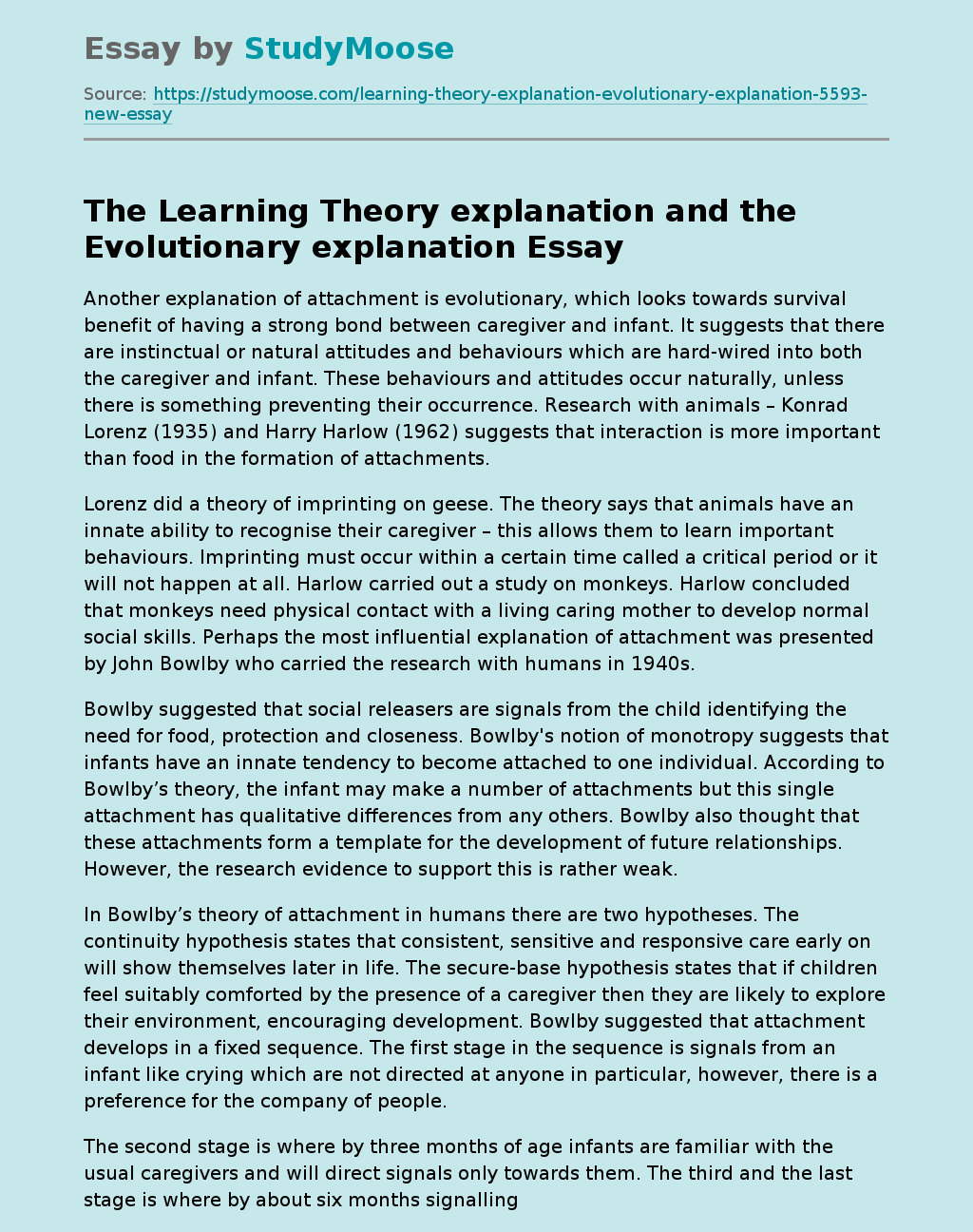