Law Abiding Citizen is a 2009 action film. It’s main characters are portrayed by 2 of today’s most prominent stars Gerard Butler and Jamie Foxx . Set in 1999 in Philadelphia, Pennsylvania, this movie tells the story of an honest working father and husband turned killer in search for revenge when his life is suddenly and drastically changed overnight. This was an excellent film, in my opinion. The movie had much to say about real-life legal issues. It opens the eyes of many to our not so justice justice system.

It shed some light on situations that happen in America quite often; the bad guy is let off too easy. Clyde Shelton, played by Gerard Butler, is an upstanding husband and father whose wife and daughter were brutally raped and murdered in front of him during a break in. When the suspects were caught, well known district attorney Nick Rice, portrayed by Jamie Foxx, was assigned to the case. Due to a flaw in the system, Nick is forced to offer one of the suspects a much lighter sentence in exchange for testifying against his accomplice.

Ten years after this the suspect who was let off easy is found dead and Clyde Shelton coolly and calmly admits his guilt. He then Sent out a warning to Nick saying either Nick fixes the flawed justice system that failed him and his family, or every single key players in the trial would die.

Clyde, the once family man, had turned into a brilliant sociopath. Once behind bars he wasted no time following up on his threats.

He began orchestrating a number of diabolical and well thought out murders that law enforcement could not predict nor prevent from occurring, all from behind the walls of a jail cell. The only person that can stop Clyde’s string of killings is Nick Rice and in order to do so he must outsmart this brilliant sociopath. As his methods are uncovered it become apparent that Clyde is a very clever man with remarkable resources. The tables turn when Clyde gain access and threats to kill Nick’s family. He then finds himself in a desperate race against time to stop this once upstanding citizen. The acting is this movie was flawless. But nothing less would be expected from the big stars featured in the film. The casting director was a genius. The actors in this film brought the story to life and made it believable. It was incredibly suspenseful and kept me on my toes. Gerard Butler did an amazing job at getting viewers to sympathize for the sociopathic character he portrayed. Its not easy getting people to like the bad guy.

Even the supporting roles were played by some of the great actors of today like Regina Hall and Viola Davis. The music in the film serves several purposes that are both important on the emotional side of the movie and also enhances the storyline.The music in a film is used to represent the emotion of the scenes. The background music was one of the major components to this movie’s suspense. The right music was played at the right time. An example of this would be Engine No. 9″ by Deftones which was played on Clyde’s iPod while he is eating his steak in his cell. This movie brought another element to the movie. It changed the mood of the scene to match what was going on at the time in the film. Even the orchestrated music in the background of the scenes intensifies the suspense of the scenes.

Overall the film was well worth my time. It was full of action and suspense. The quality of the film, to me, was superb. Everything from the acting, set, music, to the script, and the costumes were spot on. This movie opened my eyes to some of the things our justice system needs to greatly improve on. I enjoyed the well thought out storyline and how everything unfolded. It kept my attention and kept me eager to see what would happen next. As crazy as it is to think, situations where murders and rapers get light sentences and minor time for crimes bearing life sentences happen more frequently in our country than we may believe. It just goes to show that there are flaws in the system that can potentially do more harm than help. I would recommend this movie for other potential viewers. It is a nail-biting thriller that everyone just see at least once. 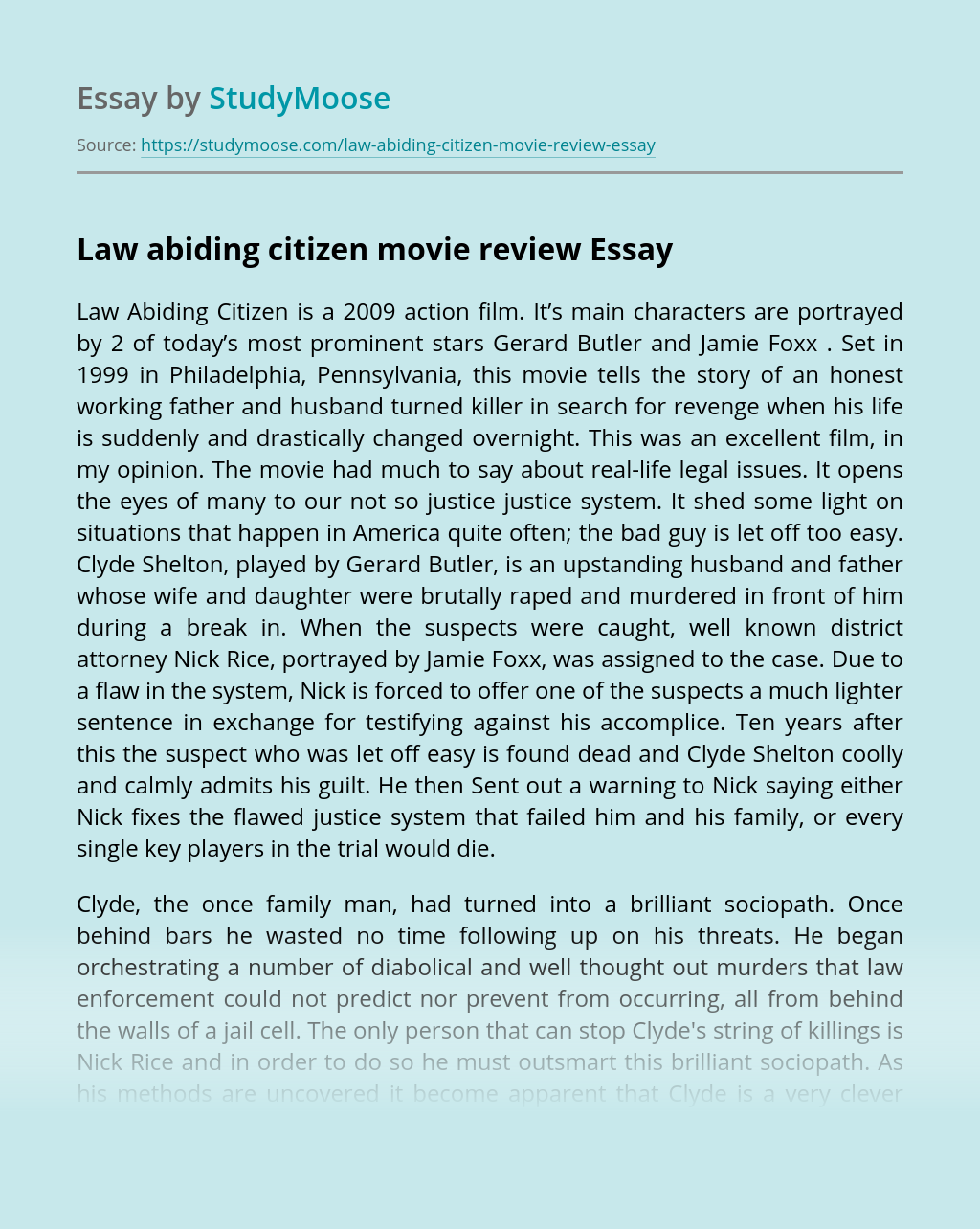