My Roles and Responsibilities as a Global Citizen

Scholars say that the concept of globalization is inevitable and will subsist because people of the world are becoming increasingly capitalistic and the advancement of technology is rapidly breaking down all state barriers. Although capitalism and technology may be viewed in a negative light, there are still positive implications to the concept of globalization that should not be ignored. These positive implications further highlight my responsibility as a citizen of the world.

This role as a citizen in the global scale is directed towards my personal effort to impart equality within everyone in my every endeavor, to support cultural convergence in every way possible, to aid the suffering of humanity in different parts of the world, and to alleviate the destruction of the environment.

Don't use plagiarized sources. Get your custom essay on
“ My Roles and Responsibilities as a Global Citizen ”
Get custom paper
NEW! smart matching with writer

These beliefs are rooted from my realization that there are greater fulfillments in taking part of an effort which has no cultural, societal, political, or economic divisions. There have been visible efforts by different individuals and organizations in resolving the problems of the world.

The United Nations, for instance, have been absolute in its efforts to protect human rights and facilitate global development. However, in the case of individuals, I advocate utilizing ones skills to effect universal change. My vision of being a global citizen is defined by making use of my education to further utilize the resources of the world, thereafter enabling myself to advocate the eradication of international inequality, the convergence of different cultures, the alleviation of suffering, and the protection of the environment. Inequality has been controversial in so many periods within the world’s history.

We hear genocide, religious conflicts, wars, and terrorisms just about everywhere. If we try go deeper to the roots of all these conflicts we will get to understand that inequality has played a major role in igniting all these conflicts. World War I and World War II, for instance, took place because state actors believed that balance of power was compromised. Also the most prominent conflict of the current decade, the September 11 Terrorist Attack, is thought to be an angry response of a group towards the dominance of the United States.

All these were considered to be caused by the inevitability of globalization which is unraveling the seemingly unequal status of different cultures. ` Another issue that humanity is currently facing is discrimination. Oftentimes we hear clamor for equal treatment and just opportunities. Separation of ones culture to another has been prominent and it is causing further damages due to the emergence of globalization. A freer world only opens up a wider door for problems of discrimination to occur.

The more globalization becomes present in the society, the more identifiable the differences turn out to be. This causes partitions, thus creating the conflict of discrimination. Also, the growing distress on climate change is considered to be caused by human activities within every part of the world. Also, globalization and its take on the advancement of technology is considered to be causing the rise of temperature. The sole responsibility of mankind is to put an effort towards the protection of our environment.

This, however, cannot be pushed forth through disjointed efforts. The world needs to converge and create a unified response to this environmental dilemma. I do believe however, that the inevitability of globalization and its destructive repercussions can only be countered by the efforts of the human race to face globalization and to identify themselves to the current circumstances. This means that individuals should recognize the importance of being a citizen of the world, more than their responsibilities to their own nationality.

It is only through understanding and respecting the differences of cultures that world peace can be achieved. This is the exact reason why it is important for me to ensure myself that I make use of my education as a tool that would provide an opportunity to participate in the alleviation of the problems of the world and to impart awareness to everyone regarding their responsibilities of being a global citizen and the privileges entailed to it.

My Roles and Responsibilities as a Global Citizen. (2016, Nov 26). Retrieved from https://studymoose.com/my-roles-and-responsibilities-as-a-global-citizen-essay 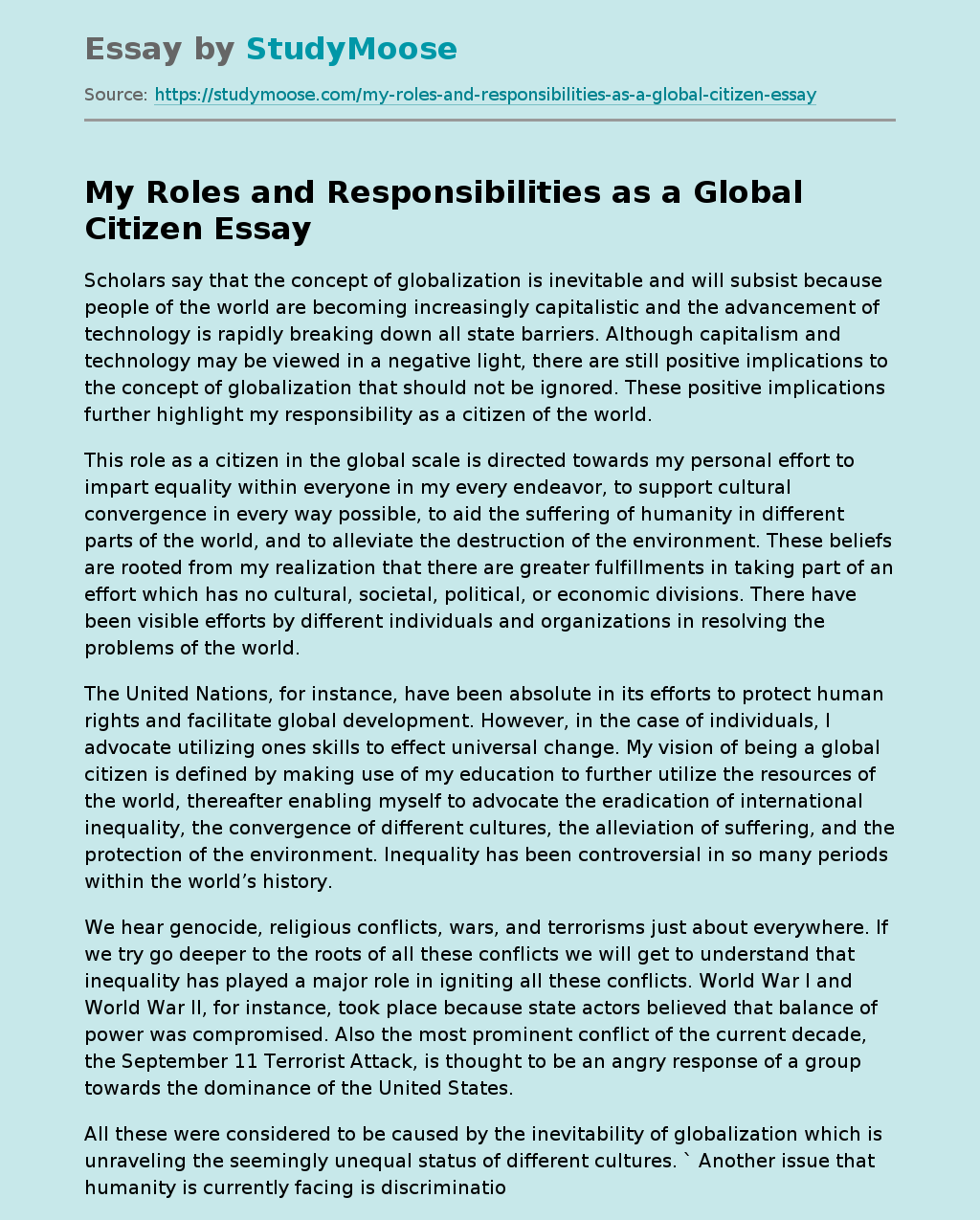