The Analysis of Unknown Citizen

“The Unknown Citizen” seems to describe story about the Unknown Soldier, a term used to recognize people whose bodies are found after a battle but cannot be identified. This poem begins by the word “He was found by the Bureau of Statistics…” It is describing a person referred to as, simply, “He.” We take this to be “The Unknown Citizen,” which makes sense because his name isn’t known, the ordinary average citizen in the modern industrialized urban society who has no individuality and identity.

Don't use plagiarized sources. Get your custom essay on
“ The Analysis of Unknown Citizen ”
Get custom paper
NEW! smart matching with writer

The concept of this poem suggests that the lives of many normal people are so conventional and uneventful that they might as well be unknown or anonymous.

There is a message that the writer wants to be told to the readers, it is “ you don’t want to end up like the Unknown Citizen”. In the final of the poem, the writer asks two questions, they are “Was he free? Was he happy?”. By asking these questions, the poet is drawing our attention to the question of freedom and happiness.

It’s interesting that these two questions are referred to in the singular, as “the question,” as if being free and being happy were the same thing.

“The Unknown Citizen” uses the old-fashion style, eventhough it is written in modern era. The writer, Auden, is known as a master of of the rhyming couplet (AA, BB), the simplest rhyme scheme in English. Auden is considered a “modernist” writer, but his work is unlike that of any other poet of the past century.

The Unknown Citizen deserves a central place in our nation’s capital, considering all his huge accomplishments like having five kids. It will be right down the street from the Bureau of Statistics, a huge, drab marble building.

The Analysis of Unknown Citizen. (2016, Oct 04). Retrieved from http://studymoose.com/the-analysis-of-unknown-citizen-essay 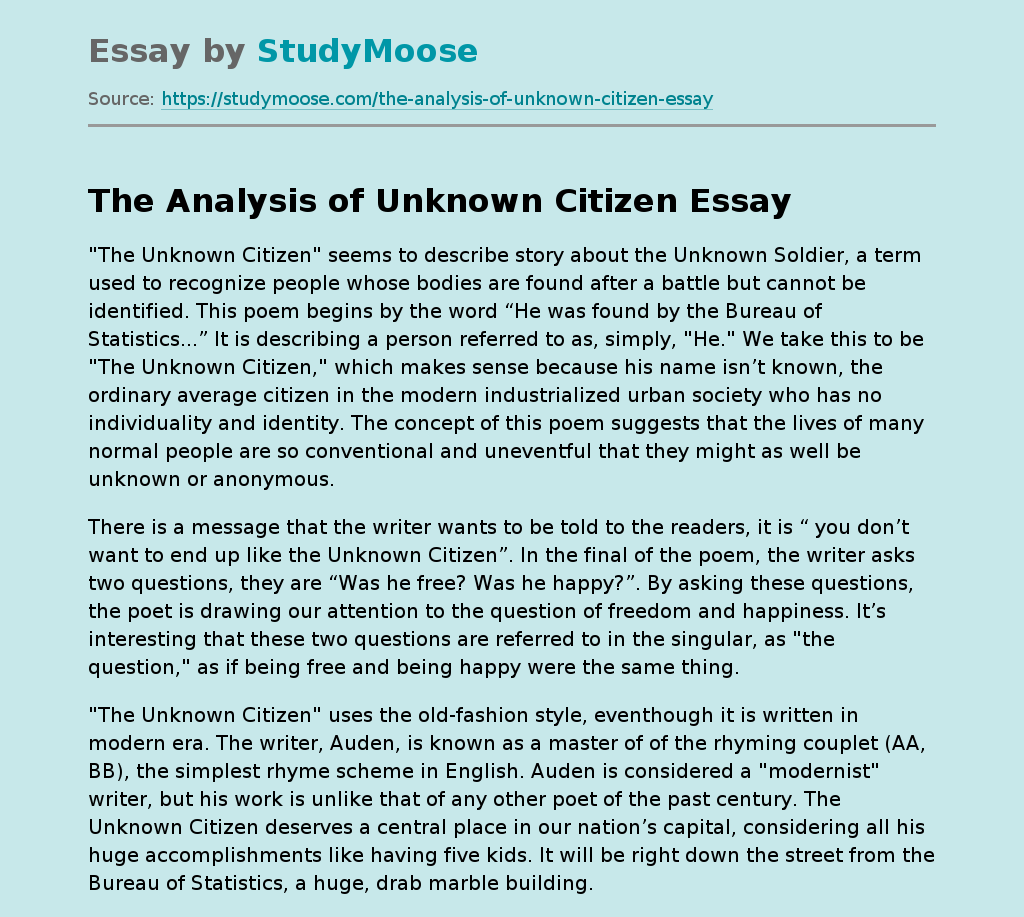