One’s culture affects almost all of one’s communication behaviors. I discovered an article written by Margaret Cote, “Language Reflects Culture,” that reveals many of the differences between the Saulteaux language and the English language. Margaret Cote states, “Language determines the way a person views the world. ” She describes how Indian people view things around them differently then English speaking people do. Margaret Cote says that she views the world around her in two different ways depending on what language she is speaking.

Don't use plagiarized sources.
Get Your Custom Essay on Language and Culture Just from $13,9/Page

In this paper I will discuss how attitudes and behavior are determined by the language one speaks and how language does indeed reflect a culture. One’s culture determines the way one processes information and how one copes with reality. Concepts and objects have frames of reference that differ from culture to culture. The meaning of a word partly depends on the culture’s historical relation to the concept or object described. When Margaret Cope returns home the topic of the conversation determines the language she speaks.

Different cultures see the world differently. The Saulteaux people are extremely concerned with exactness and have different words for we and you, depending on whether they are being inclusive or exclusive. American culture is not as concerned with exactness and therefore we use the words we and you differently. Different cultures have different beliefs and values and these are expressed in their language, whether it be verbal or non-verbal. Many misunderstandings occur in intercultural communications because many are unaware of these differences.

It is important for one to learn the differences of various cultures for one to understand one’s own identity. It is through knowing about others that one learns what is truly important to oneself. Language Reflects a Culture Languages group aspects of reality together. Things that are important to a culture have many groups and words for those things. Things that are insignificant have fewer groups and words. For example, there are many different words for car in the English language, because cars are very important to us.

In the Saulteaux language there are many words for snow, because snow is an important factor for them. Both verbal and non-verbal communication reflects whether or not a culture values individualism or collectivism. Individualistic cultures value self-expression, speak out to solve problems and are confrontational when dealing with interpersonal problems. In collectivist cultures people have unconditional loyalty to the group and use avoidance, and face-saving techniques to solve problems (Hybels, S. & Weaver, R. (2007). P. 64).

Culture determines one’s long-term or short-term orientation. In cultures with long-term orientation people value tradition, persistence, relationships by status, and having a sense of shame. In cultures with short-term orientation people do not value tradition as much because it tends to prevent innovation, nor do they have the same sense of shame or need to save face (p. 65). Communication between different cultures can be difficult. Many individuals either lack knowledge of other cultures or are just naive when it comes to dealing with individuals from other cultures.

There are many barriers to intercultural communication, including ethnocentrism, stereotyping, prejudice, and discrimination. Ethnocentrism is when one believes one’s own cultural norms and ways of thinking are superior to all other cultures. Ethnocentrism becomes a barrier to intercultural communication when one refuses to believe that another culture’s beliefs have any real value. It prevents one from seeing another’s point of view and greatly hampers empathy (p. 66). Stereotyping is oversimplifying or distorting views of another culture.

Stereotypes categorize and generalize the information we receive daily. The problem with stereotypes is once they are established they are difficult to remove. Individuals tend to view things that fit the stereotype rather than see things that dispute them. This can be a barrier to intercultural communication because if one believes a negative stereotype about a certain culture they are much less likely to empathize with them (p. 66). Prejudice is a negative attitude toward a cultural group. These attitudes are usually based on little or no experience.

When one has prejudice feelings towards another cultural group they do not like them because of some unseen or unproven fact. This greatly hampers intercultural communication because when one has a prejudice they form an opinion about a person before they even get to know them. Stereotypes often lead to prejudice. Getting to know individuals from different cultures assists one in eliminating prejudice (p. 67). Discrimination takes stereotypes and prejudice one step further by excluding, avoiding, and distancing oneself from other cultural groups.

Discrimination is a barrier to intercultural communication because it does not allow interaction between different cultural groups. When one does not experience interactions with other cultural groups they are unable to learn about different beliefs and values. In closing, language is a pattern that ascertains the shape our thoughts and experiences take. One’s culture affects almost all of one’s communication behaviors. It determines how one views the world. The words and actions of individuals are determined by one’s culture.

Communication behaviors are mostly learned when one is young by imitating those around one. Culture affects one’s attitudes and behaviors, and it reflects exactly what is most important to the people of that culture. Learning about different cultures can assist one when having intercultural communications. When we open our minds and hearts we are much less likely to stereotype, be prejudice against, or to discriminate against individuals that are different then ourselves. Being open and accepting of others makes intercultural communications a rewarding experience. 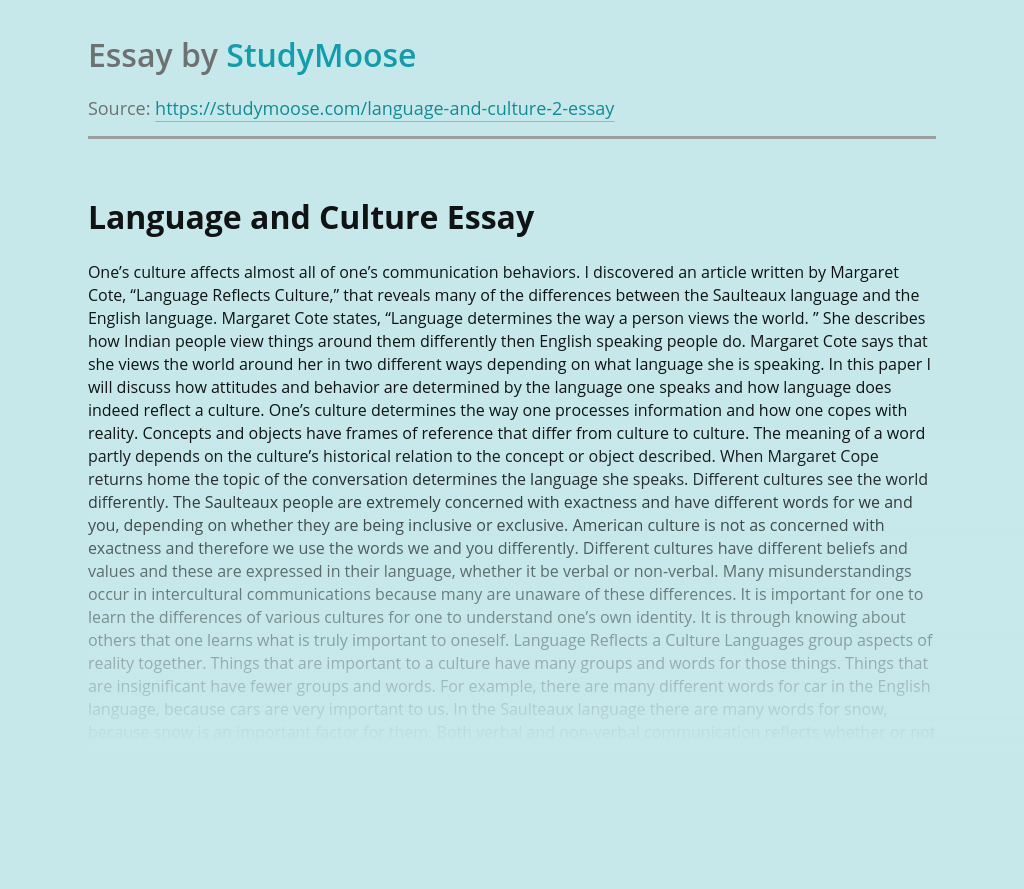 Deforestation is a severe environmental destruction which cannot be revived easily if changed at current rate. Therefore, I totally agree that deforestation causes a lot of environmental problems. Deforestation includes the cutting down, burning and destructing of forests. The deforestation affects the ecosystem and disrupts the oxygen and carbon oxide cycle. People have an impression...

1. Introduction Sports Tourism is defined as a specific travel outside of the usual environment for either passive or active involvement in competitive sport and international sports tournament where sport is the prime motivational reason for travel and the touristic or leisure element may act to reinforce the overall experience. Another definition worth noting explains...

View sample
Get Essay
The Eternal Problems in Romeo and Juliet

The fable used by Shakespeare was used more than once in the ancient literature. This is the love of two young people from hostile families. It is used by William Shakespeare, not only in “Romeo and Juliet,” but also in the play Midsummer Night’s Dream (the ancient story of Piram and Fisby in Metamorphoses by...

View sample
How to Be a Successful Student

To be a successful student in my new education pursuit, i have to possess this following characteristics and qualities. I have to be actively involved in my studies and responsibility for my education, by participating in class and doing my home working and summiting it on time before the deadline date. To go in to...

The purpose of this paper is to identify and describe the emerging business logistics strategies which have emerged in the market place over the last few decades and will remain dominant well into the better half of twenty first century. Analysis through this work will argue that the two strategic concepts, namely supply chain integration...