Hi. Today i am going to be talking to you about knife crime and how it affects our society. Lately in the news Jay Whiston a 17 year old boy was fatally stabbed innocently outside a house party. Such a waste of a life for a young boy that had his whole future ahead of him. Knife crime has increased over the past couple of years due to the amount of gang violence going on. While the large majority of young people follow the law a small number of people do find themselves getting involved in knife crime.

Don't use plagiarized sources. Get your custom essay on
“ Knife Crime Essay ”
Get custom paper
NEW! smart matching with writer

The few reasons that teenagers may get involved with knife crime are because of family problems, at school where they are influenced by someone who is involved in gangs. Some teenagers just want to fit in, so they join gangs and hang around with trouble makers, and some teenagers think that by killing someone and having a knife gives them power. However carrying a knife is illegal in the UK and the courts will take firm action if you are found with one.

Some people may say they carry a knife around for different reasons such as:

As you may know not all people who carry weapons intend to use them. But if you are carrying a weapon and get into an argument, the situation is more likely to get out of hand and you are more likely to be provoked/stupid enough to use it.

You could seriously injure someone or someone could use your weapon to seriously injure you. Police have the power to stop you and search you if they believe that you are carrying a weapon. So this is your choice whether you plan to use it or not, you could end up in a lot of trouble and the consequences would be serious.

Knife crime can affect anyone, not just people in gangs. This could affect: * Innocent people that get caught in the middle of other people’s rows/arguments and could suffer with serious injuries or worse. * Police officers that could be trying to sort a situation out. * The community because they wouldn’t want to leave their houses knowing that there is knife crime going on and they could get stabbed. * Children that are growing up, as they may be influenced by older people and may think it is cool. Remember that an injury may look small, but any inside damage can kill.

Carrying a weapon in school does not mean that the school is only involved; the police will also be involved. These are some of the consequences for anyone who is found carrying a knife:

•It is illegal to carry a knife or a gun, even a fake one. •If you are caught with a knife or a gun whether you say it was for your own protection or you were carrying it for someone else, you will be arrested there and then. •Control of a knife can carry a prison sentence of up to 4 years even if it’s not used. •If you stab somebody and they die, you will face a life sentence and you will be in prison for minimum prison sentence of 25 years.

Remember that the law is clear. If you choose to carry a weapon, you are putting your future in danger. If you don’t take it with you, it won’t be used. 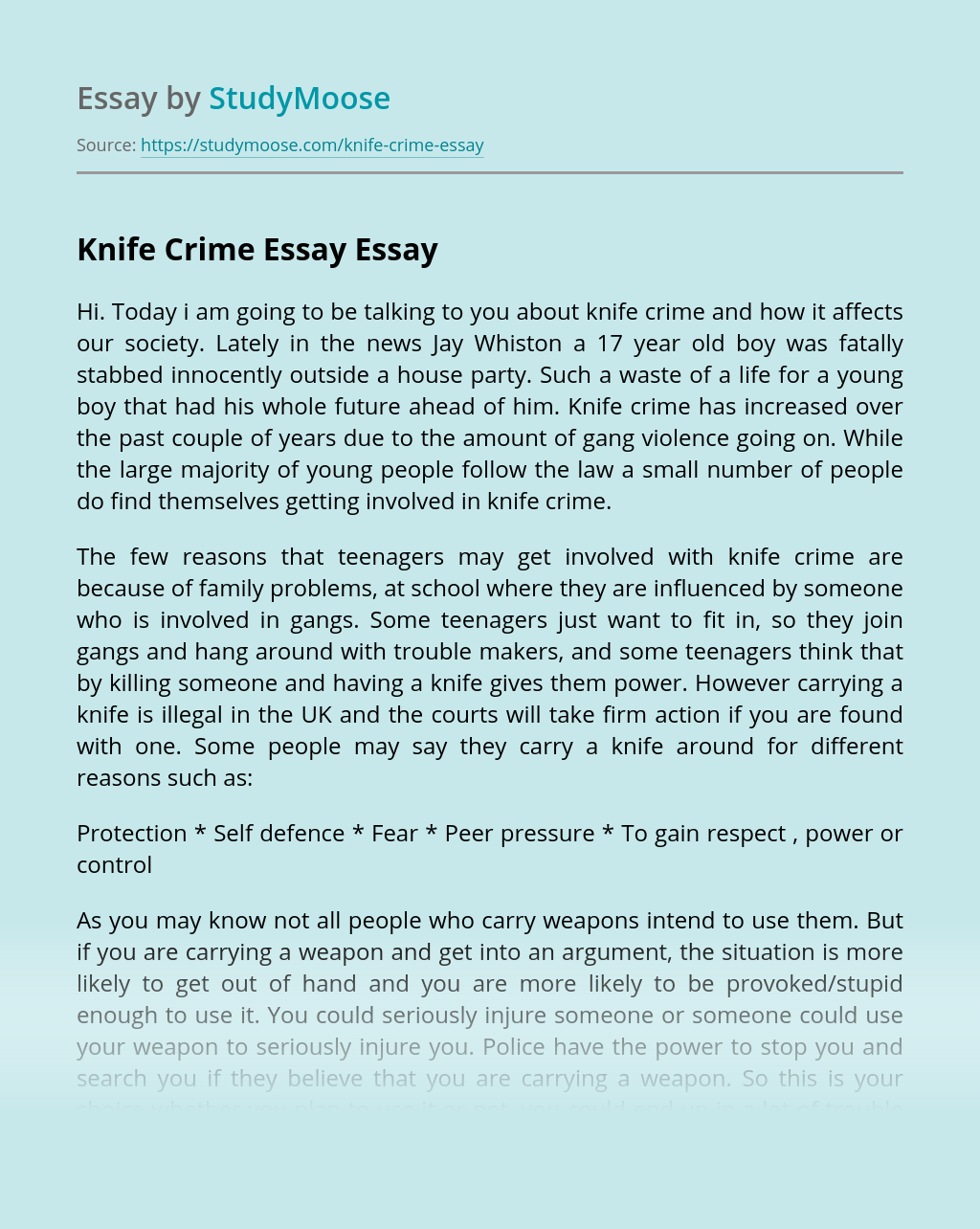