Kitty Genovese was an ordinary woman. One day, she was going home in the early morning. When she arrived in her neighborhood at about 3:15 a. m. and parked her car about 100 feet from her apartment’s door, she was attacked by someone. She screamed out. Even though her screams were heard by several neighbors, nobody helped her. She was seriously injured, but the witnesses did not believe she was in need of help. There were several people that heard her screams but nobody went out to help her.

Turn in your highest-quality paper
Get a qualified writer to help you with
“ Catherine Susan Genovese ”
Get high-quality paper
NEW! AI matching with writers

Kitty Genovese’s murder is a dilemma.

If human beings are basically benevolent, why did thirty eight ordinary people do nothing when they heard Genovese’s cries for help? Her murder case involved deeply rooted psychological and sociological issues This incident shows that human behavior can get affected by the rough environment in big cities. Kitty Genovese was born in New York City. Her real name was Catherine Susan Genovese. She was 28 years old.

Kitty Genovese was the oldest of five children in a middle class Italian American family and was raised in Brooklyn.

In the 1940’s Catherine’s father, Vincent A. Genovese, started his own business of supplying coats and aprons to local businesses. It was called the Bay Ridge Coat and Apron Supply Company. It looks like she had a good family. As her father described, Catherine was an attractive, outgoing woman who liked Latin American music and loved to dance. She was also interested in history and politics and in debating on many issues.

He remembered that she loved to talk politics and knew a great deal about what was going on (Gado Chapter 2). In 1963, she had moved to Queens.

She rented an apartment located on the second floor of a commercial building on Austin Street in the Kew Gardens section of Queens, a peaceful, mostly residential area. She had a roommate that shared her space with a girlfriend, Mary Ann Zielonko. One time, she had a job as a bar manager at Eleventh Hour Club, a small neighborhood tavern on Jamaica Avenue and 193rd Street in the Hollis section of the borough. The bar was about five miles from her apartment, and she drove her red Fiat to the restaurant nearly every night. She had to work late, sometimes until the early morning.

Probably, when she returned to her apartment in the dark, something made her nervous. But already she got used to going home late at night and she had been a city girl her entire life. She had worked the same as usual in the early morning hours of March 13, 1964. She had just left work, and it was 3:15 a. m. when she parked her red Fiat in the Long Island Railroad parking lot close to her apartment door at 82-70 Austin Street. Suddenly, she was attacked by someone. The man who killed Kitty Genovese told the court later, “I ran after her and I had a knife in my hand. Also heard by several neighbors, “she screamed and cried. ”

People heard and knew what happened to her. But nobody did help her. Even there was a police call box, which linked directly to the 112th Precinct. She may have changed direction to call for assistance, but it was too late” (Gado Chapter 2). After she passed away, the police caught the murderer. In the trial, Winston Mosley pled “not guilty,” though his lawyer changed it afterward to “not guilty by reason of insanity. ” Moseley said that “he followed Catherine from her car in the railroad parking lot to a nearby building where he stabbed her the first time.

He plunged the knife into her back twice. She fell down. He saw lights come on in the building across the street and then returned to his car to move it. He realized the car was parked where people could see it, so he moved it some distance away” (Gansberg, New York Times). However, the psychiatrist judged Mosley to be normal. On June 11, 1964, Winston Mosley was found guilty of murder. Though initially given the death sentence, the sentence was reduced to life imprisonment after the trial went to appeal with New York’s Court of Appeals.

The murderer intended to kill her. But there were thirty eight witnesses and nobody attempted to help her. It is unimaginable. There was a psychological issue that is called bystanders. Most people when hearing about this sort of thing react with horror not so much in the direction of the crime, but rather at the actions of the bystanders. The bystander effect is a psychological phenomenon in which someone is less likely to intervene in an emergency situation when others are present than when a person is alone.

It is one of those questions that can be asked over and over again. “Why did no one call for help? ” It would not be hard to pick up the phone; what kind of people could ignore such a thing? It is very miserable. However, the fact is that the reactions of the bystanders are horrible. This lack of action is one of the reasons why Kitty Genovese is taught in intro to psychology courses. She makes an excellent, though graphic, introduction to the concept of diffusion of responsibility: a peculiar phenomenon of inaction within a group of people.

A person is much more likely to help when he, she feels that he or she is the only one around to help; the idea is that the responsibility entirely borne by them. In a group of people, a person is more likely to think that someone else has assumed responsibility (Silk). There is a certain amount of social pressure not to get involved. Moreover, the bystander effect does not change the fact that resulting excuses heard sound shockingly callous: “We thought it was a lovers’ quarrel. ”

“Frankly, we were afraid. ” ”I didn’t want to get my husband involved. And perhaps worst of all: “I don’t know” (Gansberg, New York Times). In some situations, a large group of bystanders may fail to help a person who obviously needs help. Court proceedings, which eventually ended with the conviction of Winston Mosley, showed that 38 neighbors had seen part of the crime, but that only one called the police 45 minutes after Genovese first screamed for help. The horrible murder has become an example for the world (Goff, Queenstribune). This phenomenon has sociological explanations. The 1960’s saw a natural extension of urban environment.

To people who lived in middle America or small towns, the reaction of the witnesses to the Genovese murder was symbolic of the hectic life in cities like New York (Gado chapter 7). Kitty Genovese’s neighbors were not necessarily cruel, cold, or apathetic. They may simply have been victims of social influence. First of all, the more bystanders are present, the more likely it is that they will assume someone else will help. If people are by themselves when an emergency occurs, they perceive to be 100% responsible for taking action.

However, when there are 10 bystanders, each person perceives to have only a tenth of the responsibility. The higher the number of bystanders, the less obligated each individual is likely to feel to get involved. The Second reason is that if we are unsure of our own perceptions and interpretations, or if the situation is ambiguous, we look to others for help in defining what is going on. If others appear calm, we may decide that whatever is happening does not require our assistance.

Unfortunately, people often try to avoid showing obvious signs of worry or concern until they see that other people are troubled. This sort of caution encourages others not to define the situation as requiring assistance and therefore slow down the support to help. The larger the number of people who do not seem concerned, the stronger the inhibiting influence. Obviously, the helping will not be inhibited if others are showing visible alarm or if the situation is so unambiguous that one does not need to look to the reactions of others.

In Conclusion, Kitty Genoese’s incident has become the occasion for a general attack on the city. There is no cure for this problem. The reason is that people in a large metropolis are not likely or willing to help a stranger in need, although many people would disagree with that premise. Stanley Milgram, one of America foremost researchers in social psychology, wrote in The Nation: It is portrayed as callous, cruel, indifferent to the needs of the people and wholly inferior to the small town in quality of its personal relationships (Gado, Chapter 7).

In general, large cities are very appealing to people. People can do whatever they want to. Compared with the past, people’s life is more comfortable and convenient. However, city nature could make people very individualistic and selfish. As shown by the Kitty Genovese murder, people can stand by and look on to a person dying. It represents that this is a rough world we are living in. Finally, the city’s environment caused the murder. 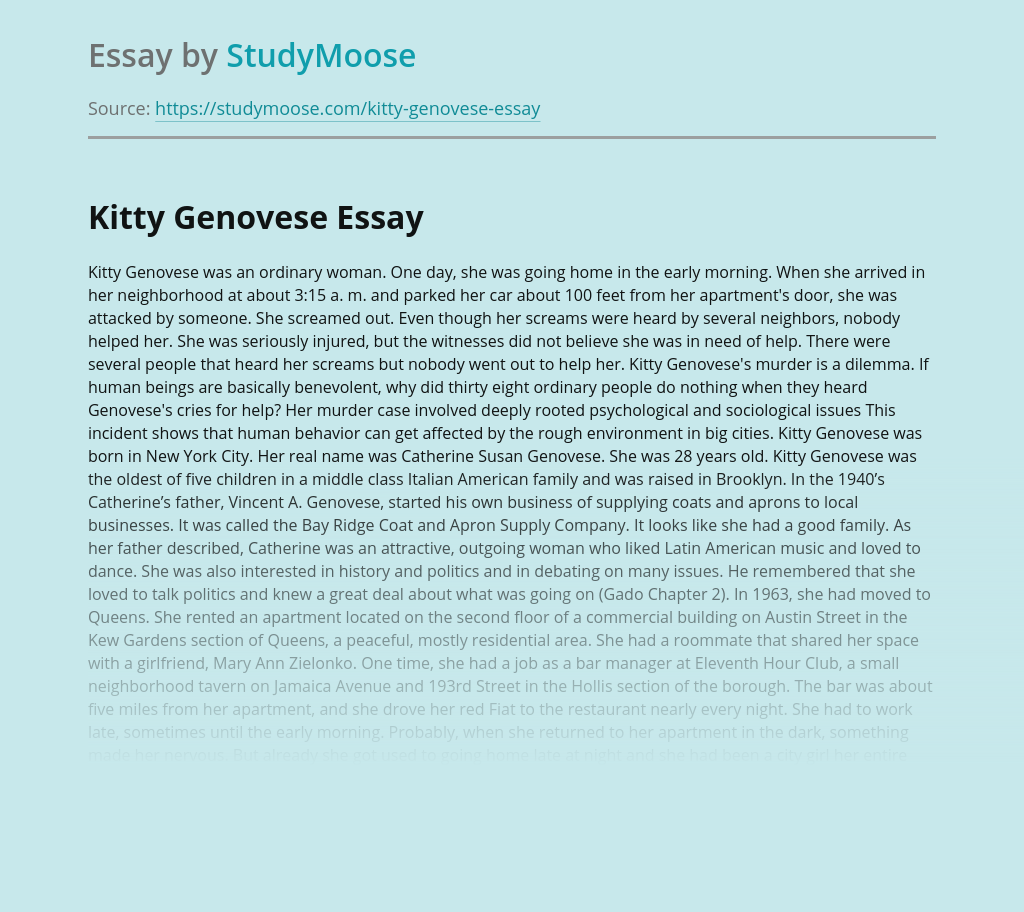 Turn in your highest-quality paper
Get a qualified writer to help you with
“ Catherine Susan Genovese ”
Get high-quality paper
Helping students since 2015
Stay Safe, Stay Original