Character Analysis of Mrs. Wright in “Trifles,” by Susan Glaspell

Mrs. Wright is a character not present at the scene, but for me, posed a great importance in the whole story. In the Story, Mrs. Wright was the wife of the murdered John Wright. She was the primary suspect, since she was the only person with the Mr. Wright when he was murdered, at his case, strangled to death. Mrs. Wright, as told by Mr. Hale, was the person he stumbled upon when he came in looking for John Wright. It was also Mrs.

Don't use plagiarized sources. Get your custom essay on
“ Character Analysis of Mrs. Wright in “Trifles,” by Susan Glaspell ”
Get custom paper
NEW! smart matching with writer

Wright who told him that John was dead, strangled to death while she was sleeping beside him.

She showed no expression of grief or shock when she was telling this to him, and even managed a laugh when she was asked where John was. She was arrested in the end, and that was when the scene in the story started. There are several elements to consider when analyzing the character of Mrs. Wright. There are more things than what meets the eye, which is why it is necessary to scrutinize the things she was with and the things she was doing in the story.

In order to do this, there was a need to introduce two characters that explore Mrs.

Wright’s personality. These characters were Mrs. Hale and Mrs. Peters. Throughout the story, it was through these two that the readers were able to understand Mrs. Wrights character more, even though she wasn’t present in the scene. One of the first elements that could be associated with Mrs.

Wright’s character was the rocker she was sitting on, when Mr. Hale arrived and was looking for John Wright. The rocker represents Mrs. Wrights feeling at that time, wherein she seemed to be at peace, but continued to rock in the stillness of everything around her.

When she was questioned by the people who came into her house, she seemed confident with what she is saying. She was calm when she answered that John wasn’t around, and even managed a laugh when she said that John was dead already. She was calm in the inside, but deep inside her, she was troubled, rather, indifferent of her present situation. Another element that serves useful for the exposition of Mrs. Wright’s character was when Mrs. Peters remembers the young Mrs. Wright, where she used to be a choir member and wore pretty dresses. And that it all stopped when she became the wife of John Wright.

This explanation has opened a door for the audience to think about the life Mrs. Wright is living. Is she happy being the wife of the murdered John Wright? Or does his death liberate her of some sort from the unhappiness that she was feeling when she was with him. The skirt that Mrs. Peters and Mrs. Hale gathered for Mrs. Wright also gave an understanding of her past, wherein she wore pretty clothes and looked pretty herself, and that it seems like she was being deprived of the happy and beautiful things in life when she was with her husband.

Another exposition of Mrs. Wright’s personality was shown by the disarray in her house, of the unfinished tasks she seem to have started yet have found no time to finish. Mrs. Peters and Mrs. Hale had shown the audience a better understanding of what it feels like being a housewife, how one would feel uncomfortable with things left unfinished. This showed that there is definitely something wrong going on with the life of Mrs. Wright, something that could really be useful in solving the case of the murdered Mr. Wright. The two are convinced that Mrs.

Wright has no problems at all with being a housewife, since she has started doing things that a typical housewife would do. Mend clothes, cook, do kitchen work. But because of an undisclosed reason, she wasn’t always able to finish those tasks. And that made the two ladies suspicious of the case. The turning point of the exposition of Mrs. Wright’s character was when the two ladies saw the birdcage without any bird. They were somewhat curious why the cage had no bird in it, since it would make sense that a bird is a perfect companion for a housewife like Mrs. Wright.

When they closely examined the cage, they found that it has a broken cage door; something that made their suspicion grew larger. If you carefully analyze what they were able to discover, the broken door wouldn’t make sense if there was no bird there. The broken door is a manifestation of force being used to pry opens the cage, who did it, was still unknown. The situation that ended their suspicion was when they found out about a dead bird wrapped in cloth that has its head and neck deformed because it was strung up. This was also the missing piece that solved the puzzle of Mrs. Wright’s character.

They found out that Mrs. Wright really had a motive to kill her husband. Mrs. Wright was a person deprived of happiness whenever she was with her husband. Her carefree young days ended when she married John Wright. She stopped singing, she stopped wearing beautiful clothes, and eventually lost all hopes in her life. The bird represented her remaining sanity, her remaining hope in her life. But when it was taken away from her, she also snapped. When the bird stopped singing, Mr. John Wright also stopped living. Reference: Glaspell, Susan. “Trifles”. 1916. July 15 2007. <http://www. vcu. edu/engweb/eng384/trifles. htm>. 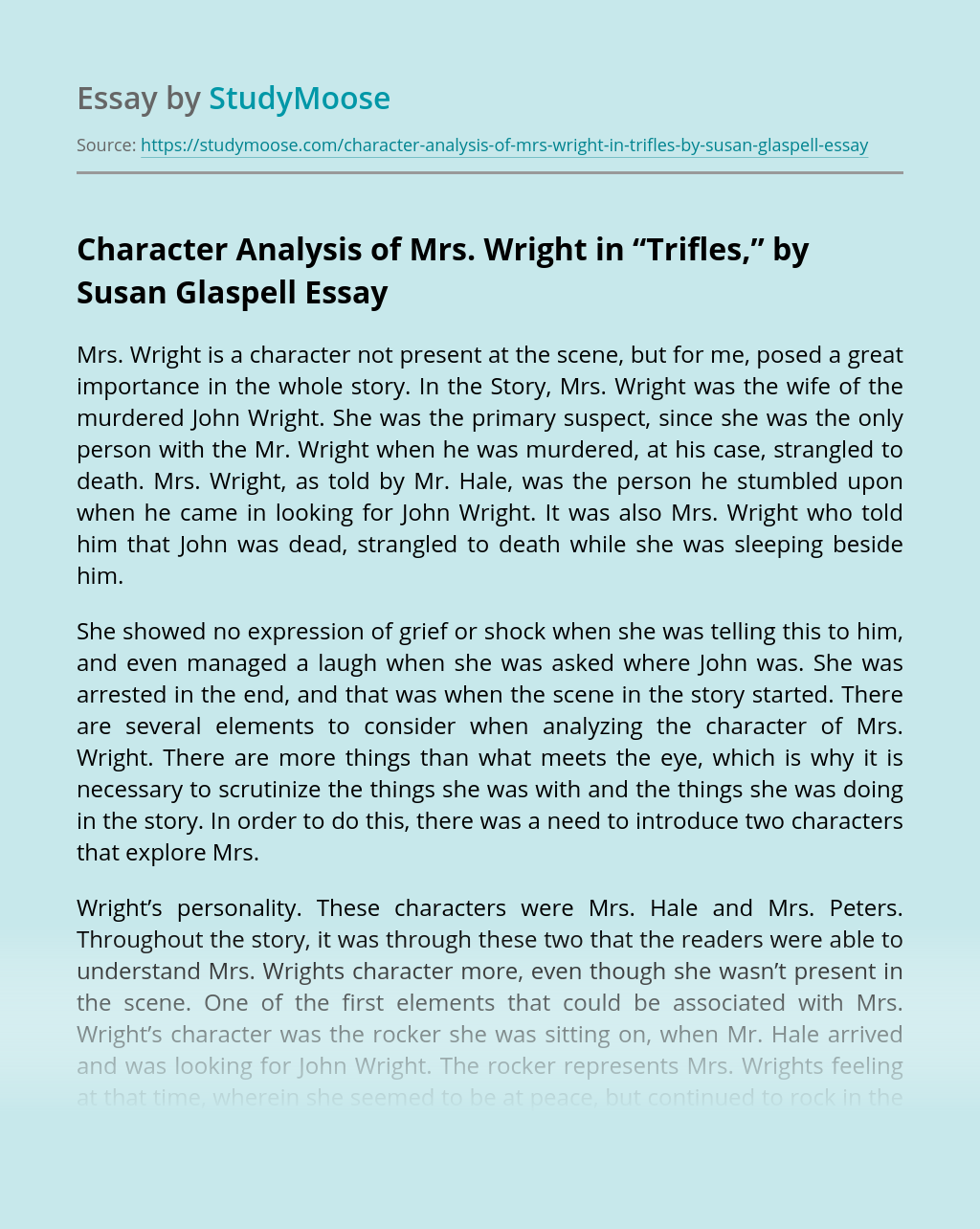