"A Jury of Her Peers" by Susan Glaspell

The theme of a story is expressed in many different ways. Things such as the title, characters, plot, and setting are all means in which a theme can be developed. In Susan Glaspell’s “A Jury of Her Peers,” she examines the theme of feminism by her use of the title, the characters and the plot.

First, Glaspell uses the title to let the reader know that ultimately Minnie Wright’s fate will be decided by a “jury of her peers.

Don't use plagiarized sources. Get your custom essay on
“ “A Jury of Her Peers” by Susan Glaspell ”
Get custom paper
NEW! smart matching with writer

” Minnie’s “peers” consist of two women, Mrs. Hale and Mrs. Peters, who can relate to and sympathize with Minnie’s daily life. These two women will not only discover the evidence against her, but also judge the evidence. This is ironic, because during the early twentieth century women were not permitted to serve on a jury. In fact, women had very few rights in society during that time. In keeping with that way of thinking, the men in the story believe the two women cannot be of any help.

This is evident when the county attorney asks, “Would the women know a clue if they did come upon it?” (Glaspell 193). Yet, in this case, only women who “all go through the same things” can discover and understand the truth (Glaspell 200).

The use of names and the separation between men and women add to the theme of the story. The name Minnie Wright in itself is an example of the insignificant role women played in society in the early twentieth century.

“The name ‘Wright’ plays off the social stereotype of women seeking ‘Mr. Right,’ while Minnie’s name has double significance, ‘Minnie’ being ‘mini’ or ‘minimized,’ which is descriptive of her relationship with John and in general of women’s relationship with men” (Bourne). Early in the story, when “the men went over to the stove” and “the women stood close together by the door,” Glaspell shows the separation between men and women and gives the reader insight to the women’s eventual bond (Glaspell 189).

To men, women’s lives are trivial. “Their only strength and/or success can come from banding together. Triviality is not a value, but it can be overcome by large numbers, by the community of women” (Alkalay-Gut 1). It is this “banding together” that will give Mrs. Hale and Mrs. Peters the strength to hide the evidence and the motive in John Wright’s murder.

The plot of the story revolves around the women’s silence. The men talk constantly any time they appear in the story. On the other hand, Mrs. Hale and Mrs. Peters share plenty through their silence. Glaspell gives the reader several moments when “their eyes met-something flashed to life, passed between them” (Glaspell 196). “Their silence has become a mark of their solidarity, a refusal to endanger a sister” (Holstein 290). In the beginning, the women are silent from the powerlessness; their final refusal to speak rings with the power of intention and choice” (Holstein 284) Through the use of title, character’s names and places in society, and silence, Glaspell gives the reader a glimpse of feminism in this story.

"A Jury of Her Peers" by Susan Glaspell. (2016, Jun 26). Retrieved from http://studymoose.com/susan-glaspells-a-jury-of-her-peers-essay 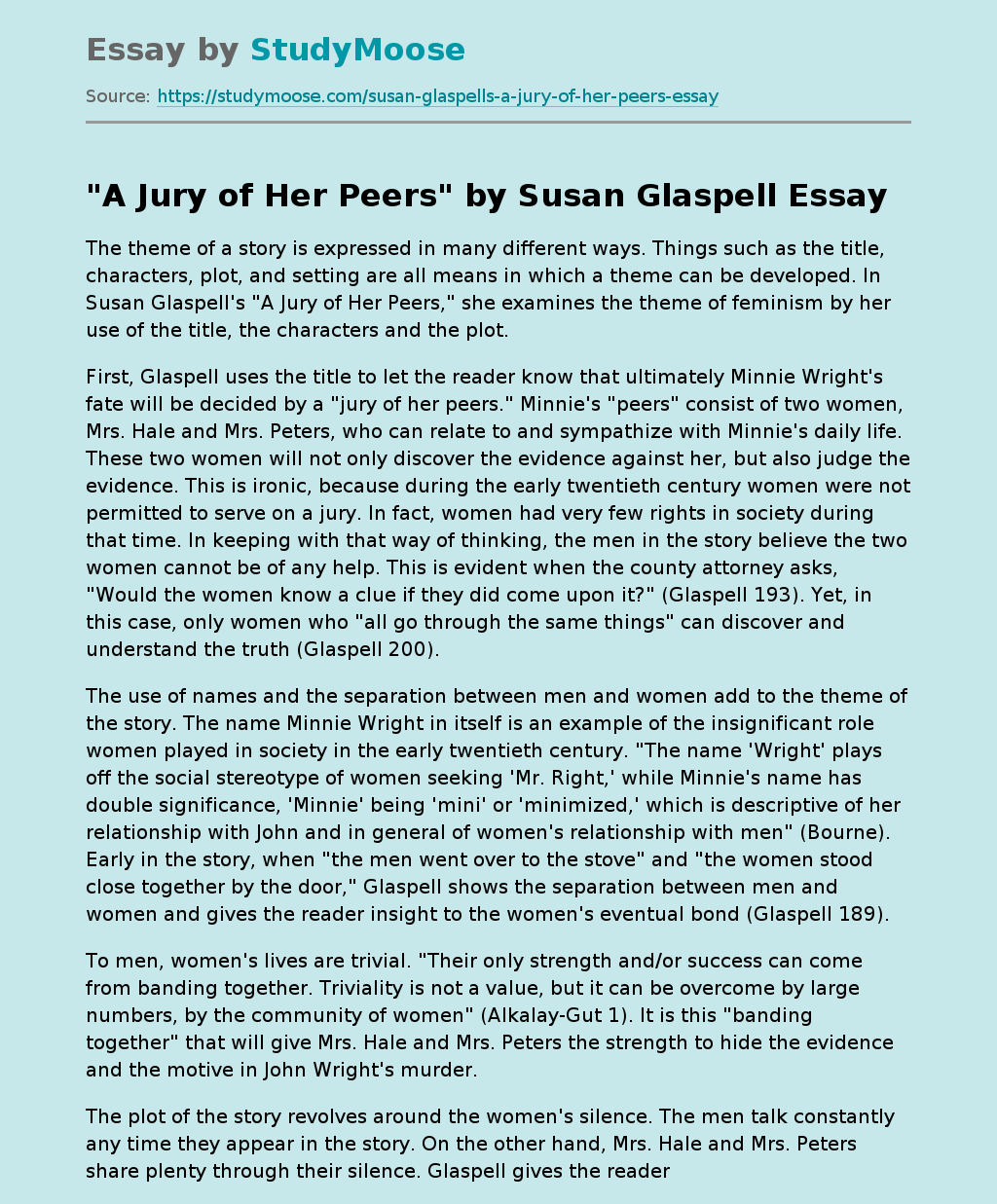