Summary of Trifles by Susan Glaspel

Trifles are a story acted as a play which tells about two investigations on John Wright murder. The key characters are Henry Peters (the sheriff), George Henderson (the county attorney), Lewis Hale and Mrs. Hale (Neighbor to John Wright), Mrs. Peters and Mrs. Wright. The males in the play take the official investigation while the females take the unofficial investigations. This play begins when five characters including the sheriff, the county attorney and Mr.

Don't use plagiarized sources. Get your custom essay on
“ Trifles by Susan Glaspel Summary ”
Get custom paper
NEW! smart matching with writer

Hale enter the kitchen of the Wright farmhouse and join the police who are investigating the murder of Mr. Wright (Glaspell, 6).

Mr. Hale explains how he visited Mr. Wright that moment to share some ideas only to find Mrs. Wright sitting in a rocker. When he asks where Mr. Wright was, Mrs. Wright tells him that he cannot talk to his husband because he was dead (Glaspell, 23). Mr. Hale investigates briefly and find out that Mr. Wright have been hanged.

County attorney leads the men to upstairs and leave the women outside the scene of the incidence gathering the households of Mrs. Wright. However, Mrs. Hale explains how Mrs. Wright was making a quilt before she was jailed and she was happy before the marriage and how she was planning to visit her after suspecting the unhappiness she was suffering as John Wright’s wife (Glaspell, 31). The women discover Mrs. Wright’s bird pet killed which was hidden in a sewing box, the women’s eyes meet but they do not talk and when they hear the men coming from upstairs, Mrs.

Meanwhile the women take the box and the quilt to Mrs. Wright in the jail in order to hide the special evidence. The county attorney reviews the situation as he moves in and indicates that the whole case is perfect except for some missing intention. For instance the investigation terminates, sheriff asks the attorney if there is a need to scrutinize the stuffs the women are taking to Mrs. Wright in jail. The county attorney ignored it jokingly and suggests that there is no need since Mrs. Peters, is basically married to the Sheriff .After the men leave the room to inspect one last detail and the women’s eyes meet again. Mrs. Peters tries to hide the sewing box containing the dead bird in the bag containing quilt pieces she is taking to Mrs. Wright but then again it does not fit it (Glaspell, 37). Mrs. Hale hides the box in her coat pocket and when the men came back in order to help her from being blameless by a future jury and the play indicates most likely to show sympathy to women. The men in the play does not discover Mr. Wright’s killer because they are chauvinistic. In addition, they do not trust any information form the women and the fact that the society the play is set is patriarchal thus they cannot believe that Mr. Wright was not killed by his wife. 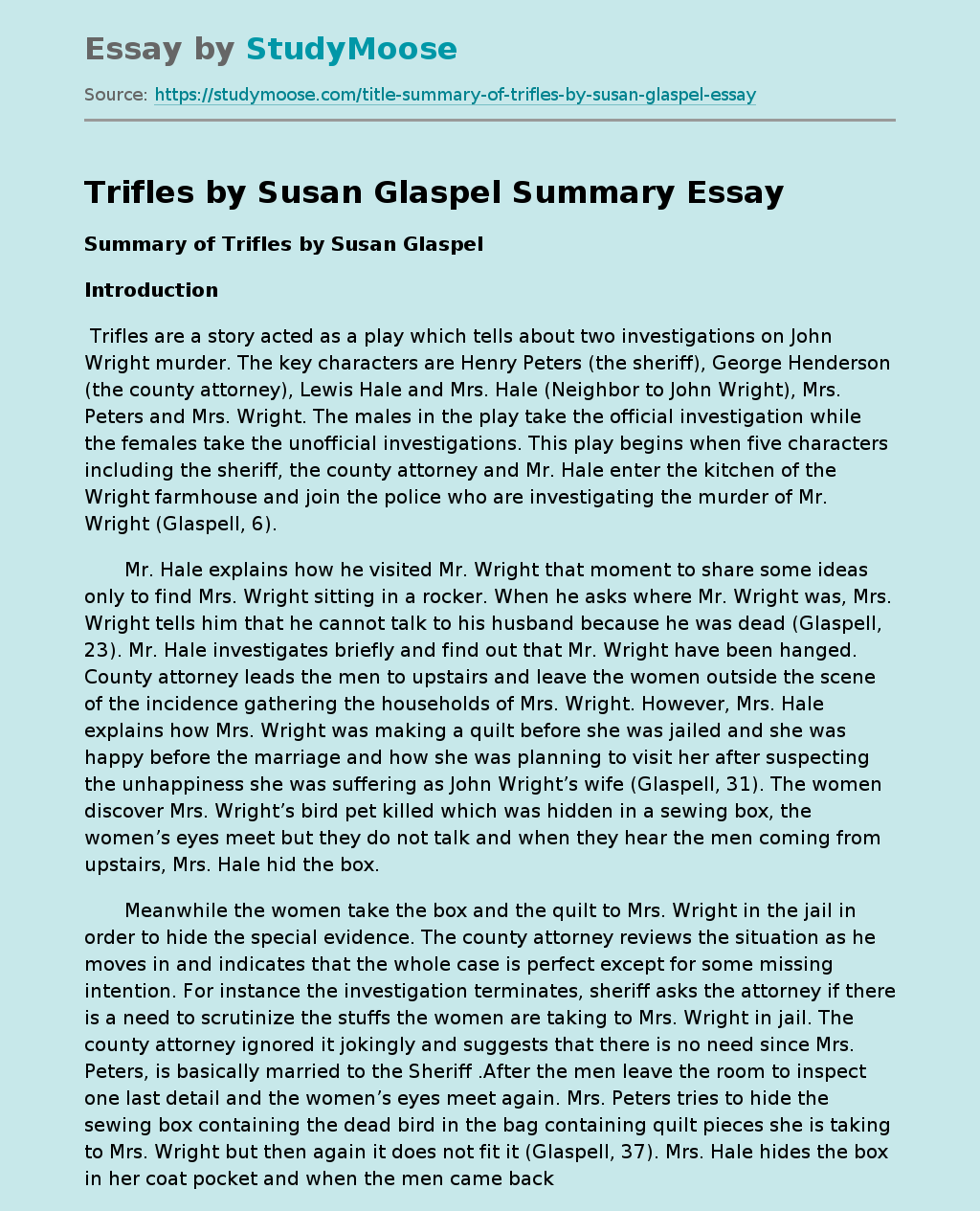