King Lear: The theme of disorder is one of the main and important issues in the play

The theme of disorder is one of the main and important issues in the play. Lear’s selfish and greedy act of dividing the country, ‘know that we have divided in three our kingdom’ doesn’t only creates natural madness and chaos but in this act leads to social madness and frenzy that leads to pain, death and betrayal.

Lear represents an ageing society in decomposition, imperfect in its operation and function; hence, his act of banishing Cordelia, ‘Thy truth then be thy dower’ is due to his lack of judgement.

Don't use plagiarized sources. Get your custom essay on
“ King Lear: The theme of disorder is one of the main and important issues in the play ”
Get custom paper
NEW! smart matching with writer

For a Jacobean audience, this would be seen as political madness and suicide and it would frighten many who would have been reminded of the civil war, which would have been fresh in many peoples’ minds.

His irrational act leads to Goneril, Regan and Edmund exercising their cruel powers to the full. It leads Goneril and Regan into humiliating Lear by putting Kent (his servant) on the stock ‘who stocked my servant?’ and later on by reducing Lear’s might ‘what need one?’

Shakespeare tries to thematically reinforce Lear’s actions at the start of the play, the common belief was that kingship was bestowed by God and Lear’s act of transgression has allowed his daughters to behave in the most inhumane and cruel fashion, which ultimately has caused an internal tempest in the kingdom.

This is illustrated by the successive use of the interrogative ‘What fifty followers? Is it not well? What should you need of more?’ The extent of Regan’s cross-examination and interrogation reflects the extent of cruelty and unnatural disposition that the society is being subjected to by his brutal daughters.

For Shakespeare, the theme of social disorder is significant as Gloucester’s sub-plot parallels that of Lear’s story and thematically reinforces that disorder does occur within the family. As Edmund usurps his brother’s and his father’s wealth and states, ‘let me, if not by birth, have land by wit’. The use of rhyming couplets sums up a Machiavellian villain, his actions eventually leading to Gloucester’s blindness, ‘but I shall see/ The winged Vengeance overtake such children’. The fact that he was betrayed by his own flesh and blood illustrate the extent of the bestial behaviour that some of the characters have succumbed to.

Even though Lear’s actions lead to disorder and madness, reflected in the apocalyptic nature of the storm and the social frenzy, there is still a seed of goodness in Cordelia’s attempt to invade Britain with the French army with the aim to restore the social order and ultimately make Lear the pinnacle of that social hierarchy.

The use of interrogatives and short sentences, ‘Where have I been? Where am I? Fair daylight?’ is used as a dramatic device to show us that by Cordelia coming back she is able to restore order, sanity and peace to Lear, giving Lear his kingship and his return to sanity, leading to social order and an end to the social and natural madness. Lear, who is the essence of the tragic hero with his journey through pain, humiliation and suffering to eventual wisdom, sees a transformation and an order within him. ‘Look there, look there’ – he is no longer inward looking but outward looking towards Cordelia and the hope that she might be alive is open to interpretation.

Overall, literary techniques are useful in evaluating the dramatic impact in that the extract has the use of metaphor, for example, ‘o you are men of stone’ is sued within this extract to dramatically contrast between the emotionally charged Lear and the cold world he lives in which leads the audience to sympathy. In addition, linguistic features are useful to some degree, for example phonological features to express Lear’s emotions such as the repetition of vowel sounds in ‘howl’ which powerfully expresses Lear’s pain towards the tempest in his mind. This in itself is an effective insight into Lear’s unstable mind. As audience, this makes us empathise with is situation and it renews our trust and respect for the old king who was incapable of living in the rapidly changing world around him and to adopt new values and merits about life.

King Lear: The theme of disorder is one of the main and important issues in the play. (2020, Jun 02). Retrieved from https://studymoose.com/king-lear-theme-disorder-one-main-important-issues-play-new-essay 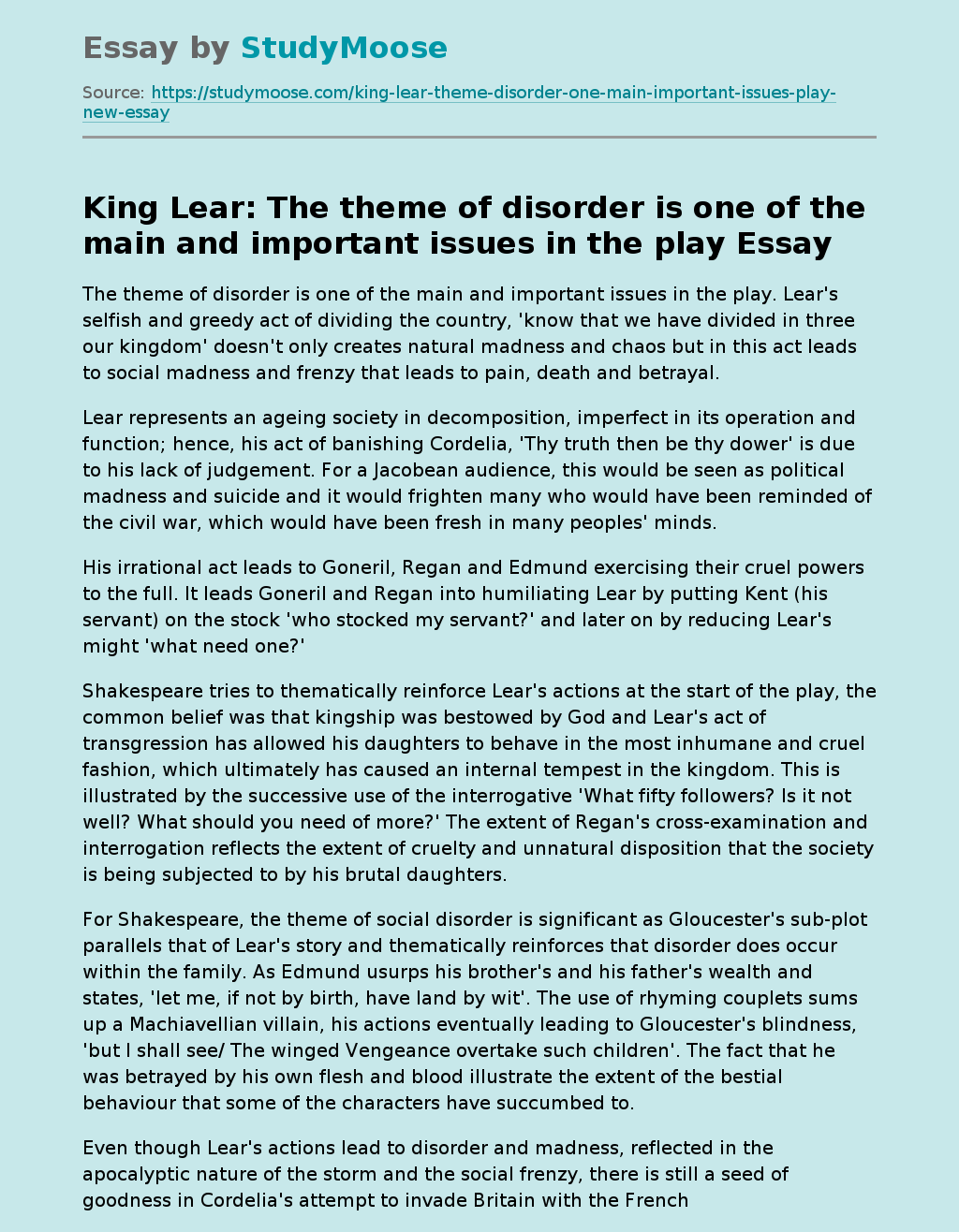