Kant believed that a moral action is made up of duty and good will. Without duty, an action cannot be morally good. This is how he developed the duty-based Categorical Imperative, also known as moral commands, as a foundation for all other rules and will be true in any circumstance purely based on reason. These tell everyone what to do and don’t depend on anything else, such as personal desires. Within the Categorical Imperative, Kant outlines three important maxims in ‘The Groundwork for the Metaphysics of Morals’ which test how morally acceptable an action is.

Don't use plagiarized sources.
Get Your Custom Essay on Kant’s Categorical Imperative Just from $13,9/Page

The first maxim states: “Always act in such a way that you can also will that the maxim of your action should be a universal law”. This can be interpreted to mean that only do something if it can be universalised and if it’s something that will always be acceptable for anyone to do. If it can’t be universalised then it is not a valid moral rule.

To illustrate this, Kant uses the example of suicide, claiming that it is always wrong because it can’t be made a universal law. He asks us to consider if we would want everyone to take their own life in any situation, even if it is to escape a state of suffering and despair.

Stealing would also be considered never to be morally acceptable in Kantian Ethics since it cannot be universalised as well. If it was to be universalised, everyone would be stealing from each other, therefore human relationships would fail because trust is the foundation of human relationships. Furthermore, this maxim is important in order for there to be a harmonious society. The second says: “Act so that you treat humanity, both in your own person and in that of another, always as an end and never merely as a means”.

Here, Kant was telling us that we should value every individual and not use anybody to gain something else; he believed that the end can never justify the means. For instance, if you allowed a person to be humiliated to raise money for charity then this would be self-contradictory. While you are trying to do something good, you are devaluing a human being in the process. Devaluing another human being results in inequality because it denies the other person the right to be rational and independent in judging their actions, when in fact they are just as rational as us; this would be making you seem superior to them.

Kant says you should always aim to help others, but not at the expense of self-destruction or harm of another person. His last maxim is emphasises on the Kingdom of Ends: “Act according to the maxims of a member of a merely possible kingdom of ends legislating in it universally”. The kingdom of ends refers to a social state in which all of the members desire the same good. It’s a society where moral laws are designed to achieve and these goods are common ends of humanity. Kant aims to remove all conflict in order for humans to realise their common aims. He believed that most humans are rational people who prefer moral life over immorality.

However, this is not achievable in this life but we must attempt regardless. In this maxim, Kant reinforces the concept that everyone should act as if everyone was an ‘end’. According to Kant, every being is autonomous and able to make moral judgements through understanding the principle of pure practical reason then applying this to everyone equally. Anything that goes ignores the dignity of a human being in order to achieve its end is morally wrong because it would be going against the Categorical Imperative, which should be used as a basis for all actions. 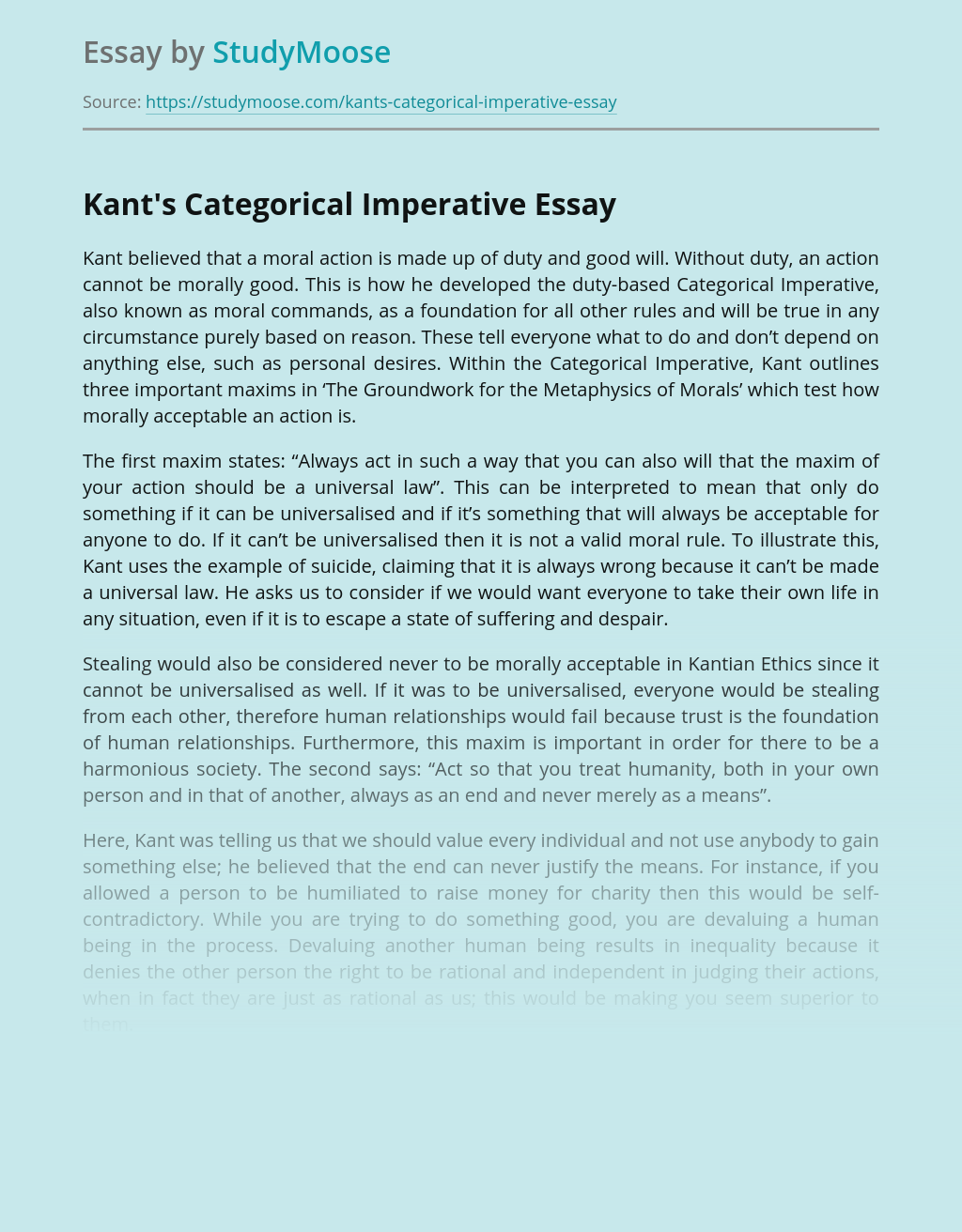 In today’s society people face some form or type of dilemma and it could either be a personal, ethical, or moral dilemma. As individual’s we encounter personal dilemmas, whether it is professional or educational and with these dilemmas there is always some type of choice that must be made and with this choice there is...

The importance of theraputic relationship between client and therapist

Get Essay
The Role of Ethics and Social Responsibility

Abstracts Ethics and social responsibility occupy an important place in human value system. Customer confidence in how business operates has been severely shaking by recent corporate scandals and collapses, such as Enron and bank failures. Hence it is important for companies to consider incorporating ethics and social responsibility into their strategic planning. The (term) ethnics...

At what point can a doctor act against the mothers wishes to save an unborn child? Should the court have a say in the final medical decision of a dying patient? These situations and more were discussed by the panel members where it became very obvious that there are no absolutes when making these types...

Advantages and Disadvantages of Artificial Intelligence

Human intelligence involves many skills such as problem solving, decision making, learning understanding and reflex actions. Many experts in AI have dreamt of creating machines that can imitate our human intelligence. This has led to many possibilities; however, the field of AI has to be understood from both sides of the coin. On the one...