ETHICS AND THE COLLEGE STUDENT Essay

The socialization process is a major influencing factor in our ethical decision making. While we are children, we absorb behaviors and develop our morals and values.

Don't use plagiarized sources.
Get Your Custom Essay on ETHICS AND THE COLLEGE STUDENT Just from $13,9/Page

Our family is the biggest influence in developing our morals. For instance, proper use of grammar, the importance of education, and strong work ethic are all values that family members help us to develop. Negative influences such as alcohol and drug abuse, poverty, and physical abuse can also shape our behaviors and attitudes. Peer pressure is also an important factor college students face when making ethical choices. In a study done by UCLA, 52% of students said that peer pressure affected ethical choices they made (Yeung and Keup 2009).

In addition, the same survey showed how students’ perceptions of peer beliefs and behaviors were the best predictors of their own ethical behavior.

Under age drinking, illegal drug use, and casual sex are some dilemmas that students must make choices about when they are attending college. In a review by Harris (1916), he states that underage age drinking had all but disappeared and drug use was unheard of in the early 1900s. But in a survey taken by UCLA students in 2009 78% of students under the age of 21 admitted to drinking alcohol and 57% of all students admitted to using some type of illegal drug at least once (Yeung and Keup, 2009). In addition these students admitted that peer pressure was a major determining factor. This information shows that over the last decade underage drinking and drug use has increased amongst college students or they priorities have changed.  Stress also causes students to make unethical decisions. In another study done by UCLA 82% of students would “consider” plagiarizing, cheating on a test, or lying to a professor when in a stressful situation like finals, mid-terms, or when facing academic probation (Yeung and Keup 2009).

Social media also plays an important role in college students’ ethical decision making. In the book, “Philosophy for the Masses: Ethics”, Bruce D. Bruce writes that advertising and media can deceptive and persuasive (Bruce 2009 p.200). Bruce goes on to say that sometimes the media blurs the distinct line between right and wrong and our youth/young adults are most often the ones that have difficulty seeing that line clearly (Bruce 2009 p.200).

As stated previously, plagiarism is major dilemma that plagues college students. Stress, peer pressure, and social media are all factors that affect students when deciding whether or not to plagiarize. Young and Keup (2009) noticed that even though many college students thought about plagiarizing when stressed, they felt it was morally wrong. They also discovered that students would rather steal food from the dining facility or even present fake identification to enter a club rather that plagiarize. Most of the students in their study felt condemned or even guilty just thinking about the fact.

Time management and the Ethical PEAS will aid students when facing ethical the ethical decision making process (Frame Work of Ethical Decision Making, para 2-3). Students should set aside time for homework, study time, and extracurricular activities. Structure makes it easier to get things accomplished without the feeling of being rushed. Setting aside study time will give students adequate time to research so they will not feel the need to plagiarize; they will be prepared. Students should also use the Ethical PEAS (Frame Work of Ethical Decision Making, para 2-3). As described in the “Framework for Ethical Decision-Making” by Montana State University, PEAS is an acronym used when executing the ethical decision making process:

Some theories a student can use are (Frame Work of Ethical Decision Making, para 4):
The Front Page Newspaper Test
Would you be comfortable if your actions were revealed on the front page of the paper?

End/Means Test
Does and ethical goal (end) justify the way you get to that goal (means)?

The Golden Rule
Do unto others as you would have them do unto you.

Professional Standards of Conduct
Follow the rules, regulations, and codes set before you.

In summary, college students must make ethical decisions daily. Stress, peer pressure, drugs and alcohol, the socialization process, and a person’s morals and values all play a part in this process. If students exercise the ethical decision making process it will make this process much easier. Ethical dilemmas will never go away. So, we must understand ourselves, how a far we are willing to go, and always try to do the right thing.

ETHICS AND THE COLLEGE STUDENT. (2016, Mar 06). Retrieved from https://studymoose.com/ethics-and-the-college-student-essay 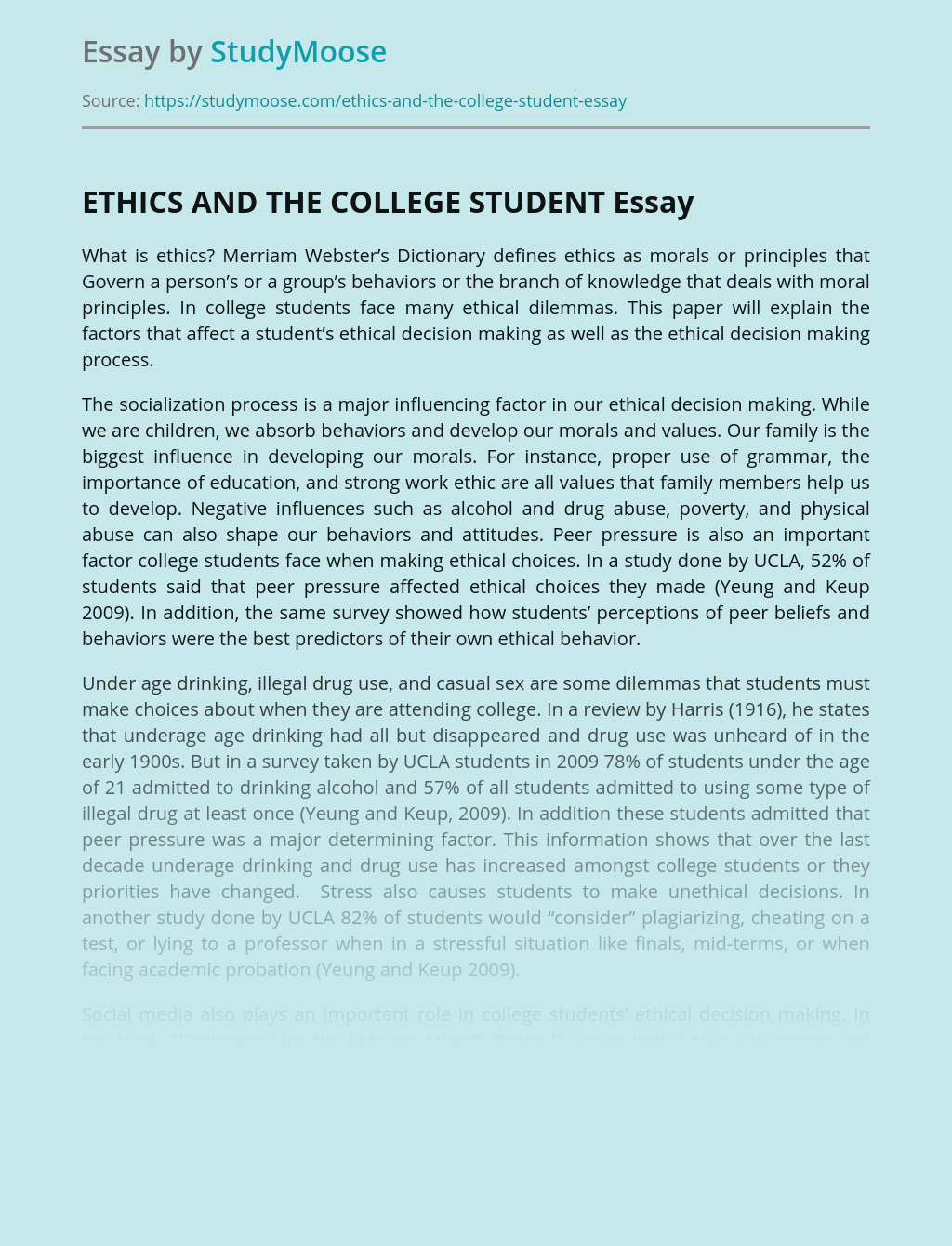 Throughout Shakespeare’s “Macbeth”, Lady Macbeth is consistently depicted as one of Shakespeare’s most evil and frightening female characters, however, she is only evil to the extent of lacking the judgement of her behaviour. Pure Evil can be defined as having only ‘inhumane’ qualities or constantly being morally depraved. Two of Lady Macbeth’s main qualities expressed... VIEW ESSAY

Practices that are good for the environment and society may appear to have a negative impact on corporate profitability, but use of the balance scorecard can result in a clearer picture of the relationship among sustainable practices, corporate strategies, and profitability. This article explores three ways that sustainable practices can be incorporated into BSC and... VIEW ESSAY

View sample
Get Essay
Is there anything convenient without much cost? Convenience is

Is there anything convenient without much cost? Convenience is what people nowadays look for before they take an action. For example, choosing between jeepney or train, online shopping or going to supermarket, chatting or meet-ups, water theraphy or dietary pills, fast food or ‘lutong bahay’ and so on. It is like we pay for the... VIEW ESSAY

The poem “age and youth”, by William Shakespeare (born April 26th 1564? passed away April 23rd 1616) is one of his extensive poems which was released in 1588. It is apart of a collection of various poems in “The Passionate Pilgrim”,? Age and Youth being numeral XII. These numerous poems centre on the concepts of... VIEW ESSAY