A Kantian Approach to Abortion

Abortion is defined as the deliberate termination of human pregnancy through a medical procedure which results in the death of a fetus. This is a voluntary decision, along with the advice of a doctor, that is left up to the mother. The topic of abortion rights became legalized in 1973, with the Supreme Court Case Roe v. Wade decision. Since then, this topic has become a highly published issue in this county. Mothers all around the world, are face challenges while trying to battle with their moral and immoral decisions regarding abortion.

Don't use plagiarized sources. Get your custom essay on
“ A Kantian Approach to Abortion ”
Get custom paper
NEW! smart matching with writer

According to Kantian theory, the use of Categorical imperative states that a fetus is considered a person and killing a person is wrong. Kant believed that people deserve to live. Kantian imperative theory states ‘Act to treat humanity, regardless of the person, as an end in itself and never a means’. Kantian theory believed that every human being deserves dignity and respect, that includes fetus and embryo.

Based on Kants’ theory, all human behaviors as well as actions are done simply because they are considered the right thing to do.

This means that an unborn child should not be calculated into society’s happiness outcomes. If the mothers’ life is being threatened in any way, Kants’ theory would allow therapeutic abortions as being permissible and regard this action as justifiable.
To agree with Kantian theory, you would have to arrive at the conclusion of what constitutes a human a being, some would claim that it begins at conception, others at birth and finally some would argue that it begins when the human being becomes self-conscious and rational.

I believe that it begins at conception, during this period it attaches to the mother lining of her uterus where they become one and he is dependent on her until birth. While in the womb, this fetus develops, a heart, lungs, a brain and all the other necessary vital organs that are required to live outside of the womb. It is in these stages of life that one can visualize the protentional for their future son or daughter. Hypothetically, speaking we could be potentially killing our future doctors, scientist and future inventors of the world.

However, some might disagree that Kant’s ethics has the best approach to the ethics of abortions. First, there are some that would argue that Kant did not make it clear whether he regarded a fetus to have personhood. Some may argue, that a fetus is not a person from the moment of conception. They refer to the fetus as mere fertilized ovary, implanted cells and tissue, therefore it would morally permissible to have an abortion. Opponents would argue that a very early abortion is surely not killing of a person. Next, according to him, would believe that we should at according to a maxim when it can be universalized. Clearly, if you were to universalize abortion, the human race would become extinct and there would be no one left to have an abortion. Finally, those that believe in Unitarianism might argue that abortion avoids difficulties such as the financial burden of a child on poor parents or on society, the disruption of schooling or a career and the disgrace of an unwed mother, in addition problems or probable birth defects to the child would have less chance of happiness.

However, my original position is still correct because, the parent would have other alternatives to abortions, if she decides not to abort. These alternatives would include adoption, fostering options, assistance from the state (Medicaid, child daycare assistance, Food assistance and educational assistance) which would help the families, until their financial or mental health was stabilized. There are individuals in society that cannot have children, who would love, if given the opportunity to adopt a child, would provide a loving and nurturing environment.

A Kantian Approach to Abortion. (2020, Apr 28). Retrieved from https://studymoose.com/a-kantian-approach-to-abortion-essay 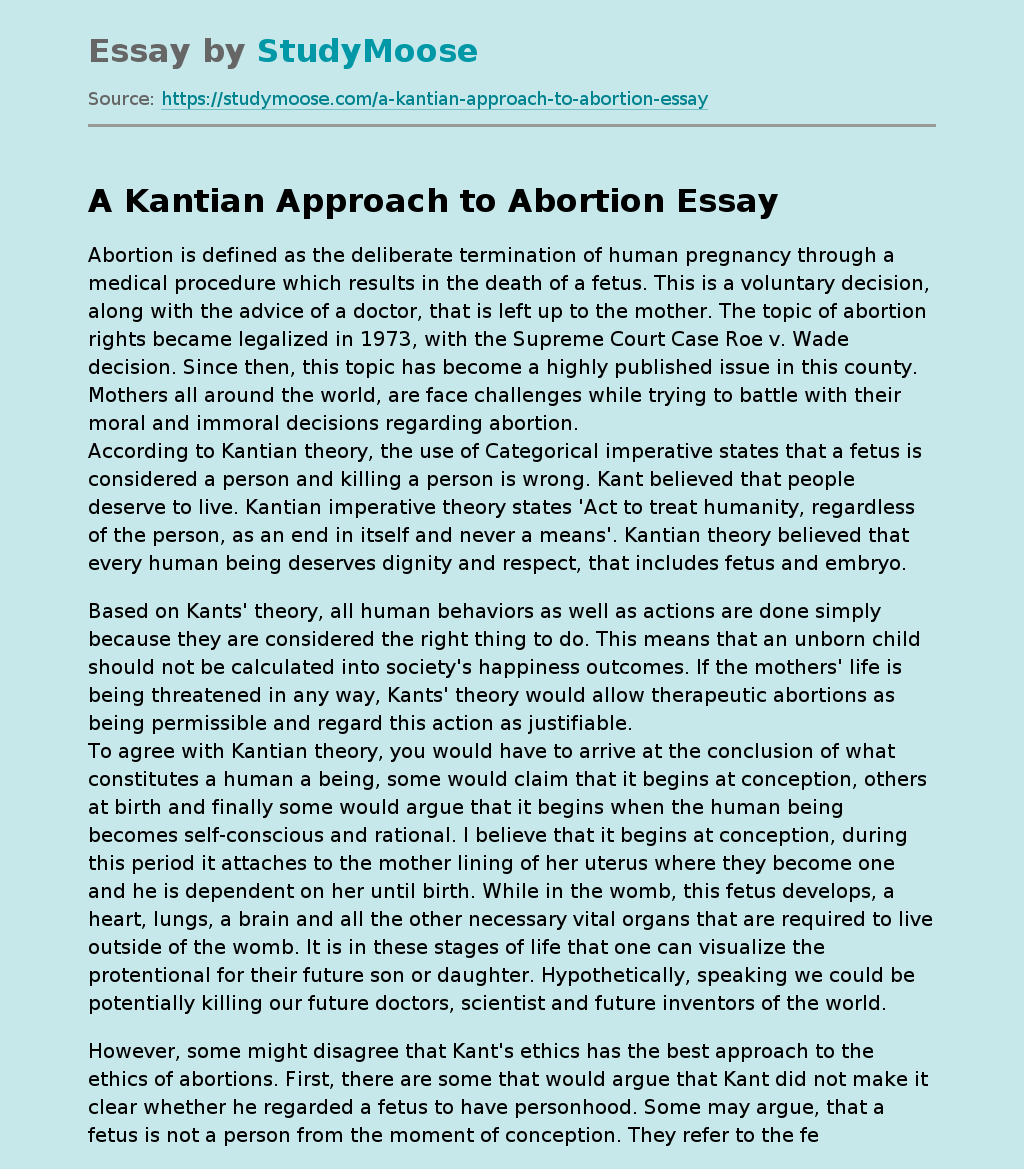