Judiciary in the Philippines

The judicial power shall be vested in one Supreme Court and such in lower courts as may be established by law.

Judicial power includes the duty of the courts of justice to settle actual controversies involving rights which are legally demandable and enforceable, and to determine whether or not there has been a grave abuse of discretion amounting to lack or excess of jurisdiction on the part of any branch or instrumentality of the Government.

JUDICIAL POWER is the power to apply the laws to contests or disputes concerning legally recognized rights or duties between the Sate and private persons, or between individual litigants in cases properly brought before the judicial tribunals.

It includes the duty of courts of justice:

Giving of Advisory Opinions not a Judicial Function

The judiciary is entrusted by the Constitution with the function of deciding actual cases & controversies.

It cannot be required by law to exercise any power or to perform any duty not pertaining to, or connected with, the administration of judicial functions. It is not its function to give advisory opinions. It is a function of executive officials.

The doctrine of separation of powers calls for the other departments being left alone to discharge their duties as they see fit. The president and congress are not bound to seek the advice of the Judiciary as to what to do or not to do. It is a prerequisite that something had been accomplished or performed by either of them before a court may enter into the picture. At such time, it may pass in the validity of what was done but only when properly challenged in an appropriate legal proceeding.

Furthermore, with so many cases pending in courts where in there is an actual and antagonistic assertion between the parties, it would not serve public interest at all if on matters moot and academic their time and attention would still have to be devoted.

Judicial Power Vested in One Supreme Court & in Lower Courts

Judicial power, under the constitution is “vested in one Supreme Court and in such lower courts as may be established by law.” The judiciary composed of the courts is one of the three main divisions of power in our government.

In the exercise of its legislative power, congress may abolish any or all lower courts and replace them with other courts to the limitation that the reorganization shall not undermine the security of tenure.

Regular courts the Phil. judicial system consist of hierarchy of courts resembling a pyramid with the Supreme Court at the apex. Under the Judiciary Reorganization Act of 1980 are:

•administrative bodies under the executive branch performing quasi –judicial functions, like the National Labor Relations of the integrated judicial system. The same thing may be said of courts martial. The authority for the ordering of courts martial pertains to the President as Commander-in-Chief independently of legislation to aid him in properly commanding the Armed Forces and enforcing discipline.

The body to which the public administration of justice is delegated. It is an entity or body in which a portion of judicial power is vested.

A public officer so named in his commission and appointed to preside and to administer the law in a court of justice.

A court is an incorporeal entity composed of one or more judges. Judge alone does not necessarily constitute a court for a while he is an indispensable part he is only a part of the court.

Court cannot exist without a judge.

“ Nothing is more clearly touches the welfare and security of the average citizen than his sense that he can rely on the certain and prompt administration of justice. Law is respected and supported when it is trusted as the shield of innocence and the impartial guardian of every private civil right. But if the law is dishonestly administered, salts has lost its savour; if it be weakly or unfaithfully enforced, the guarantees of order fail, for it is more by uncertainty than by severity of punishment that offenses are repressed.”

“ where there is no judicial department to interpret and execute the law, to decide controversies, and to enforce right, the government must either perish by its own imbecility or the other departments of government must usurp powers for the purpose of commanding obedience, to the destruction of liberty.”

Independence of the Judiciary

The congress shall have the power to define, prescribe, and apportion the jurisdiction of the various court but may not deprive the Supreme Court of its jurisdiction over cases enumerated in section 5 here of.

No law shall be passed reorganizing the Judiciary when it undermines the security of tenure of its Members.

3 Limitation to the Exercise of Power

The judiciary enjoys fiscal autonomy. Appropriations for the judiciary may not be reduced by the legislature below the amount appropriated for the previous year and, after approval, shall be automatically and regularly released.

The Supreme Court shall be composed of a chief justice and fourteen associate justices. It may sit en banc or in its sit discretion, in division of three, five, seven Members. Any vacancy shall be filled within ninety days from the occurrence thereof.

All cases involving the constitutionality of a treaty, international or executive agreement, or law, which shall be heard by the Supreme Court en banc, and all other cases which under the rules of are required to be hear en banc, including those involving the constitutionality, application, or operation of presidential decrees, proclamation, orders, instructions, ordinances and other regulations, shall be decided with the majority of the members who actually took part in the deliberations on the issues in the case and voted thereon.

Cases or matters heard by the division shall be decided or resolve with the concurrence of the majority of the members who actually took part in the deliberations on the issues in the case and voted thereon, and in no case, without the concurrence of at least three of such members. When the required number is not obtained, the case shall be decided en banc: Provided that no doctrine or principle of law laid down by the court in a decision rendered en banc or in division may be modified or reversed except by the court sitting en banc.

Composition of the Supreme Court

The new constitution retained the membership of the supreme court of 15 members including the chief justice under the 1973 charter (sec.4).

The phrase “unless otherwise provided by law” in the 1935 constitution was deleted in the 1973 constitution clearly showing the intention to withdraw from congress the power to alter the composition of the supreme court.

The constitution requires any vacancy to be filled within 90 days from the occurrence thereof.

The supreme court may sit in en banc (i.e..as one body) or in division of three, five or seven members. On the basis of fifteen members the number of division will be five, three or two meeting separately.

Cases to be heard or decided en banc and vote required

Those made purely as executive acts affecting external relations and independent of legislative authorization.. They may be taken the form of a protocol, an instrument supplementary to a treaty or convention, exchange of notes, and other types of documents.

Those entered into in pursuance of acts of congress. They affect internal affairs and domestic rights. They include tariff and postal arrangements, visa fees, commercial relations, and matters affecting trademarks and copyrights, and the like.

Meaning of Power of Judicial Review

Is the power of the courts, ultimately of the Supreme Court, to interpret the Constitution and to declare any legislative or executive act invalid because it is in conflict with the fundamental law.

Limitations on exercise of power of judicial review

The Supreme Court shall have the following powers:

Judiciary in the Philippines. (2016, Sep 28). Retrieved from http://studymoose.com/judiciary-in-the-philippines-essay 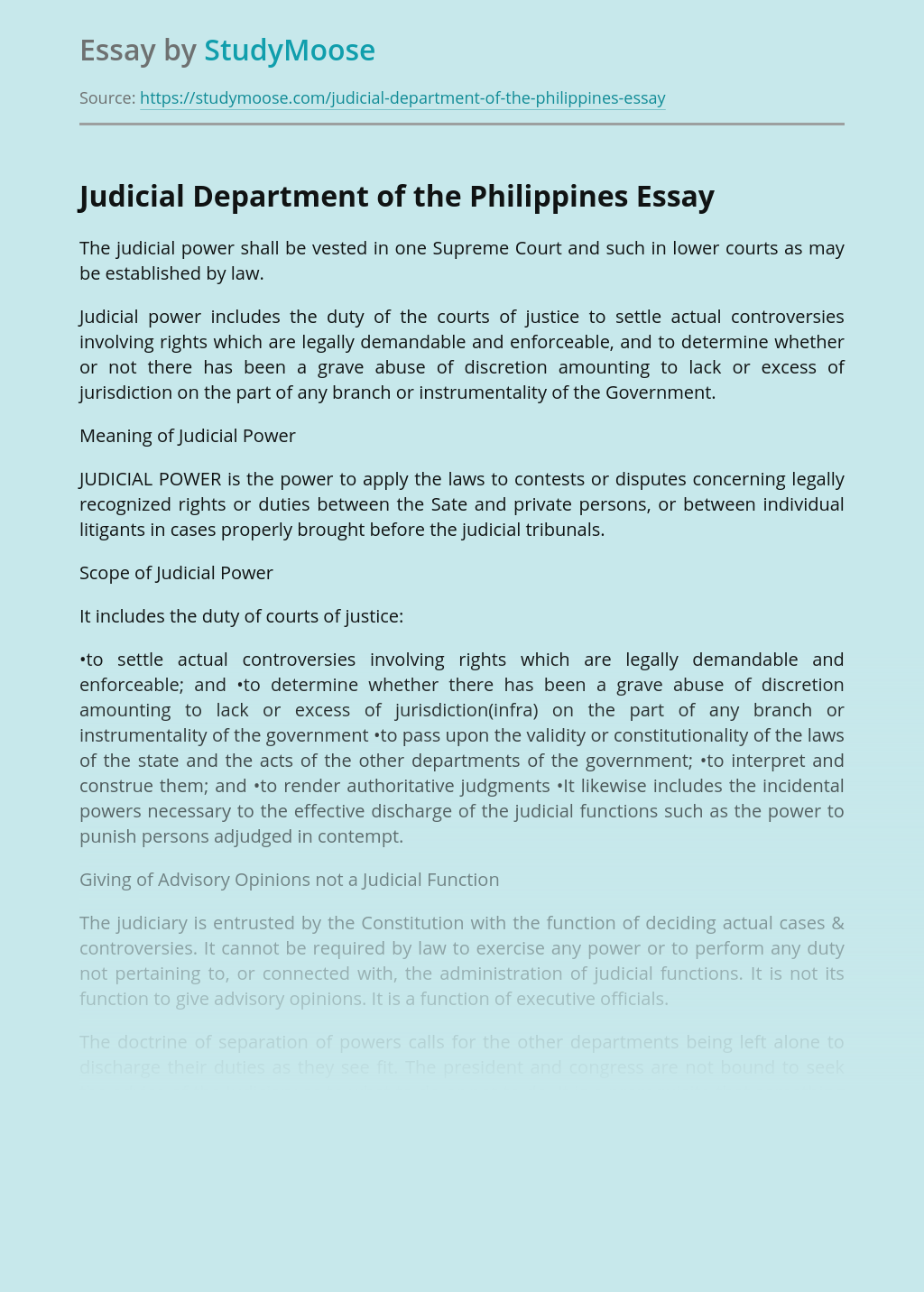 Don’t waste time
Get a verified expert to help you with Judiciary in the Philippines
Hire verified expert
$35.80 for a 2-page paper
Stay Safe, Stay Original