We’ve all heard the saying, You can’t have a rainbow without a little rain. In John Steinbeck’s Of Mice and Men, this principle is applied to the relationships between thecharacters. The novel tells the tale of two companions, George and Lennie, who are travellingtogether looking for work and find themselves among many lonely characters. Steinbeckcompares companionship to loneliness in order to show the reader that one cannot fullyunderstand happiness without first knowing sadness. The author provides the reader with manyexamples of lonesome characters, including Crooks, Curley’s wife, and Candy.

Don't use plagiarized sources. Get your custom essay on
“ John Steinbeck’s Of Mice and Men Play Analysis ”
Get custom paper
NEW! smart matching with writer

He does this inorder to highlight the great friendship between George and Lennie.The author uses Crooks’ solitude in contrast to the other friendships. When Crooks andLennie are in the barn, Crooks explains to Lennie that a guy gets too lonely an’ he gets sick(73), clearly referring to himself. Steinbeck’s goal is to make the character of Crooks appearopposite to George and Lennie’s characters.

While George and Lennie have each other, Crooksonly has his books, and even those, he says, ain’t no good.

A guy needs somebody — to be nearhim (72). Crooks’ room is said to have many personal belongings lying around unorganized.By creating such a messy image of Crooks’ room, Steinbeck demonstrates that being alone,Crooks could leave his things about (66). Crooks’ isolation is aggravated by him beingAfrican-American. Crooks, a lonely character, is used as a counterexample of the relationshipbetween George and Lennie. For the reader to fully understand their happiness, he or she must first be introduced to a melancholy character.

Similarly, in life one must first understand whathe is missing before one can fully appreciate what he has.An additional example illustrating the importance of companionship is the seclusionexperienced by Curley’s wife. Being the only woman among a group of men, she seems like astrong character, but in reality, her gender distances her from the others on the ranch.

Crooks,Lennie, and Candy are in Crooks’ room when Curley’s wife walks in. Crooks emphasizes that hedon’t want no trouble (77), but Curley’s wife counters that by saying, Think I don’t like totalk to somebody ever’ once in a while? Think I like to stick in that house alla time? (77). Thispassage shows that even a woman who appears to have a companion in life, her husband Curley,just wants to have a friend to talk to, like any other person. Curley’s wife is willing to go out ofher way and even get in trouble with her husband just to have a friendly chat. This longing for afriend is what ultimately gets her killed by Lennie when she approaches him in order to have aconversation with him. Furthermore, Steinbeck forgives the fact that she got the eye (28),meaning that she flirts with all of the men, because her intentions are benign and she simplywants to have somebody to talk with. This deep loneliness is used to bring out the theme ofcompanionship. Curley’s wife has a sad life, and the reader needs her as an example tounderstand how truly grateful George and Lennie are that they have each other. Steinbeckteaches the reader to appreciate how the melancholy can bring out the boon life has to offer.

Candy, the old swamper, is shown as an isolated person, much like the other characterson the ranch, yet, unlike the others, he is allowed to share George and Lennie’s friendship. Hewillingly accepts the invitation to be a part of George and Lennie’s dream to purchase their ownfarm. By letting Candy have a glimpse into George and Lennie’s companionship, Steinbeckdirectly shows how different Candy’s life could have been if he had partners. Candy asks earnestly to be part of George and Lennie’s dream. His supplication is more than a request toown his own house and property; it is a plea for companionship. He emphasizes this need to bewith people by saying, S’pose I went in with you guys (59). Unlike the others on the ranch,Candy experiences the feeling of having a partner in life, his dog. Candy describes him as truefamily, saying that he had him so long. Had him since he was a pup (44). Despite that, Candyplaces the life of his dog into the hands of Carlson, the man who ultimately kills him. Candy isthe only character from the ranch who experiences the loss of someone close. Candy has a tasteof companionship and it is suddenly ripped away from him. Only after Candy is forced to sufferthrough the death of his dog does he truly understand the necessity of a friend in one’s life.

Likewise, in life, one can only appreciate happiness after having experienced the troubles thatcome with sorrow.Steinbeck uses the relationship between George and Lennie to express the theme ofcompanionship in contrast to loneliness. George tells Lennie the same story of their friendshipoften throughout the novel. Lennie knows it by heart and when George begins retelling it,Lennie completes it by saying, I got you to look after me, and you got me to look after you(14). This demonstrates the true bond between George and Lennie because it shows they arealways there for each other. The thought of losing a friend can make a relationship evenstronger. Steinbeck describes a conversation between George and Lennie after their argumentwhen they are resting next to the Salinas River in the beginning of the novel. Lennie says, Ifyou don’ want me I can go off in the hills an’ find a cave. I can go away anytime (12).Nevertheless, the men hold on to each other and this makes their great friendship appear all thatmuch better because it shows how strong it is. The loneliness, an analogy for something sad in life, is presented alongside companionship, or happiness, in order to show that one cannot existwithout the other and that both are necessary for enjoying life to the fullest.

In Steinbeck’s Of Mice and Men, the theme of loneliness is used as a contrast to thetheme of companionship. Many characters are faced with the burden of with going through lifealone. Crooks is left out because of his skin color. Curley’s wife just wants someone whom shecan talk to, but is considered an outcast due to her gender. Candy shows his loneliness throughthe loss of his dog, but he also has a glimpse into happiness through sharing the dream of Georgeand Lennie. All of these characters are used to counter the strong relationship between Georgeand Lennie and their faithful devotion to each other, yet the reader is also introduced to thefragility of their friendship. Life is full of ups and downs, but is critical to understand that thisbittersweet quality serves a greater purpose: to bring out the good and make it stand out amongall of the bad. 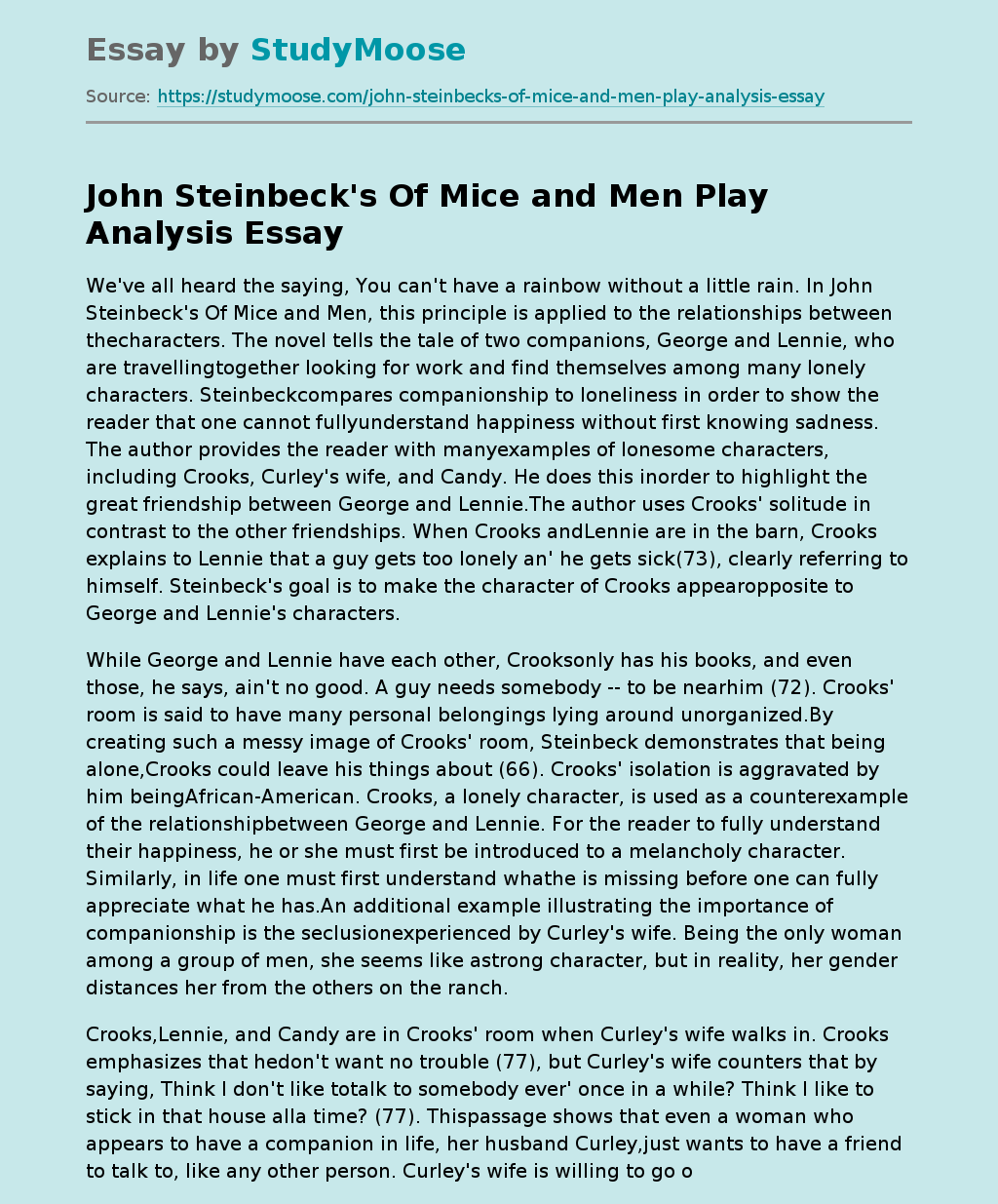