The issues of women in prison are clouded with amazing stereotypes and silence. Women are the fastest growing sector of the prison population in the United States. Even more than men, most women are incarcerated for non-violent offenses. These women are often products of sexist and racist attitudes, and do not have marketable job skills. Economic survival for herself and her family often means prostitution, forging, petty theft or some kind of hustle. Once incarcerated, women have less access to education, job training programs, and other services than men.

Don't use plagiarized sources.
Get Your Custom Essay on Issues facing women in prisons Just from $13,9/Page

When released, women are more often shamed for having done time, and less likely to reach out for support. In the 1970s, two women sociologists, Rita Simon and Freda Adler, argued that the extent and nature of women’s criminality appeared to be changing. They predicted that women’s criminal behavior would continue to undergo dramatic changes until it closely resembled men’s. The increase in the frequency and seriousness of female criminality, they believed, would come in crimes traditionally associated with men.

The majority of women continue to be arrested for victimless crimes: for being drug addicts, for being intoxicated, for being prostitutes. Only 14 percent of those arrested for violent offenses are women. This rate has remained stable over time. Three out of four women arrested for violent offenses have committed simple assault. Women constitute approximately one-tenth of the arrests for robbery, and one-tenth of the arrests for murder and non-negligent manslaughter. Changes in women’s criminal behavior, like changes in women’s social roles, have been slow and predictable (Corrections Statistics).

Currently over 95,000 women are incarcerated in U. S. prisons, another 70,000 in our jails. The women’s prison population in the U. S. has quadrupled since 1980, largely a result of a war on drugs that has translated into a war on women and the poor generally. African-American women have been hardest hit by this increase. They are 14. 5 percent of the women in the U. S. population, but they constitute 52. 2 percent of the women in prison (Corrections Statistics). Poor young women of color, most of whom are mothers, are locked in old overcrowded prisons, serving lengthy sentences for drug offenses and petty property crimes.

Incarceration for women in the United States has come to mean enduring endless hours of boredom and idleness as women are systematically denied access to meaningful programs; months and years without visits from their children whose guardians cannot afford travel expenses; indignities, disrespect, and infantilization from the correctional staff. Women in prison are subject to an official system that carries the norm-enforcing patriarchal pattern of social control to absurd lengths. As night follows day, omnipresent surveillance elicits the behavior it is installed to control.

Faced with implacable patriarchal authority, a female inmate’s seemingly irrational oppositional behavior becomes a means for re-establishing her nature, for resisting the alienation experienced when she is denied traditional expression of both her personal individuality and her collective responsibilities. Intensive surveillance of female inmates is an historical vestige in institutions of correction; it reflects the belief that women should conform to gender-based stereotypes stressing obedience, dependence, and deference.

California has the highest population of female prisoners among U. S. states. Since mandatory-sentencing laws went into effect in the mid 1980’s, the California female prison population has skyrocketed. At the end of 1986, women in California’s prisons totaled 3,564. As of September 2000, the female population now numbers 11,091 – an increase of 311% in fourteen years (CDC Data). The vast majority of women sentenced under California’s two-strikes and three-strikes laws are for nonviolent crimes, particularly drug offenses.

A 1999 study of women in the California prison system found that 71% of incarcerated women had experienced ongoing physical abuse prior to the age of 18 and that 62% experienced ongoing physical abuse after 18 years of age. The report also found that 41% of women incarcerated in California had experienced sexual abuse prior to the age of 18 and 41% experienced sexual abuse after 18 years of age. Such a background further inhibits the ability of female inmates to report or seek recourse in cases of abuse within the prison system. (Bloom, Owen)

Prisons for women in California are on average 171% over their designed capacity, with two prisons almost 200% over capacity. The Federal women’s prison in Dublin is more than 128% over capacity (CDC Report). Valley State Penitentiary for Women (VSPW) and the adjacent Central California Women’s Facility (CCWF) together house almost 7,000 incarcerated women and is probably the largest women’s prison complex in the world. (AI Report) Women in California state prisons make only pennies an hour. Females incarcerated in federal prisons make a minimum of $5. 75 per month.

Though inmates from the United States can sometimes make more money through Federal work programs, non-nationals are not permitted to make more than the base monthly amount. In California state prisons, women earn as little as $. 05 per hour. In the California prison system, visitation is a privilege not a right. Prisoners on death row and prisons in California serving life sentences without parole cannot receive unsupervised family visits. Family visits are also not permitted with common law relationships. Pregnant women in prison face unique problems.

Stress, environmental and legal restrictions, unhealthy behavior, and weakened or nonexistent social support systems—all common among female inmates—have an even greater effect on pregnant inmates. Women in prison are placed outside the normal mothering experience in such ways (Huft et al): • Stress — incarcerated women experience higher than normal levels of stress. They have a higher incidence of complications during pregnancy, labor, and delivery. • Restricted environment — adaptation to pregnancy is limited by the prison environment.

Mandatory work, structured meal times, and lack of environ-mental stimulation may decrease the likelihood of individualized prenatal care. For instance, pregnant inmates receive standard clothing that often does not fit well. Alternatives for special clothing (e. g. , stockings and shoes) may be dictated by availability within the institution or by what family and friends are willing to supply. In addition, disciplinary action or other restrictions may interfere with the offender’s adaptation to pregnancy.

• Altered social support systems — even if ideal opportunities for nutritional education and physical development are available during pregnancy, pregnant women will not take advantage of them if they do not receive support from their inmate peer groups. Limited health care facilities or staff sometimes warrants the immediate transfer of a pregnant inmate to a civilian hospital at the onset of labor. • Altered maternal roles—Maternal identity depends on rehearsal for the anticipated role after birth. Women in Federal prisons do not directly care for their infants after birth.

Developing a maternal role therefore depends upon plans for placing the infant after birth. The inmate can place the infant either for adoption or for guardianship. Preparation for care includes teaching the mother decision-making skills. Counseling should emphasize developing an identity during pregnancy and strategies for coping with the loss of the infant. After the birth, the mother will need counseling in making or accepting the decision to place the infant for adoption or temporary guardianship. One of the major concerns of women in prison is their children.

A large percentage of women in our criminal justice system are mothers. According to Amnesty International, 78% of women in state prisons are mothers (Impact on Children, 1999). Because there are fewer women in prison than men, there are fewer women’s facilities throughout the country. As a result, women are placed in prisons located miles away from their children and families (Chesney-Lind, 1998). Consequently, children spend less time visiting their mothers in these facilities. For children who resided in the same home as their mother prior to her incarceration, this is an extremely traumatic experience.

Children whose parents are incarcerated are often placed in the care of other family members, in foster care or in juvenile homes. “Nationwide, 50% of the children in the juvenile justice system have a parent in prison” (Impact on Children, 1999). Very few children will go live with their father and the majority of children, approximately 60%, are taken in and cared for by their grandmothers. However, many of these grandmothers are financially unstable and do not have the means to support and satisfy all the needs of these children.

As if this is not traumatic enough, children of incarcerated mothers face many other hardships. Along with being removed from the home they grew up in and their families, children face other unfamiliar challenges such as attending new schools and living in new homes in alien settings. These children may demonstrate a variety of emotional and psychological responses such as “hyperactivity, attention deficits, delinquency, and teenage pregnancy, withdrawal from social relationships or retreat in to denial” along with difficulty with intimacy and assertiveness, lack of trust in others, and poor academic performance.

The coed facilities present less problems than one would expect, a phenomenon attributed to the “softening” effect women have on male inmates. The living conditions at a women’s prison are somewhat more pleasant, but there is often a shortage of programs. Women’s prisons are usually less security-conscious. Neither the inmate code nor the hidden economy is well developed. Rather than form gangs, women tend to create pseudofamilies, in which they adopt various family roles — father, mother, daughter, sister — in a type of half serious, half play-acting set of relationships.

Some of these roles, but not all of them, involve homosexual relationships. In conclusion, I think that these issues of women in the criminal system should be brought to more awareness to let the public know of these problems and maybe it will help women and young women to get off that track of crime so they don’t end up like all of these other women in these prisons. 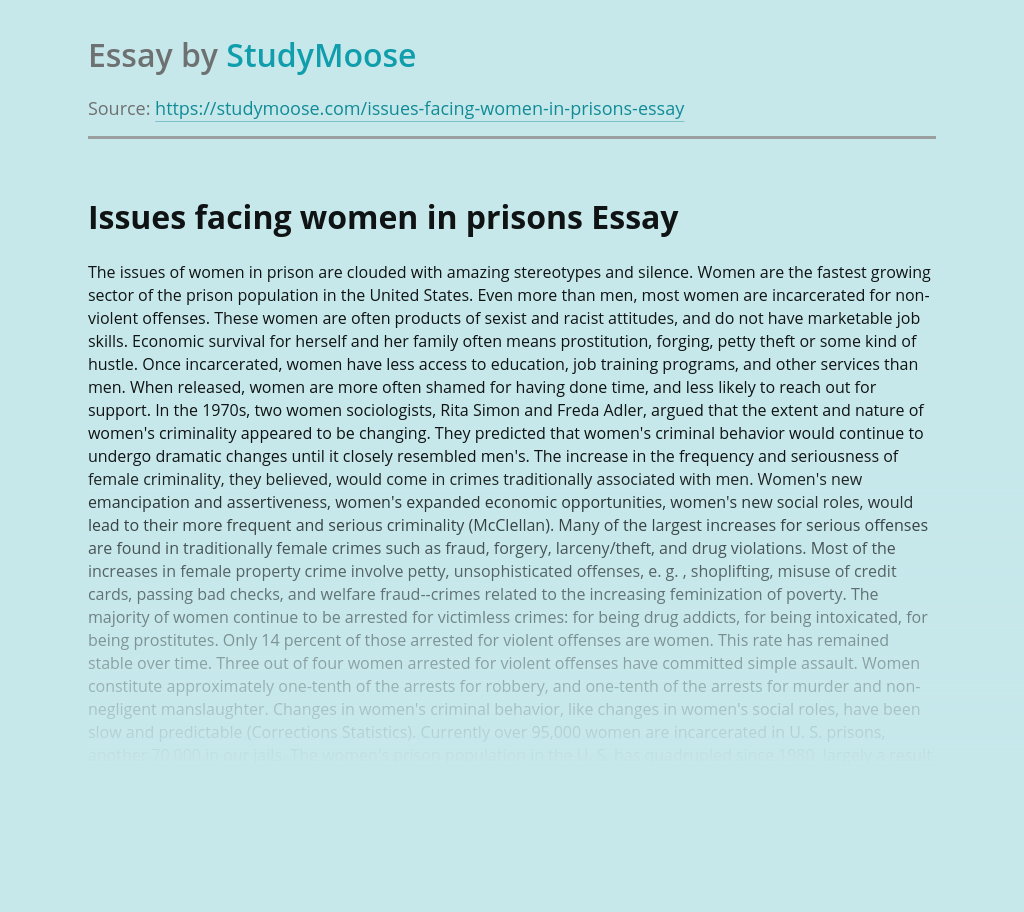 Economic Critique Of US Economy Issues

Maintaining a steady economy is no small challenge for any nation nevertheless possessing the ability to change and develop brand-new and created methods of keeping makes for a flourishing economy. This newsletter will summarize the various economic aspects that impact aggregate demand and supply such as unemployment, expectations, consumer earnings, and rates of interest within...

The monopoly describes an industry by comprising a single firm. In other words, the firm and the industry are one and the same. In the absence of regulation, monopolists can exercise control over the prices they charge for products and services. Of course, in reality, it is often difficult to define industries (whether in terms...

Visual Persuasion: The Role of Images in Advertising

Advertising is part of our daily lives as advertisers use numerous ways to attract the customer’s attention. Advertising can be referred to as non-personal communication on a corporation or its products that are broadcasted to viewers through a mass medium. All efforts to inform and convince must respect the principles of human freedom for them...