Role of Correctional Officers and Their Professional Behavior

Correctional officers play a vital role in the prison system. They are the first line of defense in prisons. They are ultimately responsible for the safety, security, and supervision of inmates that are under their care. They must enforce all the rules and policies that the prison officials emplace in order to maintain good order and discipline. Without correctional officers, prisons would not run and complete ciaos would occur.

Turn in your highest-quality paper
Get a qualified writer to help you with
“ Role of Correctional Officers and Their Professional Behavior ”
Get high-quality paper
NEW! AI matching with writers

” (Stojkovic, S., & Lovell, R. 2013) Correction officers do this in a couple of different ways. The first is allowing inmates to help them complete their responsibilities that are required of the correctional officer. When the guard does this, it in turns, makes the forces the officer to turn his back on less severe rule violations that an inmate might break.

By doing this, this helps build the relationship between the official and prisoner, while accomplishing the tasks that they are to accomplish on a daily basis.

Another way that correctional officers build social relationships with prisoners is through the reward system. This is exactly what it sounds like. When officers give the inmates rewards, they gain more control over the population of inmates that are in charge of. But when it comes to rewarding prisoners, officers must know to limit the rewards that are given to inmates.

With this working relationship that inmate and prison officers have, it must be strictly professional. Officers must see that they have a job to do and not let their emotions interfere with their job. When emotions get involved, correctional officers judgment can become impaired. If this happens, nothing good can come from it. Inmates can coerce emotionally involved officers to do what they want. The mutual bond that was once built is then thrown out the window.

Correctional officers do not just have a social role with the inmates; they also have certain roles within the prison. These roles are “performing security checks, supervising prisoners, and employing physical control and restraining prisoners when appropriate.” (ACGAS Editors, 2013) They also must be aware of the prisoner’s rights and responsibilities. They must make sure that the prison is a safe and secure place for both, themselves and the inmates under their care.

To make sure that correctional officers are doing their job appropriately, administrators have implemented “watchdogs.” Watchdogs report on a wide range of prison issues, including overcrowding, gangs, security and use of force.” (Johnson, 2014) These people keep everyone on the right side, making sure that they are following all the rules.

Prison officers main job inside is security. They make sure no one that is unauthorized enters, and no one that is unauthorized leaves. They are the first and only real line of defense inside the walls. While being strict but firm with the inmates, they must show that they care about each of them, even if they don’t. They should actively participate in-group activities and refer inmates to specialist if they need help. They also have to investigate any potential problem, no matter how small it might be, to the fullest potential that it could be.

Prison officers by far, have the hardest and most rewarding job in the prison system. They both enforce rules, and can change lives at the same time. By showing prisoners respect and a passion for their job, correctional officers show that they care about the inmate’s well being. Without prison officers, prison systems would cease to run effectively.

Role of Correctional Officers and Their Professional Behavior. (2016, Aug 24). Retrieved from http://studymoose.com/role-of-correctional-officers-and-their-professional-behavior-essay 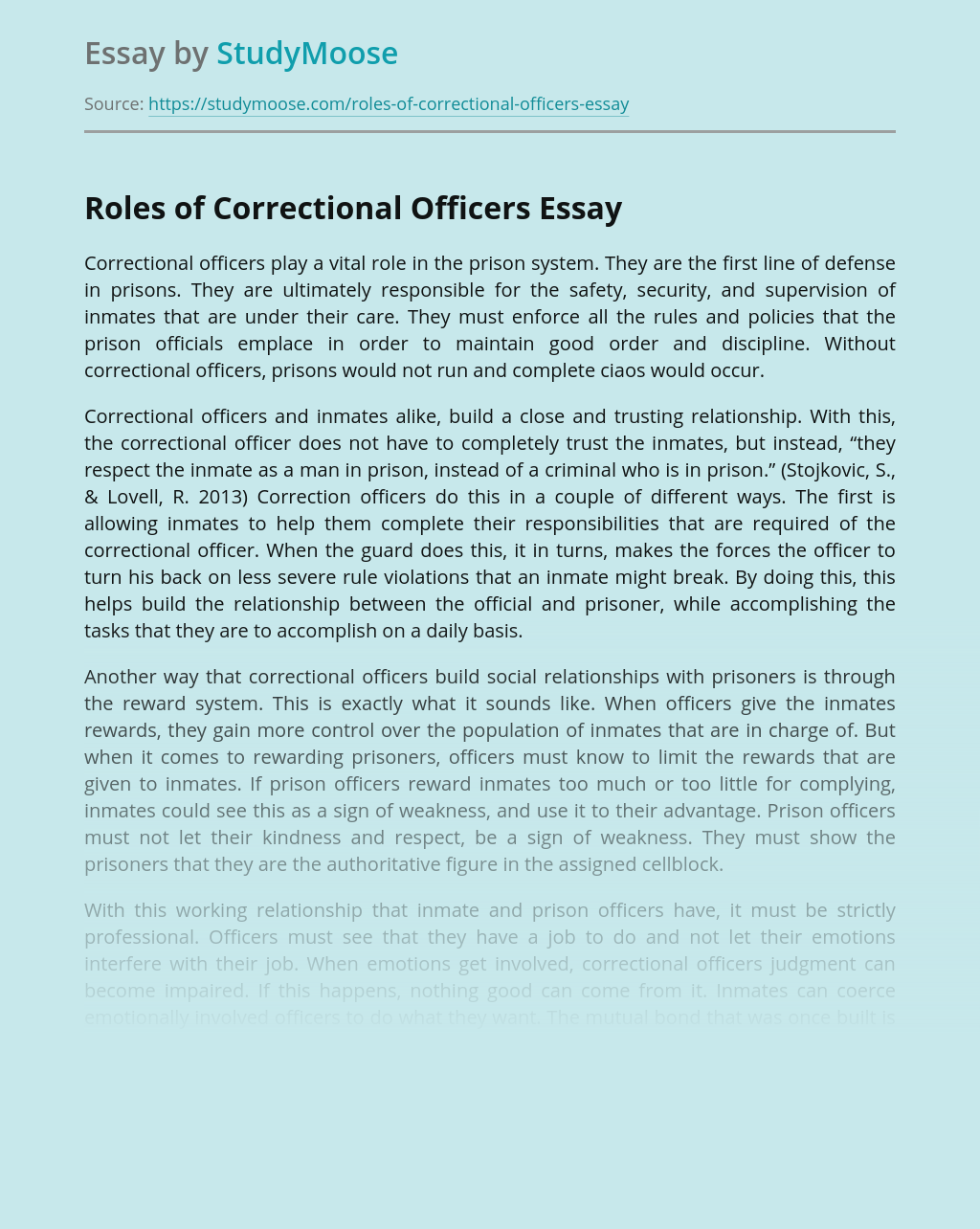 Turn in your highest-quality paper
Get a qualified writer to help you with
“ Role of Correctional Officers and Their Professional Behavior ”
Get high-quality paper
Helping students since 2015
Stay Safe, Stay Original