Isolation in The Metamorphosis

Franz Kafka’s short story “The Metamorphosis” centers on the theme of isolation. In the lead character’s transformation he experiences a deep isolation towards society now. What this isolation leads to is to a series of events, that cause Gregor’s isolation to grow. Eventually isolation leads to Gregor’s death. Isolation and its after effects are the central themes involved in the “The Metamorphosis. ” Isolation is the state of an individual being separated from other individuals. Isolation involves both the mental state of an individual and the physical state of the individual.

Turn in your highest-quality paper
Get a qualified writer to help you with
“ Isolation in The Metamorphosis ”
Get high-quality paper
NEW! AI matching with writer

Further isolation also involves the individual’s belief versus societies’ believes. This paper will argue that Gregor’s transformation into a bug is a symbolic representation of one’s difficulty in accepting the isolation reality. The notion of the isolation is first realized in the author’s work in section . The reader can see that Gregor’s isolation started before the transformation occurred when Gregor mentions “That’s all I’d have to try with my boss; I’d be fired on the spot.

Anyway, who knows if that wouldn’t be a very good thing for me.

If I didn’t hold back for my parents’ sake, I would have quit long ago. ” It is at this point that the reader realizes that Samsa was mentally isolated from the society he lived in before the transformation occurred. Gregor had wished to be free from work long before his transformation occurred, but society expected Gregor to work and to provide food for his family, something that Gregor didn’t want.

Gregor’s isolation before the metamorphosis occurred was that he wanted freedom and society wanted him to work.

By Gregor showing different believes than the rest of the society the reader realizes that Gregor was somehow already a loner even before the transformation occurred. The notion isolation also affects Gregor in section III. Some readers believe that Gregor Samsa’s experience is centered on Morality and Ethics. These people believe that Gregor is treated different because he is no longer a human in a physical state. However this notion limits the whole picture of why Gregor is treated differently.

Gregor’s isolation towards society is true picture why he is treated differently. If the other notion of morality and ethics were to be chosen many aspects of “the Metamorphosis” would be lost. These lost would be would be the ability of the reader to see how isolation has both affected Gregor inside and outside. My notion of “the Metamorphosis” portrays events in the past that show Gregor’s isolation were morality and ethics notion lacks of. Many notions in the past have been presented to try to present what Kafka’s “The Metamorphosis really portrayed.

Isolation in The Metamorphosis. (2016, Jul 06). Retrieved from https://studymoose.com/isolation-in-the-metamorphosis-essay 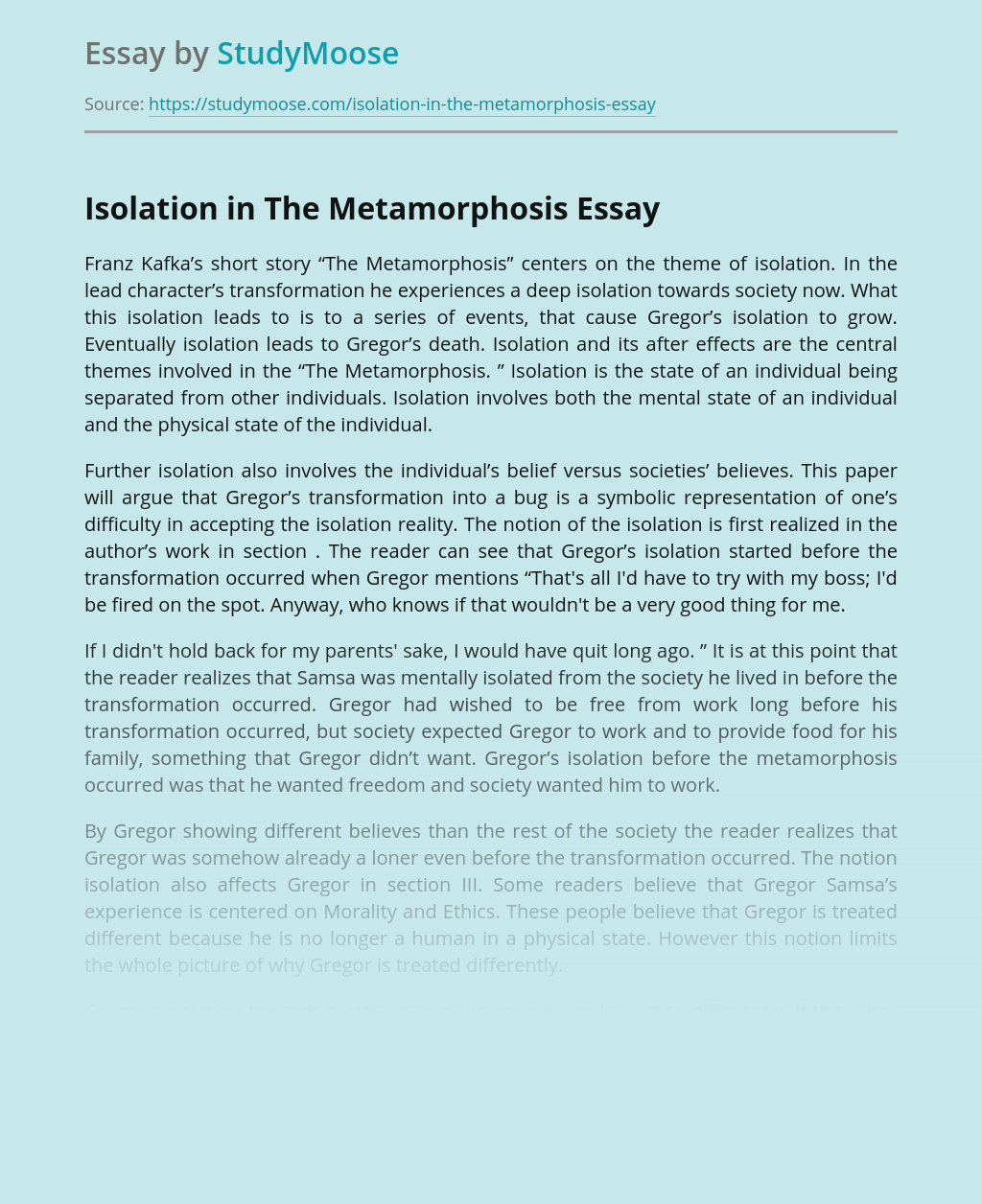 Turn in your highest-quality paper
Get a qualified writer to help you with
“ Isolation in The Metamorphosis ”
Get high-quality paper
Helping students since 2015
Stay Safe, Stay Original