Is the constitution effective?

At the Philadelphia Conference, where the constitution was signed and put the final touches on, the men who created the document wanted to make sure that monarchy would never rule over anyone of the U.

S. again. The founding fathers did this by creating a separation of powers, with 3 branches of government; Executive, Legislative, and Judicial. With powers separated between these branches, it would ensure that the country would never fall under tyranny, and it never has. State and federal powers were also separated, giving state governments a little freedom to make their own laws, but still abide by all of the national laws as well.

The founding fathers of the Constitution tried their best to create an effective part of the government where certain powers were separated, and they did just that.

Civil liberties are basic rights guaranteed by laws or by a constitution. Usually when an American thinks of civil liberties, they think of the Bill of Rights, but the Constitution itself protects itself from tyranny.

Many articles and amendments in the Constitution were put there for the only reason but of the people, and to protect their rights. These articles and amendments cover everything from religious freedom to the right to a fair trail, the Framers really thought of everything the people needed to be protected from at that time. Some would argue that the Constitution was written for the society back in 1787, and not for a modern society, but a person’s basic needs to live are the same as they were in that time. Perhaps it is because of all of these rights Americans are given that they are taken for granted of.

After the Revolutionary War, the U.S. needed to break away from England, and create and image and identity for itself. The U.S needed to show that they weren’t Britain’s little colony anymore, it was a country with a strong government. The Constitution gave the United States the identity it needed. It is a strong document, giving the federal government power, while at the same time letting the individual states keep some of their sovereignty. After the Constitution was signed, the economy grew, the nation slowly came out of debt, and the United States earned respect, while showing how effective their new government was.

Is the constitution effective?. (2016, Jul 01). Retrieved from http://studymoose.com/is-the-constitution-effective-essay 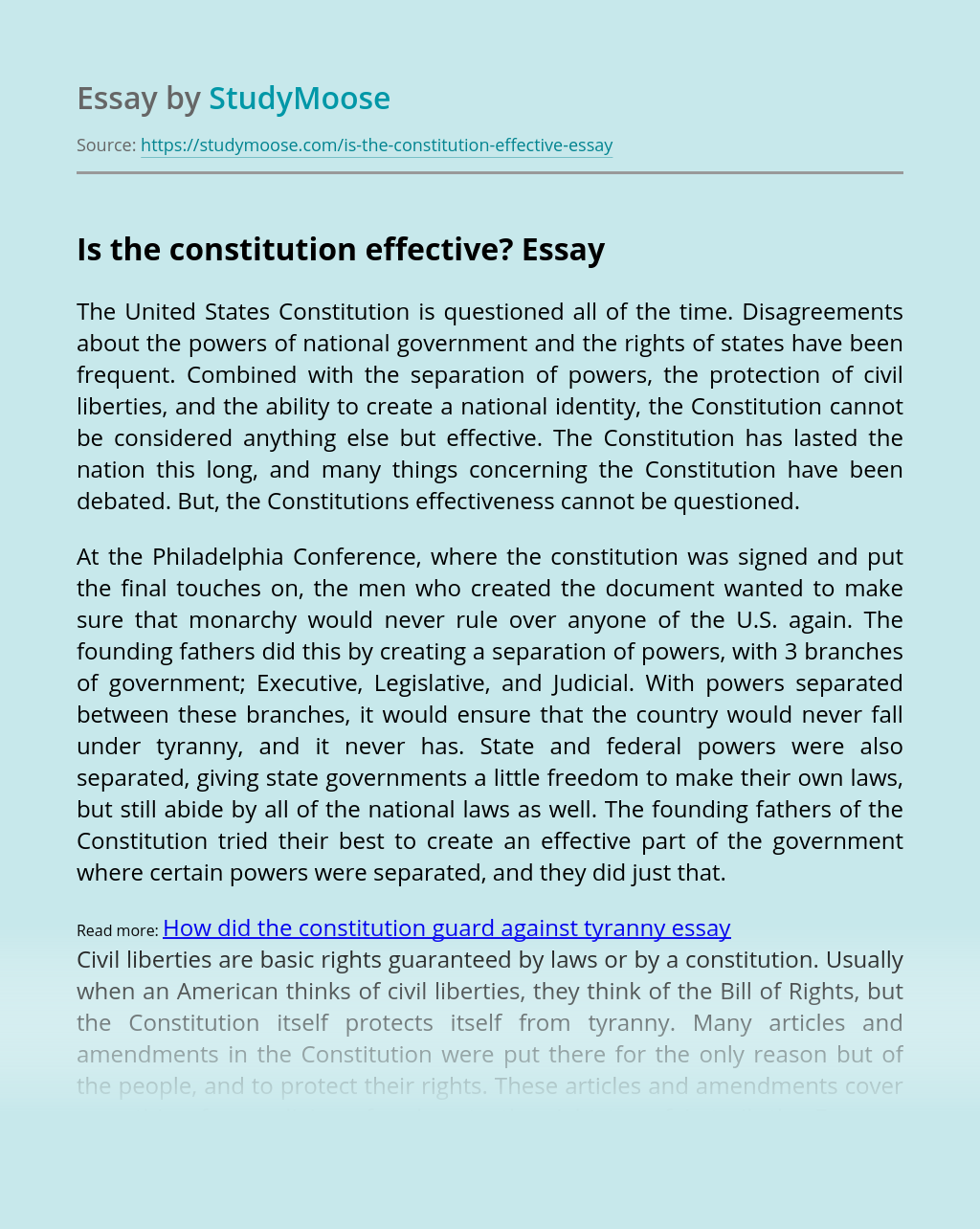 Don’t waste time
Get a verified writer to help you with Is the constitution effective?
Hire verified writer
$35.80 for a 2-page paper
Stay Safe, Stay Original