British Monarchy vs Government and Parliament

The British monarchy has always played an important role throughout history. It has managed to create such wealth and power such as the Golden Age of Elizabeth I. Within her 45 year reign she established the Church of England and saw voyages of discovery which lead to the accumulation of riches beyond its borders. The monarchy has also gone through various changes to throughout its realm such as the declaration of King Henry VIII as the only supreme head of the Church of England, separating from the Roman Catholic Church.

Turn in your highest-quality paper
Get a qualified writer to help you with
“ British Monarchy vs Government and Parliament ”
Get high-quality paper
NEW! AI matching with writer

Only through Britain’s history can its greatness and riches truly be shown. In the Glorious Revolution of 1688 the British monarchy was turned into a constitutional monarchy restricting the powers of the sovereigns. Ever since then, the monarch’s role and functions have been by convention, ceremonial. The British Parliament and the government, headed by the Prime Minister, are the ones who exercise effective political power.

Although the queen no longer has a political or executive role in the British monarchy, she is still regarded as the Head of State.

Through more than 1000 years of history, the title as head of state enables the monarch to assume constitutional and representational duties. As current Head of State, the queen must remain neutral in political matters and cannot vote or have a say in any elections. However, she does have important ceremonial roles in Parliament such as opening sessions of Parliament. The queen is also considered Head of State of Canada, Australia and New Zealand where, as a constitutional monarch, plays important symbolic and constitutional roles.

In addition, the monarch is recognized as the Fount of Honour. The queen alone has the capability of conferring titles of honour to those worthy of recognition as well as peerages, knighthoods and gallantry awards. In practice, most honours are decided by the government and most are political however the queen may offer honours at her own will. As a historical symbol of honour and greatness, a title given by a sovereign is regarded as great deal not only to citizens of Great Britain but to the entire world.

Back in history, the monarch played an important role in law enforcement around the UK. Therefore, the title of Fount of Justice was given to the sovereign. At present, the queen is no longer in charge of administering justice and, like other titles, she is still regarded as the Fount of Justice as a mere symbol of justice, law and order. However, the monarch may still issue a royal pardon if justice has been incorrectly imposed on a person. She does so on the advice of her ministers but may also do so on her own will as she sees fit.

The monarch is considered Head of the Armed Forces. In 1744, King George II was the last monarch to lead his army into battle. Since then, the monarch has left the battle to the generals who are now appointed by professionals. Those who join the army must swear allegiance to the crown. The sovereign is also the only one who can declare war and peace but can only do so at the advice of her ministers. The monarchy, other than being a symbol, may also hold various appointments and honorary ranks within the Armed Forces.

The queen is the Head of the Commonwealth which associates 54 independent countries which were formerly under British rule. These countries are voluntarily part of this international organization and are not forced to be part of anything by the monarchy. It is also a symbolic role which is important because it unifies these commonwealth countries and strengthens their connections, providing international co-operation and trade links. The queen continuously visits these countries in order to reinforce these relations.

Lastly, the queen is considered patron of many charities. The queen and the royal family play important roles in raising and donating money to various charities as well as encouraging the public to volunteer in such charitable activities. As inspirational figures, the involvement of the royal family in charities is a great influence to the public.

Through these various functions, we now see that more than anything, the monarchy is still important in today’s Britain because it represents stability, continuity, unity and national pride.

British Monarchy vs Government and Parliament. (2017, Jan 09). Retrieved from https://studymoose.com/british-monarchy-vs-government-and-parliament-essay 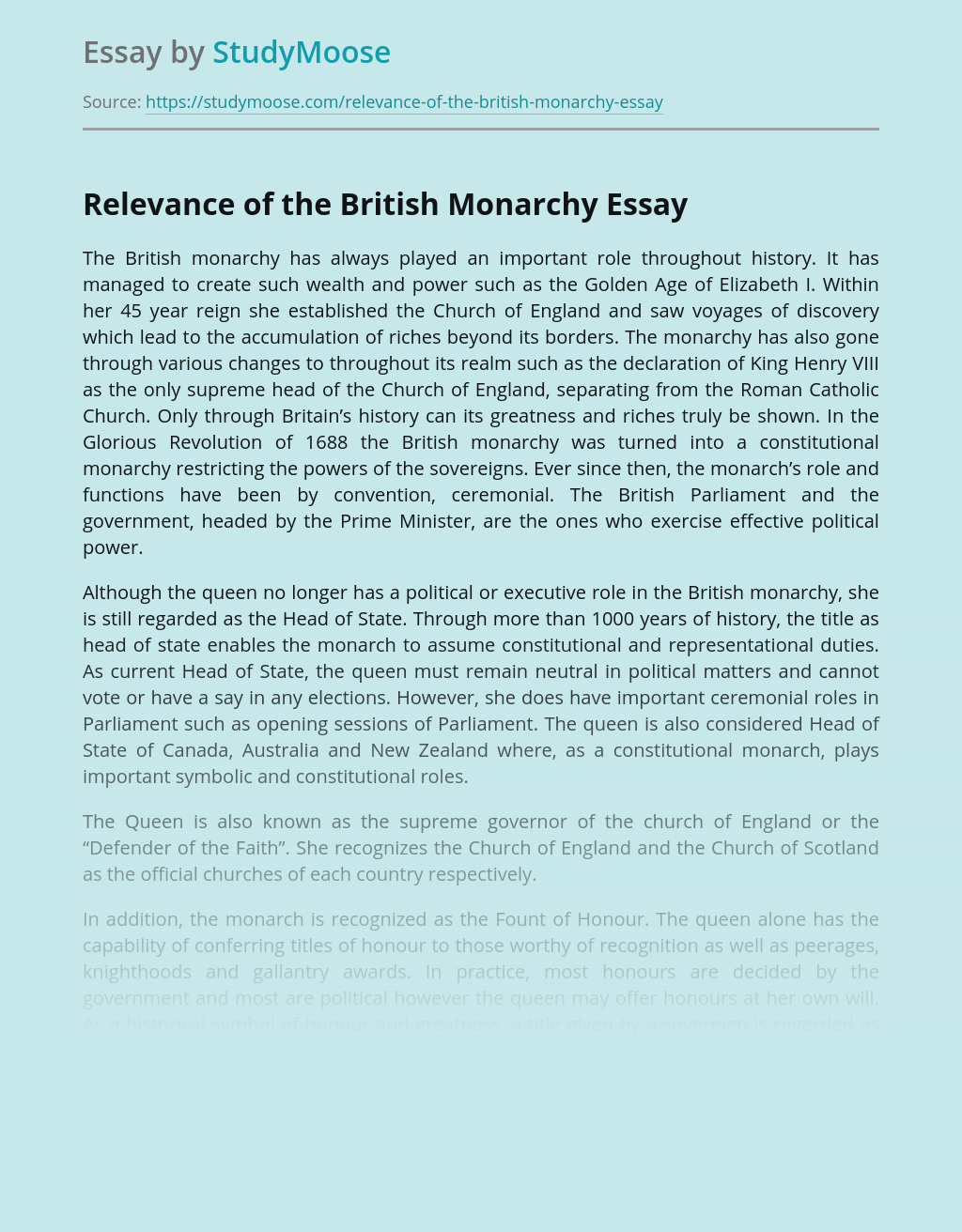 Turn in your highest-quality paper
Get a qualified writer to help you with
“ British Monarchy vs Government and Parliament ”
Get high-quality paper
Helping students since 2015
Stay Safe, Stay Original