Don't use plagiarized sources. Get your custom essay on
“ Democracy vs. Monarchy ”
Get custom paper
NEW! smart matching with writer

No matter how much you work you would never receive what your work for. This would make a person stop working, if he never keeps his money. If the country wants to keep its government fair, then they would try to preserve their government.

Democracy is a system of government for the people to choose their leaders and to hold their leaders responsible for their policies they enforce in office. The people decide who will represent them in congress and or parliament who will head the government at the national and local levels.

They do this by choosing between competing parties in regular, free and fair election. In a democracy, the people are superior and they are the highest form of political authority. Power flows from the people to the leaders of government, who hold power only temporarily. Laws and policies require majority support in parliament, but the rights of minorities are protected in various ways. The people are free to disapprove of their elected leaders and representatives, and to observe how they conduct the business of government.

Elected representatives at the national and local levels should listen to the people and respond to their needs and suggestions.

A monarchy is a governmental system that has one person as the permanent head of state until he or she dies or gives up his or her position. Typically, the position of monarch is hereditary, as is the case with famous monarchies like that of the North Korea. The term is often used to refer to a system of government in which the monarch, such as a king or queen has absolute authority, but many monarchies are limited. In which the monarch has restricted power and might even be mostly a figurehead rather than a ruler. One aspect of a monarchy that is considered to be an advantage is that it can reduce the struggle for ultimate power within the government.

When the head of state must be elected, members of different political parties will compete for the position. This often creates division and conflict within the government. If the head of state serves for life and his or her descendant is already known, it might increase the unity within the government. In conclusion, Democracy is the fairest type of government. This let the people be able speak their mind and what they believe in. However, in a monarchy the ruler is the king or queen and is considered to have absolute power. This creates many problems throughout a country. The ruler receives its authority by inheritance. This means it is passed down to the next member in that family. A person would preserve their work to maintain fairness throughout its country. If the government starts to be ruled by one person, then power would stop work to make things change.

Government’s history may not exactly be known but it is safe to say that government is as old as human society itself. At some point in the past ‘“ as the population grew in a particular area, there was pressure to have a system of laws that the society members had to follow since chaos would reign in a society if there is no governing body to set guidelines to its constituents. Public order and maintenance of security is vital to every society.

Larger populations would demand more complex set of rules and as society grows, governments also evolve. In different regions and in certain points of time, different types of government flourished. It should also be mentioned that government is constantly changing as history had shown.

Monarchy is a form of government which was very common during ancient and medieval times. Supreme power is bestowed on an individual and it can be absolute or nominal. The ‘head of state’ of a land with this kind of government often holds the title for life or until abdication. The leader, who is called a monarch, is wholly set apart from all other members of the state. The monarch typically makes all the law and decisions (legislative, judicial, and executive).

The above is in definite contrast to Democracy. Democracy is a type of government carried out by the nation’s people either, directly or indirectly. A rare subtype is ‘Direct Democracy’ but only feasible to a small area and with a small population. The common way of practicing this type of government is by giving the power to govern to elected representatives.

Democracy is based on a principle of equality and freedom. Equality defined in terms where all citizens are all equal before the law. Basically, positions and statuses do not matter; when one breaks the law, he or she is subject to sanctions. Monarchy is different in a way that higher officials – especially the monarch ‘“ are often not restricted by the law since they make the law themselves without further deliberation.

All citizens of a democratic nation are promised certain legitimized freedoms and liberties, which are generally protected by a constitution. Monarchy may also give this privilege but it all depends on the preferences and inclinations of the monarch.

However, monarchy of the new times is not defined in terms of unlimited political power anymore as it has evolved to a more citizen-friendly government. Now there are constitutional monarchies and this somehow blurred the lines between the principles of democracy and the defining roots of monarchy.

The common characteristic of monarchy is that rule is passed on through the next of kin ‘“ ‘Hereditary Rule’. This is in complete contempt to the principles of democracy where people’s choice is the governing code.

1. Monarchy is a form of government where a state is headed by a monarch while democracy is a government headed by elected representatives. 2. Power and position is passed through heritage and bloodline in Monarchy while democracy principally supports elections (people’s choice). 3. In monarchy, supreme power is given to an individual while in Democracy, the power to govern is directly or indirectly carried out by the people. 4. In Democracy, all is equal before the law while in Monarchy, the monarch is the law. 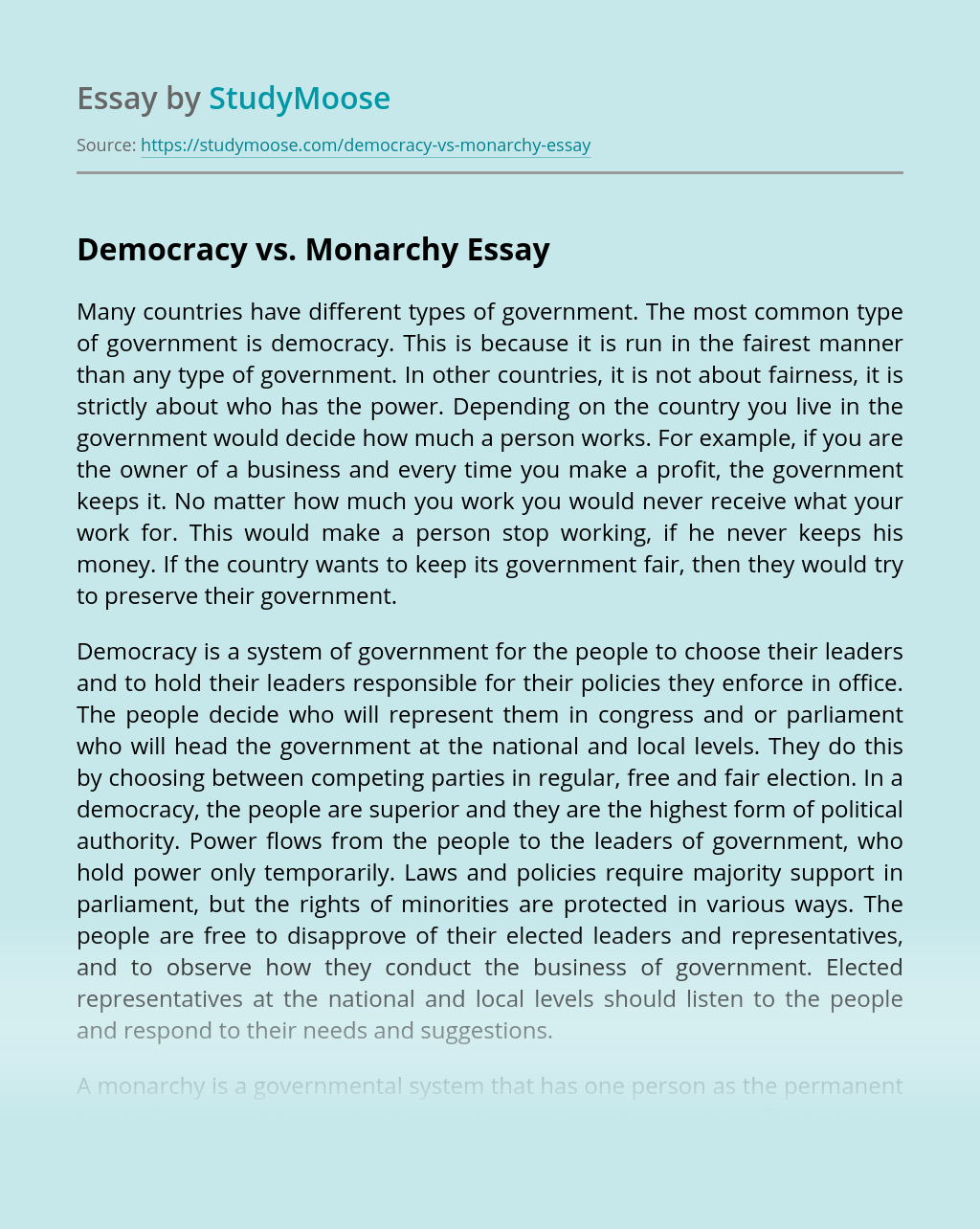