Comparison Of ?Charles I And Louis XIV

King Louis XIV: Outstanding example of absolute monarch Aim to make himself supreme in Europe Stringent religious toleration (change the Huguenots) King Charles I: Devine right of Kings (monarch’s right to rule came from God) Conflicts with Parliament forced religion Wars There is an institution as old as the world : Monarchy-Kingship. In most places and in most times men have agreed to be governed by Kings, having found in such government something consonant to their nature.

Early years of the Kings

A child born in the turn of the sixteenth and seventeenth centuries, at the end of the year 1600, was to inherit this hitherto unquestioned office, and apparently to inherit it undiminished in reputation or effect.

Don't use plagiarized sources. Get your custom essay on
“ Comparison Of ?Charles I And Louis XIV ”
Get custom paper
NEW! smart matching with writer

He was to come to the kingship of his fathers in true descent of the Blood Royal, and , destined as it would seem, to administer as those before him had administered and to hand on this same power and majesty to his posterity.

Yet in the lifetime of that child- and it was not a long one, monarchy in England crumbled, or rather was destroyed. He himself acted that tragedy and took the tragic part therein.

First he was thwarted by his more powerful subjects through his early years, from the day when as a young man of twenty-five he came to his own when he had not long passed his fortieth year. They gradually destroyed his national forces, they triumphed over him, they belittle him by one humiliation after another, and at last, before he had reached his fiftieth year, they put him to death.

With him died the English monarchy- he was the last ruling King of England, the last who goverened as Kings had goverened for untold years. His virtues destroyed the Crown of England and the power thereof.

Parliament meant then the old national council of very wealthy men surrounding the Crown, the Bishops and the greater Lords, supplemented in rare and especial fashion by a group of delegates – clerical and lay – which delegates wer thus especially and occasionally and exceptionally summoned for the purpose of making especial, occasional and exceptional gifts, not as of right but as of grace, to the King. Can help a king with a grant when unable to fund attacks. Grants made by a summoned parliament were only gifts, not permanent in character.

Complications with France and Spain. England at peace for 20 years before the reign of Charles I. Nation had been rolling in wealth, a long stretch of prosperity and content. But with war must come gravely increased financial strain. Parliament was called and though it was all in favour of open war against Spain, it did what might have been foreseen- it began at once to quearrel with the Government’s demand for money.

Charles began his reign with lack of experience, lack of opportunity to watch men, lack of knowledge for judging them. His few principles were absolute, and that was a strength in him.

When potential rebellion, eventually turning active rebellion arose, Charles needed army and support of common people. Religious struggle against Catholicism. The first Parliament of Charles (for purposes of unity and support of nation) began the revolution among Scottish Revocation. Reformation in Scotland posed threat to nobles and Charles’ solution to the problem only founded troubles between Scottish that would arise in the future.

The first Parliament of he reign had met in the first year, 1625, and after is attack upon Catholicism it had to deal with the necessities of the Crown. No one had demanded a war with Spain more eagerly than these same great landowners, or at least those who counted most among them and who led the bulk of the rest; but to carry on suck a war, even only by sea, would mean a voluntary aid to be granted by the rich in addition to the insufficient regular revenues of the Government. Their desire to show their power over the Crown was too strong to be denied; they knew that the fleet which was being prepared for the attack upon Spain would cost close upon a third of a million pounds.

Parliament dissolved after the lives of the members were endangered because of pestilence in London and attendance was reduced by three-quaters. War with Spain continued and country was in need for supply. Supply of some sort was an absolute necessity. An attempt to raise money produced nothing sufficient, and second Parliament of Charles met. The Parliament made itself famous, or infamous, bu the impeachment of Buckingham. A week later, there was no more to be done and Parliament was dissolved. A first lunge had been made and parried; the next one would be deadly.

The Government of Charles

The Government of Charles was approaching war with France. Many things were combining towards hostilities between Charles and French brother-in-law, Louis XIII. There was the purely personal set of grievances, the strong feeling of Louis that he had received a private insult through the action of Charles when the Treaty was broken, the quarrels with rights at sea because France yet had no navy. All these causes were at work, and the last was almost sufficient to explain why, though the government was at the last gasp for money and was already saddled with the Spanish conflict, it should have undertaken on more throw, and added the French Court to its enemies. The King in his desire to sooth the Parliament now pose not only as the mediator between the French Kind and the great Protestant families, but also, more recently, as the protector of the French Protestants at large.

The war turned disastrous and changed course of English history, or at least deflected it. It failed; and its failure was the loss of one more prop from the tottering structure of kingly power in England. Now indeed would the two Houses when they should be summoned be encouraged to charge home against the King. There was an argument that Charles had failed a third time. The straights of the Government for money grew worse and worse, it was impossible to withdraw from the war without ruining the position of England. Not without dread and hesitation the Council decided to risk yet another Parliament.

The third Parliament met in 1628 and Charles addressed them with a speech from the throne. He told them that it would be his duty to see to the safety of the State whether they did their duty or no. The commons demanded a permanent law called “Petition of Right” and commons demanded such through a revolution. Petition of Rights demanded a restraint on will of King and the hamper of executive control. It also more importantly demanded the King to recognize the possessions of his subjects through individual ownership. To admit these petitions was to destroy the power of the crown, and to fight the revolution proved equally as disastrous. It was ruin either way. Charles made an effort of delay, but the lords resented him and supported instead the commons.

Comparison Of ?Charles I And Louis XIV. (2016, Jul 15). Retrieved from http://studymoose.com/comparison-of-charles-i-and-louis-xiv-essay 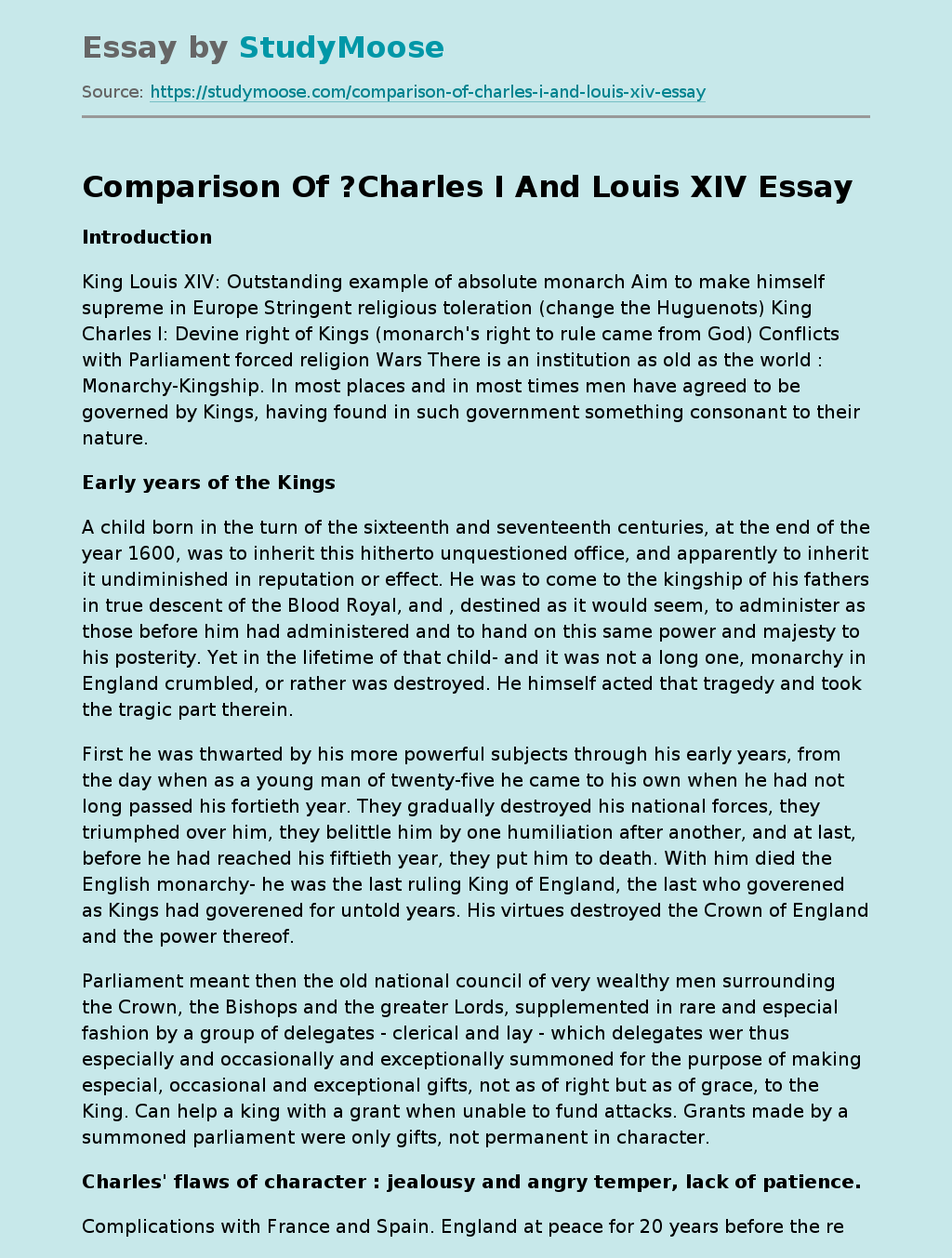