How effective is Parliament in fulfilling its functions?

Turn in your highest-quality paper
Get a qualified writer to help you with
“ How effective is Parliament in fulfilling its functions? ”
Get high-quality paper
NEW! AI matching with writer

One function which Parliament can be deemed efficiently satisfying is its representation. A major obligation of Parliament is to represent each and every person within the nation, and individuals within Parliament would certainly argue they are doing so.

Each member of Parliament is there because they have been elected by the public to be there, and as a result they are representing the people within their constituency.

This means that each person within society has a representative and someone who is echoing their views in front of the people who matter – those in Parliament. Furthermore, not only are the people being represented, but they are being represented by politicians who have expertise and are highly educated, meaning their representation is further improved. However, it can be argued that Parliament is in fact ineffective in fulfilling its function of representation. This is for a number of reasons. Firstly, the House of Lords, a major element of Parliament that has a huge say in decisions that are made, is made up of unelected citizens.

How effective is Parliament in fulfilling its functions?. (2016, Sep 02). Retrieved from https://studymoose.com/how-effective-is-parliament-in-fulfilling-its-functions-essay 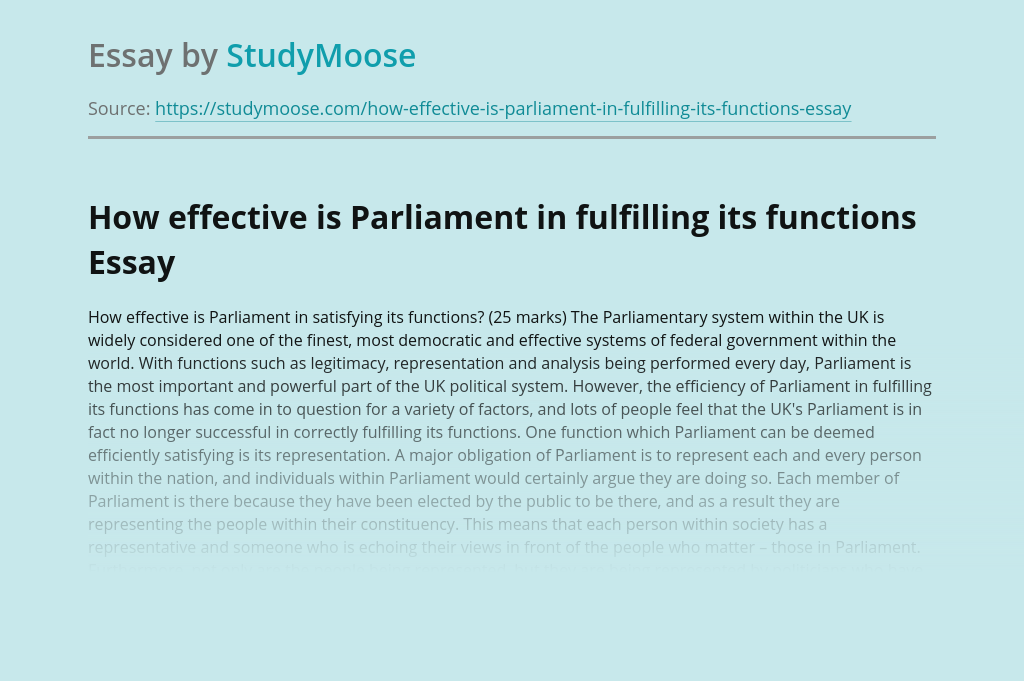 Turn in your highest-quality paper
Get a qualified writer to help you with
“ How effective is Parliament in fulfilling its functions? ”
Get high-quality paper
Helping students since 2015
Stay Safe, Stay Original