The television has become such an integral part of homes in the modern world that it is hard to imagine life without television. It provides entertainment to people of all ages especially children. Children love to watch TV and prefer to stay “glued” to the TV screen all day, rather than playing outside. In the USA, 47% of children ages 2 to 18 years have a television set in their bedrooms. On a typical day, they spend on average of 5. 5 hours using media, including television, computer games and the Internet (Kaiser Family Foundation, 2001).

TV is the number one after-school activity for 6 to 17 years old.

Although television is loved by children and has helped them a lot, it has influenced them in a negative way. Some optimistic people can argue that children should be allowed to watch a lot of television because it is educational. Preschoolers can get help to learn the alphabet on children’s programs such as “Takalani Sesame” and grade scholars can learn about wildlife on nature shows.

However, with the increased rate of working parents, most children come home from school and are left alone or with a babysitter who may not care what the children watch on TV.

With no supervision nearby, children may end up watching shows with violence, sex and bad language. Children that view such shows are likely to fear that the world is scary or that something bad will happen to them. Furthermore, the children will start to show aggressive behavior or start to behave like what they see on TV.

(Bandura & Ross 1963) Television has become such an integral part of homes in the modern world that it is hard to imagine life without one.

It provides entertainment to people of all ages, especially children, who, consequently would prefer to stare at the TV screen all day rather than going outside to play anymore. An online journal that I read called Journal of Youth and Adolescence states that television is an easy and inexpensive way to get information, it’s the most popular way for Americans old and young to get informed. Informed on what? With the increased rate of working parents, most children come home from school and are left alone or with a babysitter who may not care what the children atch. With no supervision nearby, children may end up watching shows with violence, sex, and bad language.

The journal then goes on to say that TV allows us to create a national culture because it gives people something in common to talk about. I hear it everyday, most people are talking about their comedy shows that they watched the night before rather than what they saw on the nightly news. In this generation we have to many choices. The journal also stated that children have a choice on what to watch and how long they watch television.

For me, this argument is unrealistic because most children do not have self discipline. They would rather watch something entertaining rather than a documentary about nature or history for example. They would rather watch the latest “Transformers” movie which is not suitable for young children. Firstly, children’s thinking skills can be adversely affected if they watch inappropriate television programs for a long period. According to Sharif (1999), short segments with interesting presentation in modern children’s programs and music video clips encourage the development of short attention spans in children.

Children may have the wrong thoughts that overwhelming all the difficulties in life will be a piece of cake as they are used to thirty minutes problem-solving programs like ‘Friends’. As a result, they always lose out patience when it is the real time for them to counter the hardship and rigor situations. Moreover, Jones claims that children who are heavy viewers are among the lowest achievers at school because they do not develop imaginative skills to create fictitious characters, situations and make-believe worlds (Leigh 2001).

In short, excessive television watching hours may plague the healthy thinking of the children Secondly, the structure of children’s behaviors’ will be less desirable, particularly the emanating of wildness and violence. Television programs and even the news, televised at prime time, depict violence scenes which may cause the children to become desensitized to violence (Sharif 1999). Consequently, they may feel that violence is a plausible and acceptable way in solving problems. Furthermore, some children attempt to imitate the superhero in the television shows they have watched.

For instance, there were children jumped out of trees in Superman costumes and got themselves injured (Sharif 1999). Besides, the stereotyped movies showing the narrow roles of characters played by the women and men in society influence the children’s behaviors’ towards themselves and others. These evidences prove that television viewing can be actually harmful by forming disfavor behaviors’ among children. Prolonged periods in front of the television which is a sedentary activity can trigger many health problems such as obesity and related diseases.

Nowadays, people, especially the youngsters, become inured to the habits of indulging themselves with snacks while watching television (Rutherford 2002). The elevated number of couch potatoes is intractable as it spreads erratically without control. Meanwhile, extended periods in front of the television mean that children are not being physically active (Sharif 1999). Moreover, children may become autistic as television viewing encourages the development of antisocial behavior. Briefly, obesity will become the most discernible fallout when children consume too much calories, adding to the dearth of physical exercises.

Is Television a Bad Influence on Children. (2016, Oct 01). Retrieved from http://studymoose.com/is-television-a-bad-influence-on-children-essay 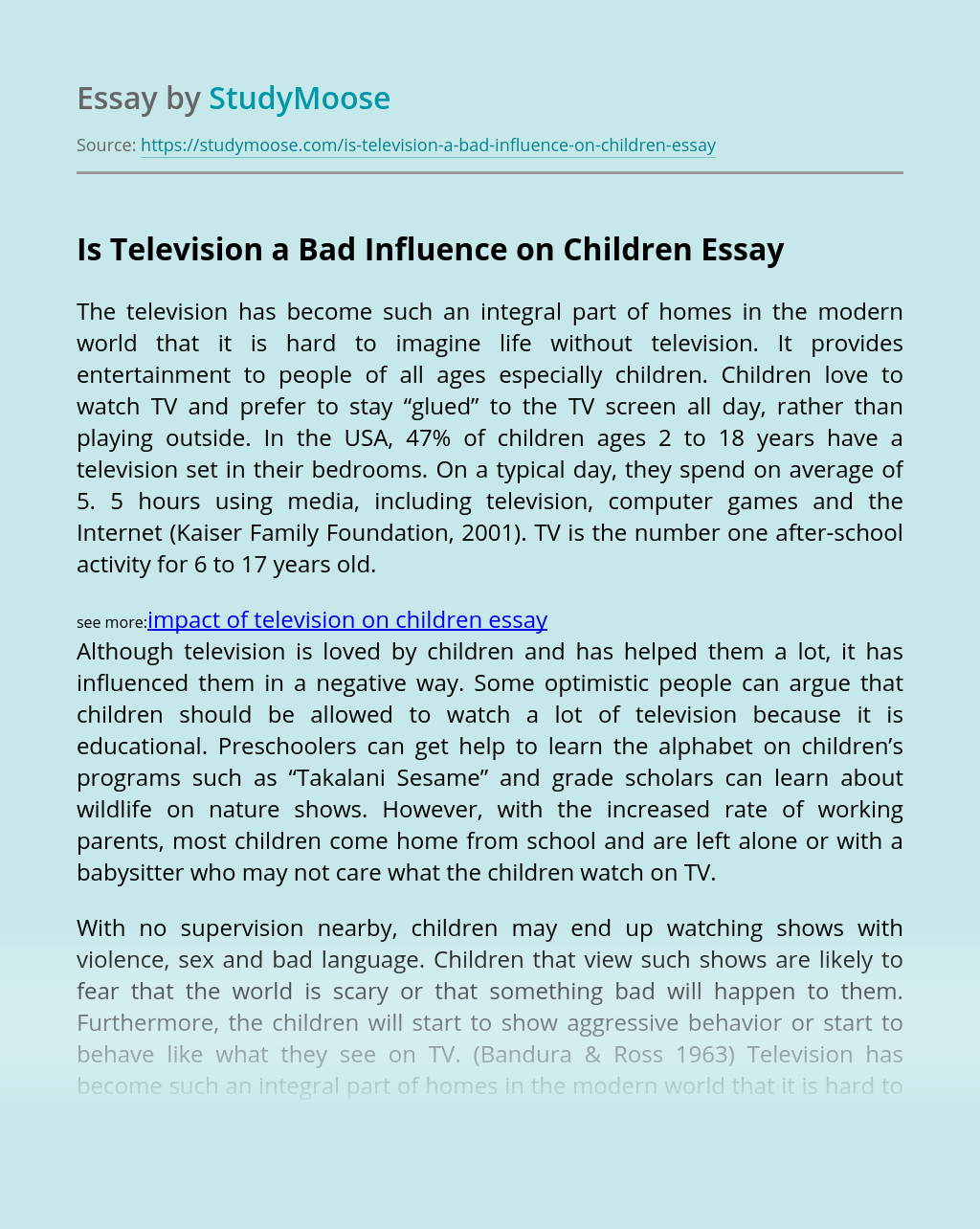 Don’t waste time
Get a verified writer to help you with Is Television a Bad Influence on Children
Hire verified writer
$35.80 for a 2-page paper
Stay Safe, Stay Original