With the advent of satellite broadcasting technology during the mid 1970’s it became possible for Television networks to air their programs all over the world. By the 1980’s, Television established itself as a powerful medium of communication and new strategies were devised by television companies to stay ahead in the game. One such strategy was the development of programmes that targeted specific sections of the community. A few of the television channels decided to focus on children and began developing programmes that would appeal to them.

Don't use plagiarized sources. Get your custom essay on
“ Cartoon Channels ”
Get custom paper
NEW! smart matching with writer

It was to leverage this niche market that channels like Cartoon Network came into existence. It was launched in October 1992 in the US by one of the world’s leading media companies, Turner Broadcasting System. It offered animation programmes from TBS’s extensive library of more than 10,000 Warner Bros, Hanna-Barbera and MGM cartoons. Over the next few years the channel launched in different parts of the globe showing not only their famous cartoons, but also developing original shows.

As the pioneer in the Indian cartoon and animation market, Cartoon Network quickly gained popularity and had a huge fan base in the metropolitan cities. When Cartoon Network entered India, there were no established players and it was not very difficult for the Network to entrench itself in the minds of the children and register itself as a channel synonymous with cartoons. It established itself very quickly as a major player in the Indian satellite Television market and became a household name.

In the 1990’s the entry of other leading children’s channels like Kermit and Nickelodeon created intense competition and Cartoon Network had to rethink their strategy to stay ahead in the game in the Indian cartoon market. The strategy that it worked out was the emphasis on ‘localization’. It localized the content by dubbing its cartoons first in Hindi to appeal to the Hindi-speaking audiences and then taking its localization efforts further it introduced Tamil-dubbed shows in 2000. The first dubbed programme was ‘Toon Tamasha’ and very soon it started offering localized versions of its popular cartoons.

Localization is the key to success in television programming. Localizing the content to suit the needs and tastes of the audiences is the key to garner more viewership and television rating points. When Cartoon Network introduced Tamil-dubbed shows, Kathy McClaure, Vice President Programming, Turner Network, Asia, said, “The bringing in of Tamil-dubbed cartoons is to further reinforce Cartoon Network’s commitment to bring localized programming. ” Some of cartoon shows that were dubbed in Hindi and Tamil were Scooby Doo, Flintstones, Swat Kats, The Mask, The Addam’s Family, Johnny Quest and Captain Planet.

On account of its growing popularity it started its 24-hour non-stop service in July 2001. The 24-hour service was part of the channels global strategic mission to place cartoons and animation in level with general entertainment that appealed not just to the children but to the adults also. Today the appeal of cartoon network is not just to children between 4 and 14 years, but also to the teenagers and adults who constitute 30 to 40% of the channel’s viewership. Cartoon Network in India is the most popular cartoon dedicated television channel in India.

Chutti TV was launched on April 19, 2007 and is a 24-hour Tamil language television channel owned by the Sun Network. It is Sun TV Network’s first ever television channel for kids. The target audiences are children aged between 3 and 14. It is a free-to-air channel available on most local cable television networks. It broadcasts cartoon shows of foreign countries and networks translated into Tamil. Some of the famous and most popular shows are Jackie Chan, He-Man, Astro Boy, Avatar, Dora the Explorer, Bob Morane, Lucky Luke, Spider Man, Bumba and Danny &amp; Daddy.

Disney XD or Disney Channel is another famous cartoon channel and it telecasts cartoons like The Donald Duck Show, Dennis and Gnasher and television shows like Shararat Karishma Ka Karishma, Shaka Laka Boom Boom and many more. The Donald Duck Show is based on the typical Mickey Mouse Series and there are other shows like Chip and Dale, The Rescue Rangers and Dennis the Menance. POGO is a cable and satellite television channel created by Turner Broadcsting, a unit of Time Warner for India, which primarily shows animated programming. It was launched in January 2004 as a children’s entertainment hannel like its sister channel Cartoon Network and its primary target audience is children aged 3+ to young adults aged up to 40. 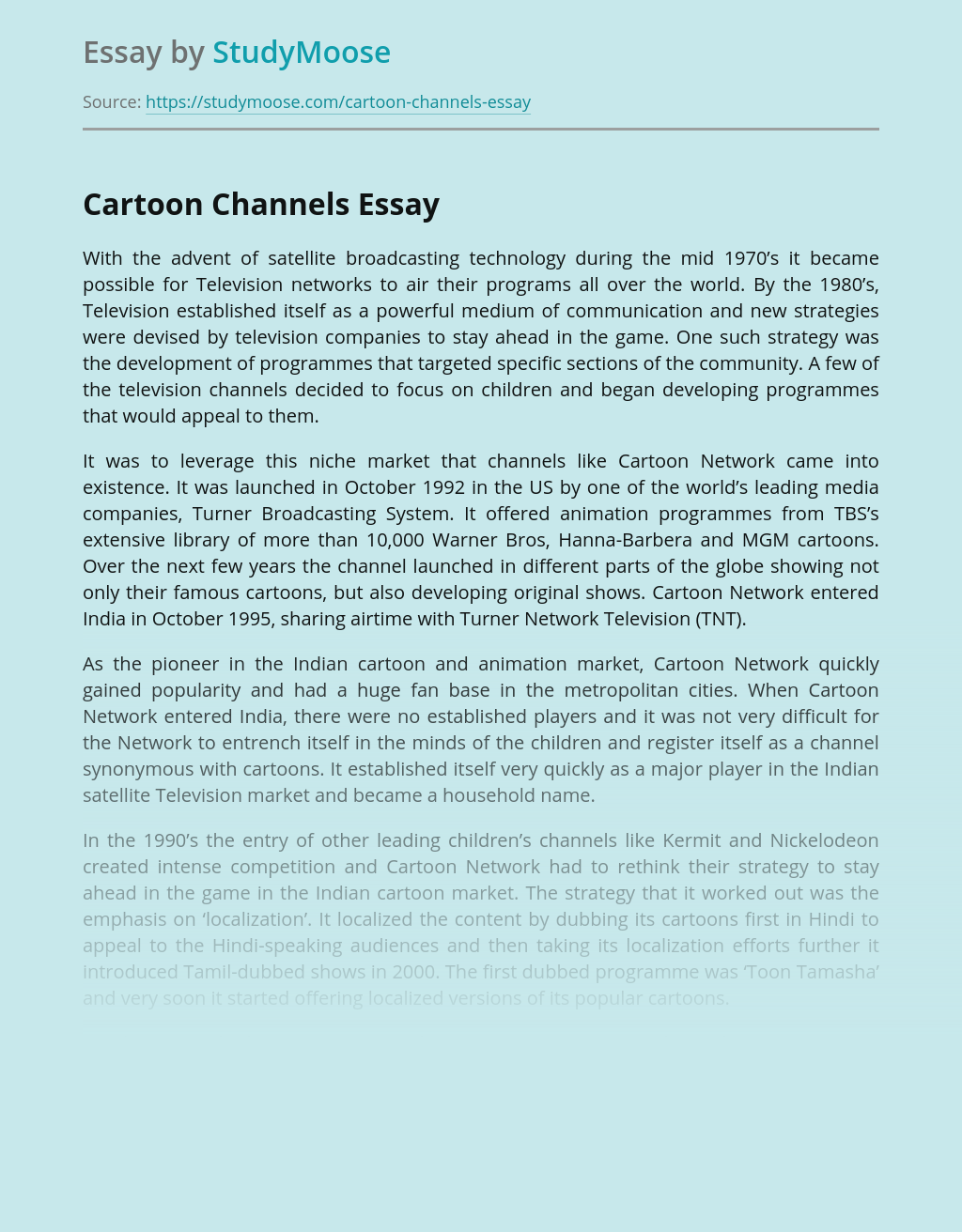