How Do Movies Or Television Influence People’s Behavior?

Great changes have taken place in human society along development of technology, and movies or television are a big part of this. Such entertaining methods affect on people’s behavior in many ways. I believe that television and especially movies are one of the major and outstanding achievements of humankind. Every movie makes an impression on people. How big this impression is depends on a person, his characteristic features, his weak or strong sides. Movies and television also can make people more violent.

Turn in your highest-quality paper
Get a qualified writer to help you with
“ How Do Movies Or Television Influence People’s Behavior? ”
Get high-quality paper
NEW! AI matching with writer

The more we see violent acts on television, the less sensitive we become to them.Eventually violence doesn’t seem wrong. We may even commit violent acts ourselves. This is especially true because we don’t always realize that violence has consequences. Actors can be killed and come back for another movie.

Sometimes we confuse that with reality. We forget that killing someone is permanent. Of course, watching movies and television can also be good for us. It can give us a broader window on the world.

For example, seeing movies can expose us to people of different races and cultures. We can then overcome some prejudices more easily. Recently there have been more handicapped people in films, and this also helps reduce prejudice. The best influence on our behavior is that movies and television reduce stress.

Watching films, we can escape our own problems for a little while. Also, sometime movies show positive ways to resolve problems we all face. While TV and movies shouldn’t be a way to hide from life, sometimes they can help us cope.

First of all, movies and television influence people’s thinking and action, especially the youth who are vulnerable. For instance, violence and sexual scenes result in young people cruel behavior. According to media, there have been serial murders which committed in school in China, and some scientists believed that the serious actions may involve in so many violence scenes in the media.

Secondly, people who spend too much time to watch movies or television can get addicted and tend to have sedentary lifestyle. They seldom do exercise and get fatter. Obviously, this is not good for their health and relationship between family members. Some housewives, for example, spend so much time watching tv that some of them forget to prepare meals for their family or neglect their children. This behavior may affect negatively on the family relationship.

In contrast, movies and television play significant role in entertaining people. Therefore, people’s behavior can change positively after they feel relax. In addition, some kinds of movies or TV programs contain moral value which help people distinguish between wrong and right. Furthermore some TV channels such as Discovery and Animal Planet can raise people’s awareness of environmental protection. Movies can lead us to high aims. They can have stories of people who made great sacrifices for their noble ideas. Thus movies teach us how important struggle is for success.In this connection movies on great people like Abrahan Lincoln, Winston Churchill, Kamal Ataturk and the Quaid-e-Azam deserve special praise.

Informative or educative movies are generally scientific,historical,political and cultural . Scientific films brings home to us new inventions and discoveries. They inform us about new adventures of man.These can be in our own language or in foreign languages. Historical and political movies inform us about the great empires like the Chinese and roman. Cultural movies let us know about religions, arts, literatures and traditions of different societies. Movies can have a negative influence in a number of ways. There are movies about criminals. They present their crimes in attractive ways. Movies with accidents and stories having negative effect upon character should be avoided.

The invention for television and movies influenced people’s behavior so much, wether that behavior is good or bad, they make them have new habits, new clothes and new information. For example when the young people watch movies like Super Man and Spider Man they try to do what they have seen in the movie, they will jump from high places which might harm them, ,or the people who watch the famous stars in the tv like Tom Cruez, or Madonna, trying to imitate their hairstyle and wear same clothes like them, those have absulotely obvious impact. In brief, movies and television obviously affect on people’s behavior. However if people can limit amount of time they spend to watch and choose proper films and channels, people will have benefits and can prevent the disadvantages.

How Do Movies Or Television Influence People’s Behavior?. (2016, Sep 28). Retrieved from https://studymoose.com/how-do-movies-or-television-influence-peoples-behavior-essay 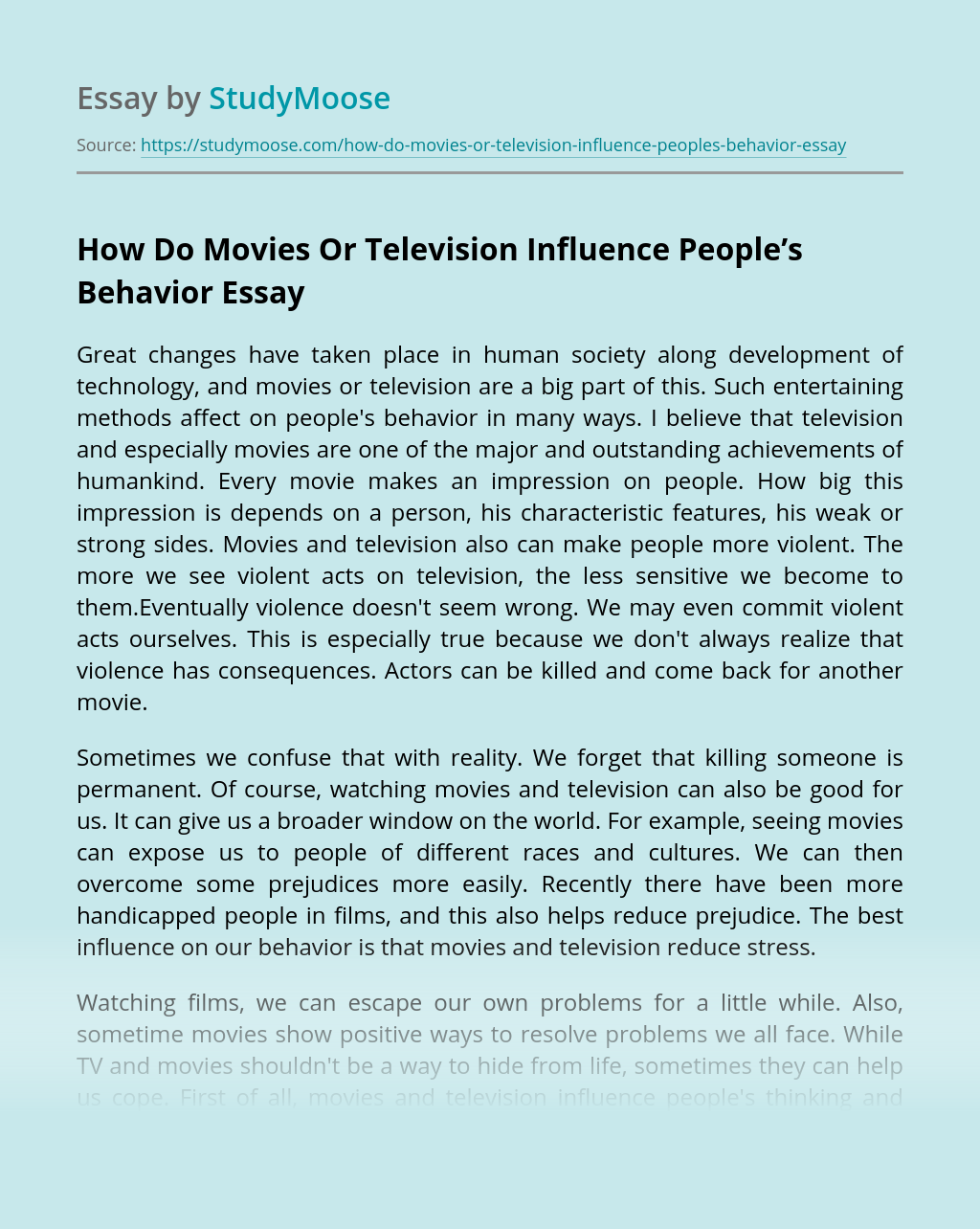 Turn in your highest-quality paper
Get a qualified writer to help you with
“ How Do Movies Or Television Influence People’s Behavior? ”
Get high-quality paper
Helping students since 2015
Stay Safe, Stay Original